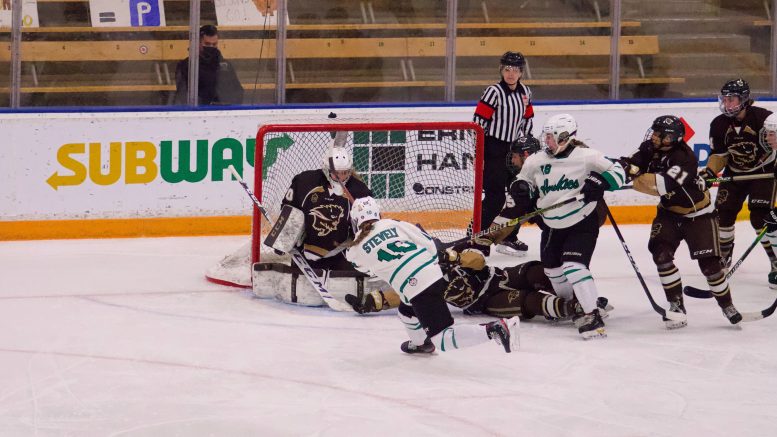 The Huskies came out firing in the first period of game one, hounding the Bisons’ goal for the majority of the frame. Midway through the first, the Huskies’ Abby Shirley tipped a rising shot past the short side of Bisons starter Erin Fargey, putting the Huskies up 1-0.

Four minutes later, the herd responded. On the powerplay, Vanessa Klimpke redirected a slap pass from Camryn Gillis glove side to even the score.

However, the Huskies did not let up, continuing to shell the Bisons’ net and dictate play in the second period. The Huskies forecheck wreaked havoc on the Bisons’ defence, forcing numerous turnovers below and at the blue line. Playing a tired defence, the Huskies had an easy time entering the Bisons’ zone. This was emphasized early in the period. On a Larissa Bohlken drop pass, Shirley danced past a forward and fired it short side on Fargey, giving the Huskies the 2-1 lead.

The Huskies steadily maintained the pressure in the third, which helped keep the Bisons’ offence at bay. Midway through the third, the Bisons caught a break.

Off some sustained pressure, the Bisons’ Ashley Keller fed a deceptive pass to Julia Bird in the slot. The first-year forward made no mistake, ripping a wrister past Huskies goalie Camryn Drever to tie the game.

Bird’s first Canada West playoff goal appeared to invigorate her teammates. After being outshot for the majority of the game, the Bisons turned up the offence. Playing with momentum, a Bison goal was expected at any moment.

Unfortunately for the herd, the Huskies would counter late. Picking up a bouncing puck on her own blue line, Huskies forward Kennedy Brown danced past the defender and streaked down the ice on a two-on-one. Brown sniped it top shelf, giving the Huskies a 3-2 lead with less than five minutes left in the game.

In a last-ditch effort to tie the game, the Bisons pulled Fargey for the extra attacker.

The Bisons were not successful, as Shirley broke away free with the puck and iced the game on an empty net goal, securing the hat trick and a 4-2 win for the Huskies.

The next day, Bison coach Jon Rempel outlined his changes in strategy for game two. Due to injuries, Rempel said he was forced to reconfigure line combinations in order to have a chance to win.

“We’re dealing with some things within the team in terms of some people not [being] healthy and whatnot,” said Rempel.

“We’re going to go with a little different configuration and try to shore up a couple of areas. I mean, it’s certainly not desperate, but there’s some things that we have to do here to try to give ourselves the best chance.”

This year’s iteration of the women’s hockey team features one of the youngest lineups in Canada West. With so many players having limited playoff experience at the collegiate level, Rempel says he is keeping it simple with his players.

“There’s not a lot to say to this point other than going through some stuff from last night briefly,” said Rempel.

“We’re going [to] probably have to start better […] and get our feet under us […] probably play with a little bit more desperation. The nerves are what they are with as many people that really haven’t experienced playoff hockey on this team, but I mean, you’ve got to find a way to play through that quickly.”

Game two got off to a physical start, with eight minutes in penalties shared between both teams within the first 12 minutes.

The Bisons appeared much more engaged, notching eight shots in the first period. Even so, the Huskies thus far had outplayed the herd, limiting the Bisons’ offence to low-quality scoring chances. Late in the frame, Sophie Lalor sprang on a breakaway. Skating alone all the way from her own blue line in on Bison goalie Kimberley Davidson. She ripped a shot blocker side to give the Huskies a 1-0 lead.

The second period saw the Huskies maintain its consistent offence.

During a mad scramble in front of the Bisons’ net, the puck squirted out to Huskies defenceman Brooklyn Steveley. The first-year made no mistake, wiring a wrister glove side and putting the Huskies up by two.

Later in the period after the Bisons killed off a Huskies five-on-three advantage, the Huskies persistently held the Bisons in their end. Working the puck down low, Bohlken found Brown in front, where the third-year forward easily tapped it in to make it 3-0 for the Huskies.

In the third period, the Bisons came out with desperation. Knowing they needed to score three goals to tie the game and prevent the season from ending, the Bisons laid it all out on the line. The herd had numerous chances, but Huskies goalie Camryn Drever was up to the task, stopping all nine shots she faced, giving the Huskies a series-clinching 3-0 win and ending the Bisons’ season.

Bisons impressive run comes to an end at nationals in Halifax