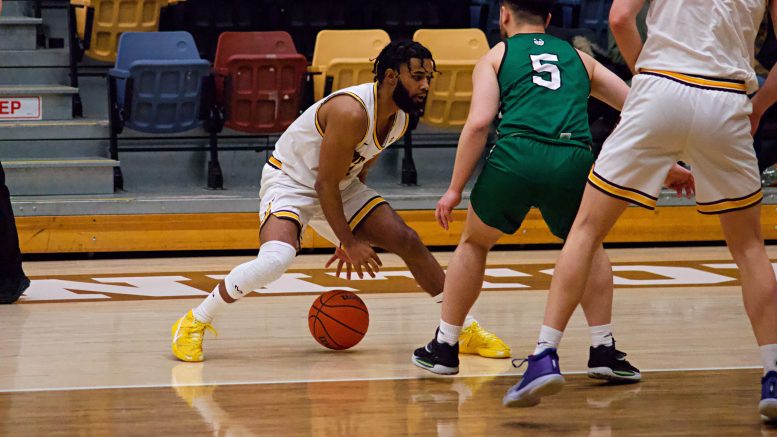 The University of Manitoba Bisons basketball teams participated in the Canada West basketball playoff tournament this weekend. Unfortunately, both teams were ousted early, with the men’s team eliminated in the first round and the women’s team getting knocked out in the second.

Ranked 10th in the conference, the Bisons were matched up with the number 17-seed University of British Columbia Okanagan Heat.

The Bisons got out to a hot start against the Heat early in the first quarter. Keiran Zziwa knocked down a nice jumper and Mason Kraus slammed home his first career dunk in the Canada West playoffs to get the U of M some momentum.

The Heat matched the Bisons’ intensity. UBCO’s Gus Goerzen was dynamic offensively, scoring a three, a jumper and a layup. Hafith Moallin and Liban Yousef were beasts in the paint, both getting to the line and rebounding well defensively.

With the UBCO up 20-17 after the first, either team looked like they could come away with a win.

However, in the second, the Bisons’ weaknesses began to show. A much more undersized team than its opponents, the U of M struggled against the much taller UBCO Heat. Utilizing its height advantage, the Heat recorded four blocks and 12 rebounds. Shooting well in the quarter, the UBCO got out to a 16-point lead late.

After a frustrating quarter, Kraus and teammate Wyatt Tait helped close the lead, each draining a three and scoring in the paint to make it a two-possession game at halftime.

In the third, the Bisons continued to be dominated by the Heat defence, being limited to 9 points in the quarter. The UBCO scored by committee, with seven different players finding their names on the scoresheet in the frame.

Down by 14 heading into the fourth, the Bisons’ playoff hopes and season were on the line. Zziwa led the comeback attempt for the herd with seven points, while Tait and Kraus each had five.

The Bisons women’s team was matched up against the University of British Columbia Thunderbirds in the first round of the Canada West playoff tournament on Friday.

Leading up to the game, second-year player Emerson Martin reflected on how the Bisons’ season has gone so far. Martin expressed the confidence she has in team heading into the playoffs.

“Overall, I feel good about our season [thus] far. We have been and continue to be competitive with top teams in the country,” said Martin.

“After looking at our matchups within our bracket, I’m very confident in our ability to be successful this weekend. I’m excited to be competitive with teams more western than us that we haven’t seen yet this season.”

For the first time, the Canada West playoffs take place within a 17-team single knockout playoff tournament. More teams than ever are competing to win a championship. Even so, Martin said the Bisons’ focus is internal. She said each player needs to fulfill their roles and exert as much effort as possible in order for the herd to be successful.

“In the weeks leading up to this weekend, we have been focusing on what we do well as a team,” said Martin.

“We play the best when everyone gives 100 [per cent] toward their role within the team. There has been minimal focus on our opponents and instead the focus has been on us and what we do well. Our foundation is strong, and to win games and be successful we have to execute as a whole.”

Lauren Bartlett led the way for the herd early on. Her three shots from beyond the arc helped get the Bisons out to a six-point lead after one.

The Bisons continued to shoot the lights out in the second, as Taylor Randall and Autumn Agar each knocked down threes to help the Bisons increase its lead. The herd was also stellar defensively, nabbing four steals and bringing down 10 boards in its own end.

Coming into the second half with a 14-point lead, the Bisons looked confident offensively. The herd continued to pile on the points, making six threes in the quarter. The UBC had no answer for the Bisons’ shooters, allowing the Bisons to protect a large point margin.

That lead continued to be upheld in the fourth. Without any momentum, the UBC was unable to make a comeback, losing 74-55 to the U of M. The loss eliminated the Thunderbirds from the Canada West tournament.

The next day, the Bisons faced off against the number five-seed University of Lethbridge Pronghorns.

Martin got the Bisons off to a good start with seven points in the first. Once again, Lauren Bartlett was excellent from the field, scoring a jumper and a deep three.

Fourth-year player Jessica Haenni responded for the Pronghorns by making a couple field goals and getting busy in the paint.

Haenni would continue scoring at a torrent pace in the second, recording nine points in the quarter. However, the Bisons responded well. Going 3-5 on three-pointers and 4-6 on free throws, the U of M executed when needed.

Heading into the third with a three-point lead, the Bisons looked like the better team. Despite this, the U of L appeared to be finding its game.

End-to-end action saw the score steadily increase. By the end of the quarter, the score was tied at 60 with either team looking like they could come away with a win.

There were eight lead changes in the fourth, as each team played at an electric pace and scored at will. After getting fouled on a made layup, Pronghorn forward Amy Mazutinec drained the free throw to complete the three-point play and give her team a three-point lead with just over a minute left to play.

Missed opportunities late forced the Bisons to attempt a three-pointer with less than 20 seconds left in the game. A rebounded shot was kicked out to Lana Shypit.

The second-year guard was forced to shoot an awkward shot. An inch off from the target, the ball rimmed out, falling into the arms of a Pronghorn defender.

The sound of the buzzer signalled an 80-77 victory was awarded to the University of Lethbridge, who moved on to the quarterfinal of the Canada West playoff tournament. For the U of M, the loss meant the end of its playoff run and season.