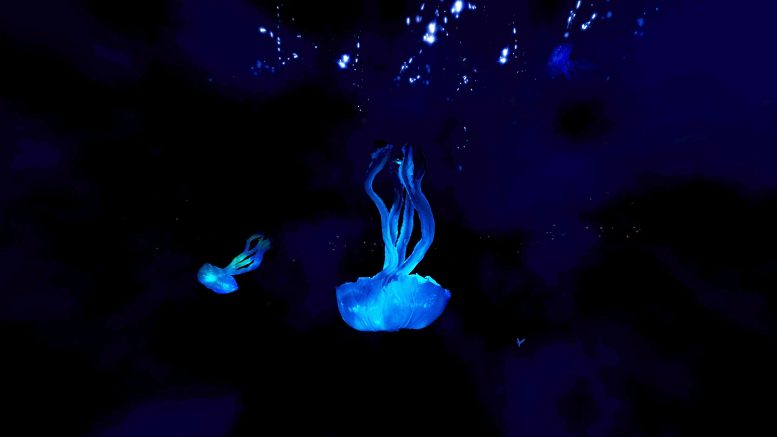 Image provided by the National Film Board of Canada

As the climate crisis escalates, it is important to remember the interconnectedness of nature and humanity. Adaptation has never been more imperative if we wish to continue to call Earth home and preserve the beautiful natural world.

Montreal-based interdisciplinary artist Frances Adair Mckenzie’s latest project, The Orchid and the Bee, is an artistic reminder of this connection.

A 360-degree virtual reality exhibit, The Orchid and the Bee is a five-minute artistic tour of Charles Darwin’s theory of natural selection — it is not the strongest that survive, but those best adapted to the changing environment.

The exhibit highlights the essence of nature through the repeated generation and degeneration of stop-motion plasticine puppets in the “primordial soup of life” — from stardust to life’s oceanic origins to land-dwelling mammals, flowers and bees.

Mckenzie emphasizes interconnection most through the image of the roots of flowers imagined as veins attached to organs, running through the earth.

The concept of nature’s origin from seemingly nothing is highlighted through the bottomless perspective of the 360-degree lens.

Watched online, the exhibit can be viewed in its entirety by changing the angle with the arrows on a keyboard or by clicking and dragging the screen.

The exhibit has been optimized for an Oculus Quest, but in the absence of a VR headset it can always be experienced in the form of your own museum space. By watching the exhibit in a pitch-black room with earphones in on your smartphone or tablet you can recreate the Oculus experience in a museum-like setting.

While the exhibit can be somewhat frustrating to experience in the way Mckenzie intends, finding the right platform is the best bet for the best experience.

The exhibit itself is beautifully done — the plasticine jellyfish are quite the highlight, and the falling stardust of the cosmos invokes a magical touch when looking up.

The sound and music are a bit ominous when juxtaposed against the beauty of the creatures and flowers on the screen, but this becomes more fitting by the end of the piece, where the universe returns to nothingness.

It is also fitting for the wheezing human face featured in the exhibit, which can be read as a depiction of humanity’s unwillingness to adapt when compared to the other creatures, which constantly transform from polyp to organism and back again.

In this way, the brief scene with the plasticine face accentuates the shortness of the time humans have spent on the screen of the planet’s history, whereas other lifeforms have managed to thrive throughout many millions of years.

Mckenzie’s exhibit, then, promotes environmental reform by situating adaptation as inherent to survival and implying that although on the surface a human may be more intelligent than a jellyfish, humans have failed to adapt to the changing planet — including the climate crisis they created. This raises the question: how intelligent is humanity if adaptation is the key to survival?

The project may come across as art for art’s sake, especially due to its potentially frustrating viewing format, but the simplicity of Mckenzie’s piece is a foil for much deeper questions about the interconnectedness of nature and humanity’s role and purpose within it.

The Orchid and the Bee is streaming for free on nfb.ca.