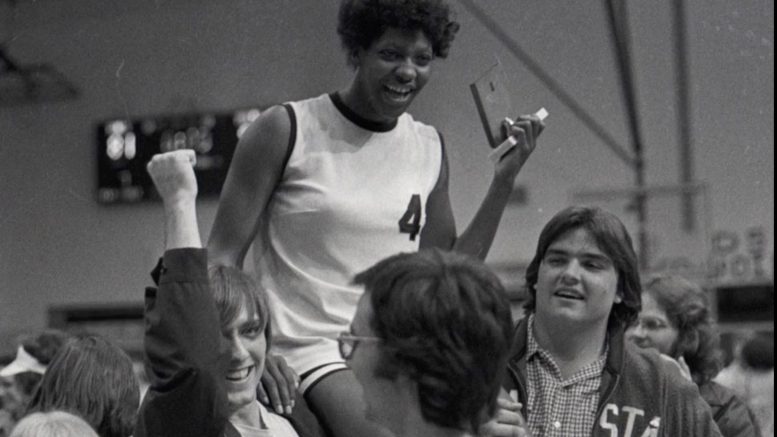 Representation matters. In fact, on the heels of some calling for the cancellation of women’s hockey in the Olympics because the scores are lopsided toward the North American women’s programs, an Oscar-nominated short documentary inadvertently showcases the ongoing struggle for women’s representation in sport while celebrating one of the greatest basketball players of all time.

The Queen of Basketball by Canadian filmmaker Ben Proudfoot is the inspiring story of Lusia “Lucy” Harris from her childhood in Minter City, Miss. to her induction into the Basketball Hall of Fame.

The documentary is a clinic in how to pack important information into such a short timeframe. In fact, the short format creates a captivating atmosphere where Harris’s history-making career stats come rapidly one after another.

Though teased as a child about her height — “long and tall, and that’s all” — Harris learned to love her six-foot-three frame through basketball.

Being the only family in her community with a basketball hoop, Harris was a basketball superfan from her childhood, staying up late on school nights to watch NBA games — especially her favourite player, Oscar Robertson.

Deciding to go to a university that had a women’s basketball program, Harris and company went on to win three consecutive national championships.

Harris became the star of the team, accumulating swaths of points every game, her height becoming her ultimate weapon for rebounding.

In another Canadian connection, apart from the director himself, Harris made history when women’s basketball was first implemented in the Olympics in the 1976 Summer Olympic Games in Montreal, Que.

Not only did Harris bring home a silver medal, she made the first basket ever in women’s Olympic basketball.

Harris was also the first and only woman officially drafted in the NBA. Though Denise Long was a draft pick of the then-San Francisco Warriors in 1969, then-NBA commissioner Walter Kennedy blocked the draft, making Harris the first official draft pick in 1977.

The then-New Orleans Jazz drafted Harris seventh overall. However, Harris believed her draft was “a publicity stunt” and decided against playing for the team.

Harris claimed she didn’t “regret not going” to the NBA, “not even a little bit.” However, the fact that there wasn’t a Women’s National Basketball Association clearly lingered for her.

This is the point that athletic associations still seem to struggle to understand: inequality is as simple as not creating opportunities for those underrepresented in sports.

As Harris said herself, the National Collegiate Athletic Association men’s basketball stars of her time that went on to become NBA stars were millionaires.

“I certainly would have had money,” Harris jokingly said.

These moments in the film are so important, such a short documentary speaking so loudly of the inequalities in athletics — from Harris having to choose a different university to attend simply to pursue basketball, to her basketball career ending because there were no opportunities for women in basketball outside of PR stunts.

In this way, The Queen of Basketball speaks to the importance of seeing someone who looks like you succeeding and being granted the same opportunities to pursue a goal to those already privileged enough to have them.

As for the film itself, the editing is superb. The pictures, old footage and newspaper clippings are a collage of an inspiring career.

The music is also perfectly synced with the action on screen — particularly the use of Vivaldi’s “Gloria” mass music during footage of Harris’s Delta State University team playing its first national final championship game against the Catholic Immaculata University three-time champs whose superfans were nuns.

Sadly, Harris passed in January of this year and won’t see if the film about her illustrious, record-shattering career will win the highest achievement in cinema.

Up for best documentary short at the Oscars on March 27, with Harris’s winning record, Proudfoot and company have the “Queen of Basketball” on their side.

The Queen of Basketball is currently available on streaming platforms.

Recommendations for your next virtual viewing party

Becoming an X-Wing pilot: The first time LucasArts invited you to join the Rebel Alliance