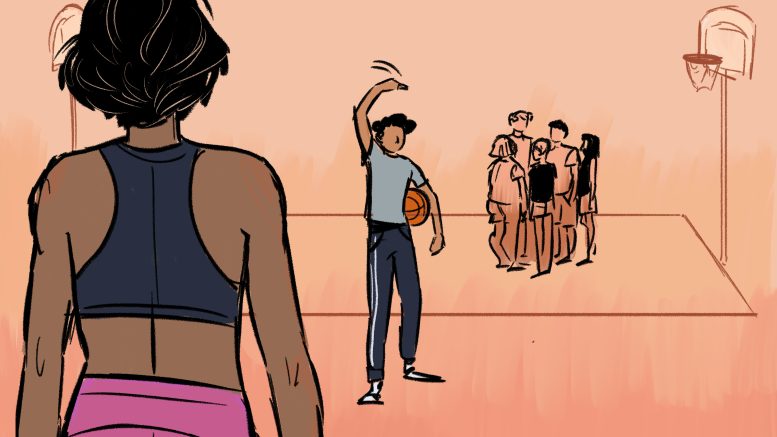 The U of M co-sponsored two presentations held Jan. 28 that included notable Black, Indigenous and people of colour (BIPOC) guest speakers who broke down the challenges young Canadians face in sport, their own personal experiences with oppressive systems and the different tactics they employ to make sport a safe place for all Canadians.

Speaking in the first event was former Canadian national ice dancing team member and current Figure Skating Diversity and Inclusion Alliance (FSDIA) advocacy chair Asher Hill.  As part of the FSDIA, Hill champions representation in the sport of figure skating and advocates for increased access to sport for new Canadians.

“Our goals are just to create a solid sense of community for skaters of colour […] different gender identities as well as as sexual orientations and religious minorities,” said Hill.

“We’re really focused right now on BIPOC representation in the sports. We want to obviously make the space safer, more inclusive and create equity as well as creating more of a sense of community with our skaters.”

The last two years have been nothing short of a whirlwind for the 30-year-old. After Skate Canada released a statement in solidarity with the Black Lives Matter movement in June 2020, Hill was publicly critical of the sport’s national governing body for harbouring a culture that was racist, misogynistic and homophobic. Hill cited his own personal experiences with racism in the sport and Skate Canada’s poor response to his complaints.

Hill continues to be an advocate for representation in skating. Hill has been vocal on CBC programs like Battle of the Blades and That Figure Skating Show, a program he co-hosts. With more and more people of different backgrounds entering the sport, Hill knows for racialized athletes, voices that can understand their experiences are crucial in cultivating safe spaces. He believes more BIPOC skating, coaching and representation in the media is a positive for the sport.

“When we see someone who looks like us achieving at something, it just makes it a little bit more tangible and possible,” said Hill.

“There is a feeling of maybe safety and camaraderie […] if we look at any sport like basketball or football or track or anything like that, of course there’s accessibility to these sports, which makes it easier […] But it’s the representation that, ‘Oh, we have amazing Black athletes now’ […] ‘Oh, I can now do that, too.’”

The first event — “Being a Voice for Change in the Skating Community: A Virtual Conversation with Asher Hill” — saw Hill share his personal stories and traumas over Zoom. Hill explained the anti-racism programs the FSDIA is implementing, strategies for dealing with covert racism andhow to identify microaggressions specific to figure skating. Hill also called for better regulations and inclusionary policies for transgender skaters, something he feels the International Skating Union has fallen short of.

The issues BIPOC minors in Winnipeg face, how to increase accessibility to sport in the city and how to properly address racism in real time dominated the discourse. Inclusivity was also a main theme, with the importance of Black LGBTTQ* representation highlighted by Asagwara, Manitoba’s first queer Black person and gender non-conforming MLA.

These meetings served as an example of what may be to come for the U of M with Tina Chen as the new executive lead of equity, diversity and inclusion.

An already accomplished researcher, Chen has been entrusted by the U of M administration to tackle the systemic inequities within the university. After reviewing the final report from the president’s task force on equity, diversity and inclusion (EDI), Chen acknowledged the intersectionality that exists within the U of M. She said the work she will be doing will consider the needs and concerns of a variety of demographics.

“The EDI task force really […]  provided the evidence of what we already knew, there is […] systematic oppressions along all lines, they’re interlocked,” said Chen.

“For me, it’s about understanding, supporting and legitimating the actions that are already being done, where people feel like they haven’t quite had the institutional support […] So opening those spaces, but also thinking about how […] we ensure that what different groups [or] individuals are doing, advocating and need around lines of anti-racism, equity, diversity, inclusion [and] access, that they’re not only done from the perspective of one slice of the world and so that they’re not actually creating new inequities in other places.”

On top of working in the U of M’s department of history, Chen is also a figure skating coach and has worked with Skate Canada and the FSDIA. Her experience in both sport and academics has influenced her research — she is currently exploring the history of racism and different oppressive systems that exist within athletics.

Chen’s work in both skating and with the rest of the community leaders bodes well for the foundation of knowledge she may be able to access when assisting Bison Athletics. In working with the athletic department, Chen expressed hope to continue to support initiatives already established and listen to athletes and their concerns. She stated she does not intend to overhaul the system, but rather to support the actions already undertaken and improve in areas as needed.

“Sara Ahmed, who’s a feminist scholar and does a lot of work on diversity work, she refers to people who do diversity working in institutions as ‘institutional plumbers,’” said Chen.

“What you really have to do is figure [out] where the blockages are, and then you need to remove those blockages so people can do the work.”

“My hope is […] that this is going to also empower people to tell me and reach out to [tell] me where those blockages are […] saying […] this is where we’re having difficulties, because I think it’s really knowing the blockages as well that’s going to help create more sustainable and better programs.”