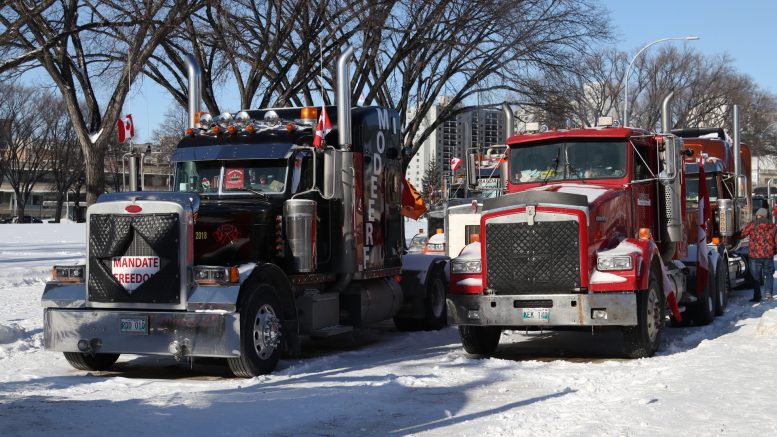 Ottawa declared a state of emergency Feb. 6 in response to the convoy of truckers with white supremacist ties currently occupying the city in protest of COVID-19-related restrictions and vaccine mandates.

The convoy has spurred imitation protests across country, including in Winnipeg, where organizers say they are preparing for a long occupation of the provincial legislature grounds.

While fundraisers initially presented the protest’s goal as ending the vaccine mandate for truckers introduced last month, the movement’s demands have grown to include calls for the end of all pandemic restrictions, the removal of Prime Minister Justin Trudeau and the dissolution of Parliament by the Governor General.

However, removing the prime minister or dissolving Parliament would not end provincial restrictions, which have been imposed mostly by conservative governments. Additionally, the U.S. has also imposed similar mandates which Canada has no authority to reverse.

The Canadian Trucking Alliance has condemned the convoy, arguing the vast majority of truckers are vaccinated.

The convoy has caused chaos in Ottawa, Ont., with some participants harassing a homeless shelter with demands for free food and allegedly assaulting one of its clients, desecrating the Tomb of the Unknown Soldier, vandalizing a statue of Terry Fox and throwing rocks at ambulances.

Businesses in Ottawa were planning to reopen Jan. 31 but have been forced to stay closed during the convoy’s protest.

Police have announced those attempting to assist the demonstrators with gas would be arrested and since Saturday have given out more than 450 tickets.

A GoFundMe for the convoy has been suspended for violating the website’s terms of service.

“GoFundMe supports peaceful protests and we believe that was the intention of the Freedom Convoy 2022 fundraiser when it was first created,” read a statement released by GoFundMe. “We now have evidence from law enforcement that the previously peaceful demonstration has become an occupation, with police reports of violence and other unlawful activity.”

Parliament has voted to order representatives of GoFundMe to appear before Parliament to answer questions about their screening process for hate groups.

A number of the convoy’s organizers have a history of expressing white supremacist views.

Video has surfaced of King espousing racist conspiracy theories. In one clip, he says “there’s an endgame, it’s called depopulation of the Caucasian race, or the Anglo-Saxon. And that’s what the goal is, is to depopulate the Anglo-Saxon race because they are the ones with the strongest bloodlines.”

B.J. Dichter — one of two convoy organizers listed on the GoFundMe page along with Tamara Lich — can be seen in a video speaking at a People’s Party of Canada rally in 2019 saying the Liberal party is “infested with Islamists.” He also refused to condemn Confederate flags at the rally and claimed Nazi swastikas were a “false flag operation” by the federal government.

When CBC reporter Dale Manucdoc tried to contact a Toronto, Ont. media contact for the convoy for an interview, the person responded by calling Manucdoc a “slave blooded traitor” and said “traitors will swing in time.”

Multiple Confederate flags and Nazi swastikas have been spotted at the rallies and a local hate crime hotline has received over 200 calls.

Kawser Ahmed — a University of Winnipeg adjunct professor of political science who researches extremist groups — said such groups “quickly saw an opportunity to utilize this movement for their benefit.”

“Due to the vaccine mandate, a lot of freedom of movement has been restricted […] so, naturally, many people are frustrated,” he said. “[T]he fundamental idea of [right-wing] extremist groups is anti-government.”

“Both in the U.S. and in Canada […] this kind of anti-government, anti-liberal idea is the […] driving factor of these extreme right groups.”

Police say the protest is receiving a significant amount of U.S. funding and participation.

“[These groups] want to mimic the violence and the hate […] that we often see in the U.S. in Canada as well, and that is why they have picked up this moment of protest,” said Ahmed.

Ahmed said people “oversimplify” when they argue that these extremists are just a few “bad apples.”

“We all understand by now, after nearly [two] years of pandemic restrictions and before that [with] the wave of extreme right and white supremacist movements in North America and Europe, that these bad apples […] tend to find expression in the media and our civil society sectors,” he said.

“It really undermines the actual issue and threat and vulnerability that these groups use and […] exploit from us […] People might undermine by saying ‘Okay, [it’s only] one Confederate flag or two hate symbols and three […] scuffles,’ but that all matters. We have [rarely] seen these groups coming up publicly and trying to draw legitimacy. This gains momentum and it’s exactly what happened around a hundred years back in Germany.”

Nunavut Senator Dennis Patterson left the Conservative caucus on Friday over its support for the convoy.

Ahmed said “it is not a secret” that groups involved with the protest hold bigoted views.

“You can get into any social media platforms that these groups use and you can find their narratives [and] ideologies there,” he said.

“So, if any political parties and leaders [know] these groups’ agenda [and] still associate with them […] I do think it is possibly their responsibility to explain to their constituencies and their followers why they do so.”