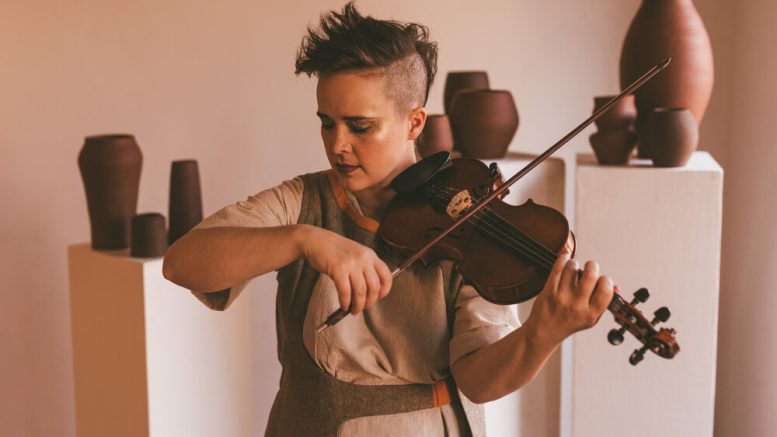 Photo provided by What's the Story?

Music has been always been a part of Raine Hamilton’s life. They began violin at a young age and were inspired by an early appearance by Yo-Yo Ma on Sesame Street to make music their lifelong pursuit.

“My parents met in a rock and roll band in Winnipeg in the ’70s,” Hamilton said.

“I grew up with the soundtrack of my dad honing songs and perfecting his songwriting all the time.”

This eventually led them to study medieval musicology at the University of Manitoba. Since graduating, Hamilton has blended their love of chamber music with folk to create music that is warm, heartfelt and ethereal — a genre known as chamber folk.

“It is, I think, just a really true representation of myself, musically,” Hamilton said.

“I have the songwriting tradition that I learned from my family, I have this chamber music tradition that started with Sesame Street and ended with a music degree, and those sounds just really belong in me, you know — I find belonging there.”

Hamilton’s first two albums, Past Your Past and Night Sky, allowed them to hone their skills in this unique genre. Their latest album Brave Land will be released later this week.

“Now that I have three albums, it’s really interesting for me to look back and see kind of the trajectory of it, and I totally see artistic growth,” Hamilton said.

Hamilton was inspired to write Brave Land while touring and completing creative residencies in mountainous landscapes.

“A large span of time that I spent in the mountains was at the Banff Centre on creative residency […] I can really learn from those mountains there, and things that showed up for me was like, how courageous that land felt to me,” Hamilton said.

“This is land moving from the realm of the land, into the realm of the sky, and so many things about that strike me, one is that that is a courageous thing […] and the worlds that it connects are so beautiful because it’s connecting this earthly world and what feels to me like a different realm of existing, like the earthly and the ethereal, the earthly and spiritual.

“That reflects a lot of how I experience my life and my body, that I am an earthbound spirit […] Here are these mountains showing me you can connect two worlds, showing me reach, showing me courage.”

Brave Land possesses this courage, speaking straight from the heart and drawing emotions as large and strong as the mountains Hamilton was inspired by. The concept album stands as a testament not only to the genre, but also to Hamilton’s performance and composition skills, knowledge of music theory and history, unique perspectives on landscape, music, art and those who create it.

Regarding their writing process, Hamilton stated Brave Land is their most intentional album yet.

“With the earlier work, it was more like the album emerged […] and then with this one it’s more like I could see the space that it would occupy,” they said.

Two songs illustrate this best: “Mountain Henge” is built off a two-line phrase common to early music and written in what’s known as the Dorian mode, and the song “Dominae Sanctae” is written entirely in Latin.

“The harmonic tools that existed [in the medieval and Renaissance periods] are different than  what people figured out and chose and use now, or used in later periods of classical music,” Hamilton said.

“Most of the music that we hear in dominant culture in North America is with this one set of rules, but there’s a whole history that led to the emergence of those rules, and so they are not the only rules. That was really eye-opening for me, and I guess ear-opening for me, to really be steeped in other sets of rules, and that informs a lot of my harmonic choices.”

“We’ve been collaborators for a good while now,” said Hamilton.

“I really value this long-term collaboration, because it lets us get deep, deep into the woods of the thing […] I think it’s safe for me to speak for everyone that we found [Brave Land] a really creatively satisfying experience, and [were] just able to get more complex, more experimental.”

Hamilton’s personal favourite track on Brave Land is “Over the Mountain,” which they wrote about being at the Banff Centre and the relationship between art and artist.

“There must just be, you know, the spirit of art, or a muse, or something really gathered [t]here, and that’s what’s described in that song. We hear these different works of art finding their artists, finding their maker and choosing them,” Hamilton said.

“A lot of times, that’s what art process feels like to me — I can feel it when I am gifted something.”

Mother of all ‘Tongues’