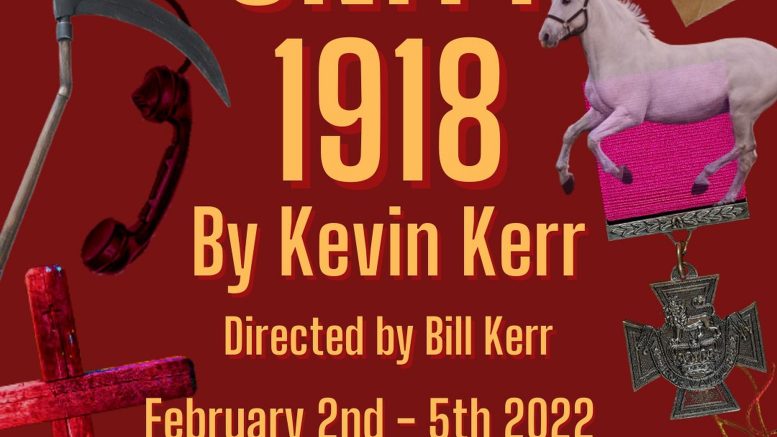 Image provided by the University of Manitoba Theatre Program

The University of Manitoba’s theatre program is preparing for its first mainstage show of the season, Unity (1918). Written by Canadian playwright Kevin Kerr, the play takes place in the titular town in rural Saskatchewan just as World War I is drawing to a close. Things take a turn for the worse when a mysterious and deadly plague sweeps through town. Part gothic romance and part pandemic horror story, Unity (1918) “will offer an opportunity to reflect and to connect.” The show will be livestreamed at 7:30 p.m. nightly over Zoom. Admission is free.

The production is directed by Bill Kerr, an associate professor in the department of English, theatre, film and media, who believes that the relatable subject matter will strike a chord with audience members more than ever before.

“The play has a particular resonance right now as the people of the town try to deal with what is beyond anyone’s control,” he said.

“There is masking and distancing and isolation and compassion and humour and a longing to connect. There are conspiracy theories and public health rules and a community struggling for life and connection.”

Much like last year’s online production of Zoom Lens by Debbie Patterson, all aspects of Unity (1918)‘s production took place virtually, including rehearsals and auditions.

“Rehearsals have been conducted over Zoom, which has been complicated,” said Kerr.

“On the one hand, the technical difficulties of bad connections, cameras and [microphones] have been an issue. On the other hand, it has also been a constant adaptation of methods between mediums […] One of the main differences has been the difficulty of forming an ensemble, all the bonding that happens in a space that is beyond the text and beyond the details of rehearsal.”

Beyond these challenges, the process has also faced obstacles such as shipping materials to a number of different spaces and attempting to replicate in-person stage directions when the actors are not physically present in the same place. However, there was no hurdle more difficult to overcome than the recent faculty strike.

As a result of the labour action, Unity (1918) had to be postponed from December to February, which meant extra work on the part of the cast and crew to make up for lost rehearsal time and space. Kerr, thankfully, was granted special permission to still connect with the cast in order to wrap up the staging of certain scenes and the production successfully pivoted in a number of ways.

“We were planning to stage the whole play streaming from individual rooms in the Gail Asper Performing Arts Hall,” he said, “including a big, masked dance scene in the Conklin Theatre, which would have been much easier to support technically, but we have now moved to each actor streaming from their own homes.”

These changes go to show the resilience of the arts community and the lengths they are willing to go to keep up the craft during these trying times.

When asked about UM Theatre’s future programming, Kerr said, “We are planning one more large production, a mainstage of Tom Stoppard’s Arcadia directed by Margaret Groome near the end of term, and two more [Lunch B.H.A.G.G. productions] directed by students.”

The U of M theatre program’s production of Kevin Kerr’s Unity (1918) is free to view and will run digitally from Feb. 2 to 5. For more information, visit the program’s social media channels.

Romanticizing your career is a dead end

Business booming for Degrees and the Hub