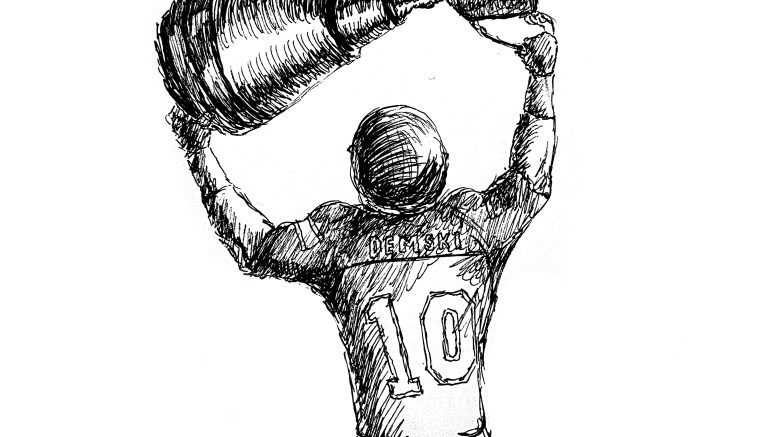 On Dec. 12, the Winnipeg Blue Bombers captured its second consecutive Grey Cup championship, defeating the Hamilton Tiger-Cats 33-25 in overtime. Former Bison football player Nic Demski scored a crucial touchdown in the fourth quarter, helping the Blue Bomber slotback win his first ever Grey Cup’s Most Valuable Canadian award. The Winnipeg native sat down to discuss his recent achievements as well as his journey to the Grey Cup.

Q: OK, first question, how does it feel to go back-to-back in the Grey Cup?

A: It’s definitely a feeling that, you know, that words can’t even describe. You know, obviously to win the first one in 2019 after such a long drought was an incredible feeling, but then to come back with almost the same group of guys and go into Hamilton’s house and win the Grey Cup […] it was almost like a fairy tale type of story. I’m just happy to be a part of it, happy to be with such a great group of guys, and everybody just committed to getting that back-to-back.

Q: Which championship [victory was your favourite,] 2019 or this year?

A: Obviously 2019, I mean that was the first Grey Cup, so I probably have to say that is my favourite, but at the end of the day […] the type of story that we created, you know, even with such a good regular season that we had this past year and then to go into Hamilton’s house and win the Grey Cup like that, I mean […] it’s tough to top that one, but 2019 was my first Grey Cup so I’ll go with that one as my favourite.

Q: The 2020 season was obviously [cancelled] due to the pandemic, how did you and your teammates spend the year preparing for this season?

A: Obviously […] no football, everybody has families, everybody has bills to pay. At the end of the day we all realize that life still goes on but at the back of our heads and everything like that […] we’re contacting each other, and some of us I’m sure were still having our minds in the football-type attitude. One thing that I did to keep my mindset always at flow is I coached Recruit Ready in the offseason. So, […] coaching was a way that I could still be around competition and still keep my mindset in the football world, so that was a little technique that I used this past offseason.

Q: This year’s squad featured many faces from the 2019 team. You guys had the best record, and you guys cleaned up at the CFL awards. Can you just describe how special this group has been [the past few years]?

A: I don’t know if you saw, but I got pretty emotional when we won the Grey Cup, and then also when I got announced as Most Outstanding Canadian […] The reason why I got emotional wasn’t about winning the Grey Cup, it was more about just knowing that we had such a special group, and […] it’s going to be really hard for all of us to come back next year […] so, I mean, probably not a thought I should have been thinking at that moment, but that’s kind of where it came from […] you know, that this group is just special and we all have a lot of respect for each other and treat each other like family. That’s why we’re so good on the field, because we’re so close off the field.

Q: You [were named] Most Valuable Canadian [at the Grey Cup]. I think the touchdown [you scored late] in the game was really impactful [to] you winning that award. You’re down 22-10 in the fourth, what is going through your head? Do you think you’re still in it? Were you confident that you guys would come back? What are you thinking?

A: I’ve always got to give a hats off to our defence because our defence shuts teams down in the fourth quarter. With the opportunities that our defence was giving us and […] our special teams game was clicking that game as well […] in my head there’s always a chance to win this game […] We’re down at halftime, we’re all looking around at each other and there’s no panic in anybody’s face. Everybody knew what we had to go out there and do. So, I mean, third quarter was a little rough […] but in the fourth quarter when we when we had our wind to the back and the type of defence that we had, I definitely felt like we had opportunities to come back and win.

of you and Andrew Harris celebrating the 2019 Grey Cup win together. What is it like to be two Winnipeg guys showing up for the city and bringing it home?

A: Yeah, that’s kind of another feeling that’s so hard to even explain […] but that was one of the first conversations that Andrew and I had when I signed to Winnipeg, which was how much it would mean to the city, and […] let’s give it everything that we got. When we won it in 2019 […] as you said, there’s a picture of us celebrating and skipping around. When we did it this past year just to go back-to-back, I mean him and I didn’t even know what to say to each other. It was just such a surreal moment and feeling, and it just feels great to be able to do this for the hometown.

Q: During your Grade 12 year at Oak Park [high school you guys won the Winnipeg High School Football League championship]. Oak Park is still one of the best places for high school football players to go. What is it like to see that school continue to produce elite football players like yourself?

A: You know, I go back to Oak Park here and there and help even coach their team and just go back and kind of show my face around the school. I had three siblings, two siblings in that school now, one of them just graduated, so I still have close connections to Oak Park. To see them still grinding it out over there and having their JV and varsity programs playing good football […] just says a lot about the program and where I come from as well. I know they have a lot of good talent coming up through there […] and I know that they have a good varsity team as well, so it will be exciting to see what they can do this year.

Q: [Statistically] you are one of the all-time best offensive Bisons football players in the program’s history. How did your time in university help you have success on the pro stage?

A: I give kudos to the U of M Bisons as well for just kind of using my skillset in different ways. The versatility […] playing running back, receiver, kick returning, that definitely gave me a lot of confidence to do either one of those at the next level. Manitoba [Bisons] did a good job using my skillset and just kind of letting me be me and play with athleticism. That’s probably the biggest thing that I could take away. It definitely gave me confidence to be a versatile player at the next level.

Q: Off the field you have begun your professional career. If [you could,] just touch on that and what you’ve got going on.

A: I do a lot of coaching, but I’m also doing financial advising as well. That was one thing that I kind of picked up during the pandemic. When the season was shut down, I decided to go ahead and get certified doing financial advising, so I’m working with Canada Life doing that on the side. So, in the offseason I grinded that and during season, you know, I come back to play some football.

Q: Having already accomplished so much in your career, what do you see as being the next challenge for yourself?

A: I don’t know man, honestly. Obviously going back and getting a third [Grey Cup] would be ideal […] but really, it’s [about] just being consistent out there. Being more of a consistent player, being somebody that this team could depend on to make big plays for them and just help my team go out there and win another Grey Cup.