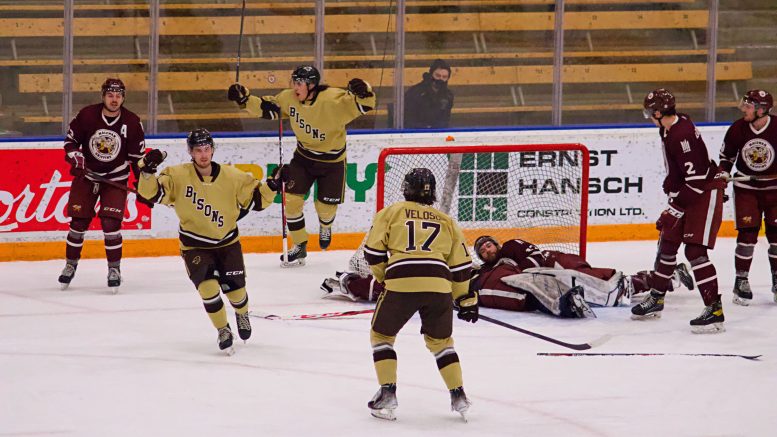 The University of Manitoba Bisons men’s hockey team played a two-game series against the MacEwan University Griffins this weekend. The herd was dominant over the weekend, winning Friday’s game 4-2 and Saturday’s 5-2.

In game one of the weekend, the Griffins got off to a quick start. After a Bisons chance in front, MacEwan would quickly transition up ice. On the ensuing rush, Chase Thudium hammered home a one-timer to put the Griffins up 1-0.

With less than a minute left in the period, MacEwan forward Loeden Schaufler would pick up his own rebound on the side of the net and wrap it around to make it 2-0.

After some back-and-forth play in the second, the Bisons struck. On the power play, Reece Harsch fired a slapshot blocker side past Griffins goaltender Ty Taylor to make it 2-1. Only seconds later the Bisons would even the score. Off the ensuing faceoff, Geordie Keane slid the puck toBison forward Noah Basarab who roofed it to tie the score at two.

In the third, the Bisons would take over. On the power play, Linden McCorrister tipped in a pass from Brett Davis to give the Bisons the lead. A few minutes later, Chase Hartje sniped a shot short side to make the score 4-2. After having puck possession for much of the game, the Griffins ran out of gas — the team mustered only one shot in the final frame, handing the Bisons its fourth win of the season.

Basarab’s game-tying goal was the first of his U Sports career. The first-year forward was thrilled to finally score at the collegiate level.

“It feels good to get the monkey off the back,” said Basarab.

After getting off to a slow start, Basarab’s goal appeared to swing the game’s momentum in the Bisons favour, allowing the U of M to play more offensively in the third. Basarab knows that each game is crucial heading into the latter half of the season. He knows that if the herd hopes to continue to have success, they must continue to execute.

“I mean, once we started playing our way I think it started going our way,” said Basarab.

“Every weekend from here on out is going to be a big weekend for us. We’ve got to keep playing our way and hopefully things go our way.”

However, after killing a MacEwan power play, the Bisons were down by one after Griffins forward Zach Webb notched his second goal of the season to make it 2-1.

In the second, Keane would tie it up for the Bisons at two, with Basarab and Bison captain Keaton Jameson assisting on the goal.

The beginning of the third was evenly contested, as both teams battled for the next goal. After playing end-to-end action for the first half of the period, the Bisons blew the game open.

On the power play, Jameson would find linemate Devon Skoleski in the slot, where he would wire a shot past Taylor to give the herd the lead. A few minutes later, Jameson made a similar pass to Basarab, who sniped it top blocker for his second of the game and third of the weekend. With less than three minutes left in the game, Skoleski would get his second power-play goal of the game, adding a cherry on top to a convincing 5-2 Bison victory.

With the win, the Bisons sit only two points back from the sixth-place Mount Royal University Cougars and four points from the fifth-place University of Regina Cougars. After losing eight of its first nine games to start the season, the Bisons have been on a hot streak, winning four of its last five.

Jameson had the most points over the weekend with six, followed by Basarab with four and Keane with three. Davis added two assists over the weekend, giving him 17 points on the year, good for fifth in Canada West.

The next time the Bisons play, they face the Trinity Western University Spartans Jan. 29 and 30 at Wayne Fleming Arena.