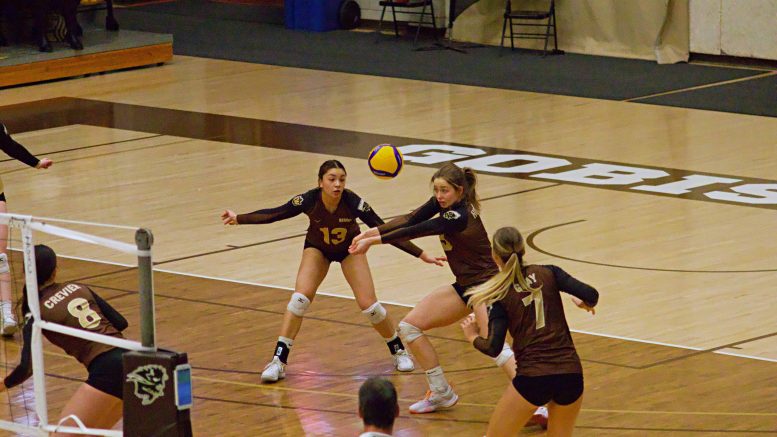 In the first set, Canada West kills leader Daniel Thiessen and teammate Nigel Nielsen got the Wesmen out to an early lead. However, the Bisons fought back to tie the set. Both teams battled to a deuce at 23. After trading leads for eight rallies, two errors on the Wesmen’s part handed the first set to the Bisons 28-26.

The second set was an even greater struggle, as each team relentlessly battled for the lead. The Wesmen’s Nielsen attempted to carry his team, making six kills in the set, while the Bisons continued to capitalize on the Wesmen’s errors. Tied at 24, Bison first-year Spencer Grahame found himself diving headfirst into the bleachers to save an errant pass. Grahame made a play on the ball and the Bisons were able to walk away with the point. Grahame’s heroics appeared to galvanize the Bisons and its supporters, helping give the Bisons the strength to come away with the set 31-29.

Appearing rattled by their 0-2 deficit, the Wesmen made 15 errors in the third. With some kills from Ben Carleton and Owen Schwartz and some quality serving, the Bisons easily walked away with the third set 25-18, giving the herd its fifth win of the Canada West season and this year’s Duckworth Challenge title.

Bison coach Arnd Ludwig was very pleased with how his team performed on Wednesday. With his team at the top of Canada West’s eastern division, Ludwig was happy to see them composed throughout the game.

“I think that we played very, very solid,” said Ludwig.

“I think the U of W made a lot more errors than we did in this game […] Also, I think my team played very, very calm even when the game got really tight. There was not a lot of roller-coaster [play.] We had a couple of phases where we made errors, like for example in the second set, I think we’re up 20-16 and then they came back, but usually teams get rattled by that, and we stayed nice and composed […] I think this is what brought us to victory.”

Grahame was also proud of how his team played. Before the start of the season, the first-year player was unaware of the Duckworth Challenge. After learning about it from teammates, he was excited to help bring home the title.

“I didn’t really know what the Duckworth Challenge was before the season started,” said Grahame.

“You know, talking to the older guys, and how big of a deal [it is] and the bragging rights for the crosstown rivals, it was super special that we had a chance to clinch it, and it was nice that our team could bring it home.”

The Bisons and Wesmen’s women’s volleyball teams faced off in the final Duckworth Challenge game on Friday. After taking the first set, the Wesmen got out to a four-point lead in the second. Thanks to some much-needed points scored by Light Uchechukwu and Andi Almonte, the Bisons were able to tie the set. As each team traded leads, the Wesmen emerged with a 25-24 lead. Nonetheless, they made two errors that gave the Bisonsback the lead, before Uchechukwu sent her second kill of the set to give the herd the set 27-25.

The third saw the Wesmen play their best volleyball of the match. Although the Bisons made numerous errors throughout the set, the Wesmen’s Kely Warmington and Ashleigh Laube were forces to be reckoned with, helping the Wesmen easily win the set 25-17.

After a disastrous third, the Bisons appeared to find its game in the fourth. Brenna Bedosky was a beast at the net, recording three kills and two blocks, while Keziah Hoeppner led with six kills in the set. Subbed with a 23-18 lead, Uchechukwu hammered home two points to help the Bisons tie the Wesmen at two sets apiece.

In the fifth, it was all Wesmen, as Ashleigh Laube and Selva Planincic led the way for the red and black. The Bisons attempted to stage a late comeback but were unable to bridge the lead, handing the Wesmen itsfourth win of the season and giving the U of W its second win of the Duckworth Challenge.

Andi Almonte was named Bison player of the match, thanks to her 12 kills and 18 digs.

After she was awarded for her performance, Keziah Hoeppner, Julia Arnold and Katreena Bentley accepted the Duckworth trophy for the University of Manitoba.