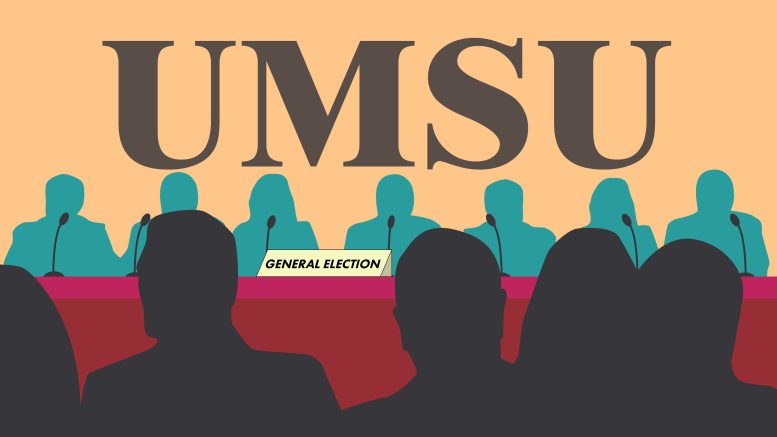 The motion, brought forward by UMSU executives, was amended to address UMFA’s non-monetary concerns, which were initially not included in the proposal.

Professors’ choice of whether to teach online or in-person and the requirement to teach three terms in a row without a break were among the non-monetary issues in the amendment.

UMSU president Brendan Scott said the student union supported UMFA in the strike, but after three weeks with no end in sight, the executives “felt it [was] necessary to support something new.”

“All other avenues [have] been exhausted and this was pretty much the final thing that both the administration and the faculty could do to end the strike.”

In a Twitter thread posted Monday night, Students Supporting UMFA (SSUMFA) said UMSU’s exclusion of governance issues from the initial draft of the motion demonstrated their “lack of commitment” to UMFA’s cause.

SSUMFA invited UMFA president Orvie Dingwall to the UMSU board meeting and they convinced the executives to include the amendments after more than two hours of debate.

Speaking on behalf of SSUMFA, Dario Duque Giraldo, a representative of UMSU’s Arts Student Body Council, said endorsing binding arbitration before governance issues are resolved would have been the “wrong decision.”

“Many of the directors of UMSU such as myself, Jaron Rykiss and Hannah Belec believe that this isn’t just a fight for the now, it’s a fight for the future as well,” he said.

“If those […] governance issues aren’t resolved […] before agreeing to binding arbitration, it’s going to basically end up being strike after strike, year after year, and we need to think about the future of the students, not just about wanting to end the strike right now, because it’s just not sustainable.”

According to SSUMFA, they were only given a two-hour notice of the motion before it was debated and voted on.

“At that point in time on Monday, we hadn’t heard from UMFA [about] what they wanted and why they didn’t directly accept binding arbitration,” explained Giraldo.

Scott disputed this characterization, however, saying, “UMFA was consulted, we knew their opinion on the matter.”

“It was on Saturday that UMSU was told that the mediator had suggested binding arbitration and we understood that it would come forward on the Sunday or the Monday, and so we booked to hopefully have the emergency meeting on the Monday,” Scott explained.

Scenarios 3 and 4 are the schedules for interrupted classes proposed by the administration, which would push the start of the winter break to Christmas Eve.

Giraldo said the executives’ endorsement of binding arbitration was “unnecessary.”

“Saying ‘UMFA and admin need to go into binding arbitration just to end the strike,’ which was basically the reason for the executives to propose this motion […] was not what needed to be done at the time,” he said.

“Obviously if both parties agree to full-on binding arbitration, it would end the strike immediately, classes would resume and everything would be great and happy, but that’s not the reality of [the situation].”