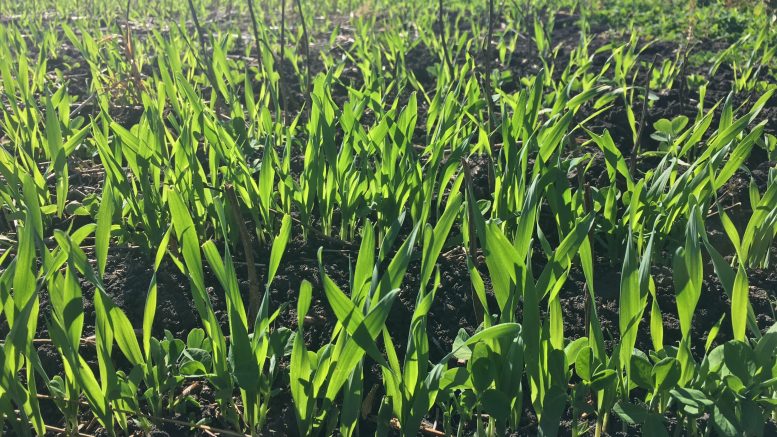 Researchers at the University of Manitoba have released a report on the use of cover crops in Manitoba, Saskatchewan and Alberta. Callum Morrison, a graduate student, and Yvonne Lawley, assistant professor in the department of plant science, surveyed 281 Prairie farms that grow cover crops to determine the benefits and challenges farms face.

“Cover crops”refers to the practice of planting for the purpose of covering the soil in vegetative life, rather than for harvesting and selling crops. As their name implies, cover crops cover the soil, unlike the typical practice of leaving soil exposed or fallowing.

The purpose of cover cropping is to provide greater protection for the soil against erosion and nutrient depletion. Planting legumes as a cover crop will also reduce the necessity of certain fertilizers, as certain types of bacteria in the soil will assist the plant in taking nitrogen from the atmosphere and fixing it into the soil.

The study surveyed farmers over the winter period from 2019 to 2020. Initially, the researchers had 211 respondents in a survey with a limited scope. Realizing that farmers wanted to share their experiences with cover crops, they expanded the survey and received responses from a total of 281 Prairie farms.

Lawley and Morrison’s survey found that, of the respondents, 81 per cent of farms have observed at least one benefit to cover cropping. The most common benefit across the survey was improved soil health, reported by 54 percent of farms.

Plants naturally use sunlight to convert carbon from the atmosphere into organic matter. However, in Canada’s comparatively short growing season, cash crops are not often left in the field long enough to maximize the carbon-fixing capacity of the sun.

“The idea with the shoulder season cover crops is you’re going to be growing something which can utilize that solar energy while it’s still nice and warm and sunny in Manitoba, put that into biomass, feed soil biology there [and]capture that carbon,” Morrison said.

“On the Prairies, we have a large proportion of people growing full season and a large portion growing shoulder seasons,” Morrison said.

Across Canada, farmers are trying to return to sustainable and natural solutions to problems exacerbated by climate change.

Morrison suggests cover cropping may be a solution to Manitoba’s drought and moisture problems. According to Morrison, cover crops should be able to catch and hold in place more snow than an empty field would. In the spring, the melt may allow farms to retain more moisture both in the plant itself and in the increased snow that stays on their land.

Although the report refers to farms that employ cover cropping as“early adopters,” the practice is not new. Solutions such as cover cropping mark a return to the ancient methods used by farmers.

“Until we had artificial fertilizers, you had to care about your rotations and the use of cover crops and [it] was one of these methods to build your soil nitrogen […] And in some ways, we’re relearning it.”

How do we fix our infamous pothole season?