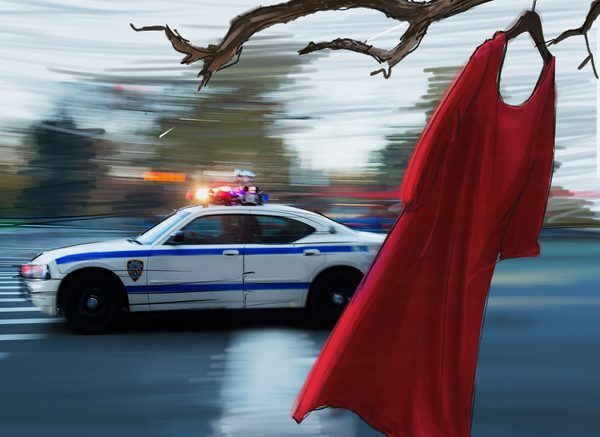 This past week, I spent time driving through the Rocky Mountains of British Columbia toward the coastal regions. In B.C., it’s common to see red dresses hanging from trees lining the highways. Although these highways evoke wanderlust for many who navigate their way through the valleys, to Indigenous people these roads are far from benign. The red dresses serve as a harrowing reminder that, for many Indigenous women, these highways were the last places some individuals were seen alive.

The notorious Highway of Tears, where serial killers and racially motivated attacks disproportionally converge, was seemingly everywhere. Police have long ignored the pattern of disappearances and murders, allowing assailants to terrorize Indigenous women and girls. However, it is hard to tell where the pattern ends. There are no borders for this issue and it doesn’t simply end at the Highway of Tears or in B.C. — it is endemic to Canada’s colonial character. Police negligence has always defined violence against Indigenous women.

Upon a short break for air, I had read that Nov. 12 marked the 50-year anniversary of Helen Betty Osborne’s horrific murder. Osborne’s story gripped the world after 16 years of silence following her murder and the four white men responsible for the crime were tried in 1987. The town conspired to keep the murder a secret to protect these men from prosecution and local police forces were complicit.

On a cold Friday night in November, Osborne began walking home from the local legion in The Pas. That same night, Lee Colgan borrowed his father’s car and picked up his friends James Houghton, Norman Manger and Dwayne Johnston. The four would continue driving around the town until they encountered Osborne walking home. They proceeded to abduct Osborne and she was later found murdered at the local pump house.

The investigation that followed lasted roughly a year and the four men were identified as suspects but were never arrested. Although the case remained open, no one was found guilty of the murder. In later years, Colgan would boast at parties and bars about murdering an Indigenous woman. In the controversial book Conspiracy of Silence, investigative journalist Lisa Priest detailed large swaths of evidence of conspiracy amidst the community. “It’s nothing we [haven’t] heard before,” said a desk clerk at a hotel in The Pas in an interview.

The case remained “dormant” until 1983 when Const. Robert Urbanoski reviewed the case and found significant evidence pointing to a few suspects. He reinterviewed those previously questioned and later took out a column in the Opasquia Times requesting witnesses to come forward with knowledge. The column resulted in incriminating evidence which motivated Colgan to take out a plea bargain for immunity. He later testified in court, providing enough evidence for convictions.

By the end of the trial, after 16 years of freedom, only Johnston was convicted of murder and sentenced to life with a chance of parole after 10 years. The jury was all white.

Although Osborne’s story is not an exception, it is one of the few openly documented instances where a white community was racially motivated to protect murderers due to the victim’s Indigenous identity. Osborne’s murder and investigation served as another example of systemic investigative negligence regarding missing and murdered Indigenous women and later influenced the Aboriginal Justice Inquiry (AJI) to “investigate, report and make recommendations to the minister of justice on the relationship between the administration of justice and aboriginal peoples of Manitoba.”

The Aboriginal Justice Implementation Commission (AJIC), which was responsible for the AJI, questioned the intentions of the RCMP following the Osborne case. “Urbanoski completed the investigation with some alacrity [which] causes us to question why the RCMP allowed the case to slip from attention at the end of 1972,” said the AJIC in the inquiry.

The reason the RCMP likely let the case slip from attention is the same reason the white community in The Pas kept the murder a secret: Osborne was Indigenous. Violence against Indigenous women does not stop with the crime — violence also materializes in the investigation. By refusing to properly look into these crimes, white, male-dominated police forces send a clear message to Indigenous communities: that police serve to protect some people and to cause irreparable damage to others.

The AJIC concluded the report by noting “Canada’s treatment of its first citizens has been an international disgrace.” Not much has changed since the report was released in 1991. Indigenous women and communities are still systemically abused by police forces. The final report on the National Inquiry into Missing and Murdered Indigenous Women and Girls was released in June 2019 and two years and an election have passed with little action. In fact, the issue was all but forgotten in this election’s leaders’ debate in Quebec.

The police force and government aren’t protecting women like Osborne. These inquiries have confirmed important information that we already knew, but what counts is the action that comes after. Bring Indigenous women and girls home. Give families closure. Treat them with the dignity they deserve. It’s the least the government could do amidst genocide.

Too loud to ignore