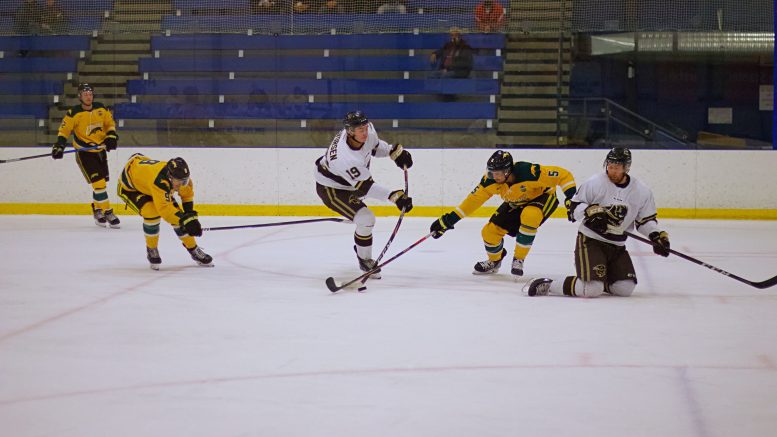 The U of M Bisons men’s hockey team has had a very tough start to the 2021-22 season. The University of Saskatchewan Huskies were in town this weekend and the herd lost both games, 4-3 in the first and 4-0 the next day.

After back-to-back losses on the weekend, the Bisons go into a bye week with a 1-5 overall record. While this isn’t the beginning to the year the Bisons were looking for, first-year forward Brett Davis is optimistic about the season.

“It has been a rough start this year for us, but the season is not even close to over,” Davis said.

“We need to stop playing other teams’ games and find our own. If we do that, we can start putting up some wins.”

Before the Bisons’ 4-0 loss on Saturday, the team lost three games in a row, all 4-3 for the opposing team. These close scores prove that the games could have gone either way.

“Bounces in hockey are a strange thing, but we haven’t got any to go our way yet,” Davis said.

“We need to keep working hard and they will come.”

Davis has been a bright spot for the Bisons this season, having scored five points in six games for the team.

“Overall I am having a good start to the year,” Davis said.

“I have five points, but points aren’t everything. I would much rather have the team win than chase personal accolades.”

The first-year forward previously played in the Western Hockey League for a full five years, splitting games between three teams. In 2017 he was drafted in the sixth round by the Dallas Stars. Although he is an NHL draft pick, Davis is excited for the opportunity he has with the Bisons.

“My first season at the university is going well. Obviously, a little more practice and some more experience will nudge me in the right direction.”

The squad now travels into a bye week before facing the University of Regina Cougars on Nov. 12 and 13.

The herd’s next home games will take place on Nov. 19 and 20 when the Mount Royal University Cougars come to face the Bisons.

While the men’s team struggled to start their season, the women’s team has been more successful.

The team’s record has improved to 5-1 after two wins on the weekend when they traveled to Saskatchewan to take on the Huskies. The first game was a thriller, as the team took a 1-0 win after Halle Edwards netted the game-winner in overtime. The second game of the two-game stretch was much the same, as Ashley Keller netted the game-winner for a 2-1 win to sweep the Huskies.

Although it was a low-scoring weekend, the Bisons came to play and improved its record for the season.

The women’s team suits up at home on Nov. 5 and 6 to take on the Cougars.