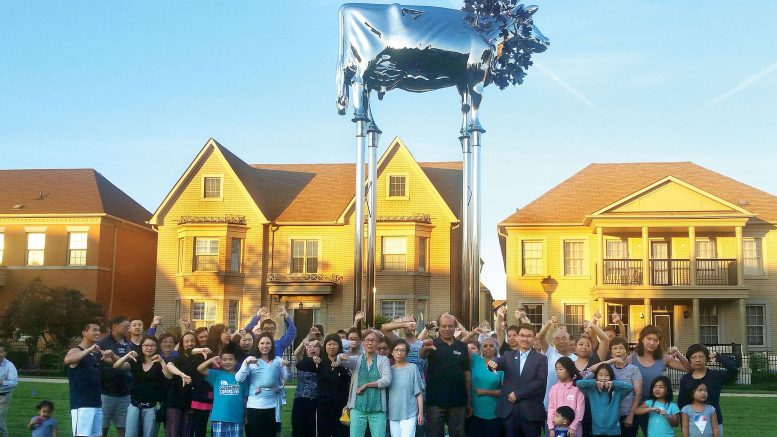 Photo provided by the National Film Board of Canada

The popular phrase “beauty is in the eye of the beholder” is perhaps the best way to summarize the events that happened between July 2017 and May 2018 in Markham, Ont.

On a July morning that fateful year, the residents of Cathedraltown — a residential neighbourhood of Markham — awoke to find a giant chrome cow on 25-foot tall stilts in the parkette that acts as a front lawn to some houses on Charity Crescent.

The public art piece, titled Charity, Perpetuation of Perfection, was donated by Helen Roman-Barber as a tribute to a decorated Holstein cow named Charity who was part-owned by her father — previous owner of the land Cathedraltown was developed on.

The stilts were integrated into the statue so that Charity could face the cathedral built by Roman-Barber’s father, Stephen Roman of Romandale Farms.

Most importantly, the neighbourhood had never been contacted about the placement or creation of the art piece.

Cue the irony of Charity as an act of charity.

The interactive digital documentary Charity, created by Canadian artists Parastoo Anoushahpour, Faraz Anoushahpour and Ryan Ferko and funded by the National Film Board of Canada, analyzes the true story of the statue erected in the Markham residential neighbourhood.

Running approximately 36 minutes in length depending on how much time is spent on the interactive features, the documentary walks viewers through the development of the statue, its placement and the neighbourhood’s fight against city council to remove it.

Charity is a unique experience that pushes the boundaries of how documentaries can be made and how artefact scan be presented to the audience.

This is particularly noticeable through the combination of audio of the neighbourhood council hearing to remove the statue with video of a real estate agent struggling to find clients to purchase a house on Charity Crescent.

The awkward moments of this experimental documentary are in its technological format — the documentary is much more interactive when played on a smartphone, but the horizontal orientation of a computer consistently shows the artifacts in their entirety.

And though understandably important in order to show how many residents would regularly see the absurd statue, the amount of windows in the homes facing the statue is a repetitive theme throughout the documentary.

Regardless of the limited interactive aspects when viewed on a computer, Charity is definitively an accomplished digital documentary experiment.

The ludicrous situation of awaking to the sight of a giant cow statue is continuously and humorously expressed throughout the documentary, complete with archival footage from CTV highlighting a windstorm that turned a steel maple leaf from the wreath around the statue’s neck into the equivalent of a ninja star.

Where Charity most succeeds is in asking questions: who gets to make public art, who gets to donate public art and who gets a say in the development and implementation of public art?

As humorous as it is educational, Charity is a worthwhile gander into the sometimes-absurd world of donated public art.

Charity is currently live at nfb.ca/interactive.