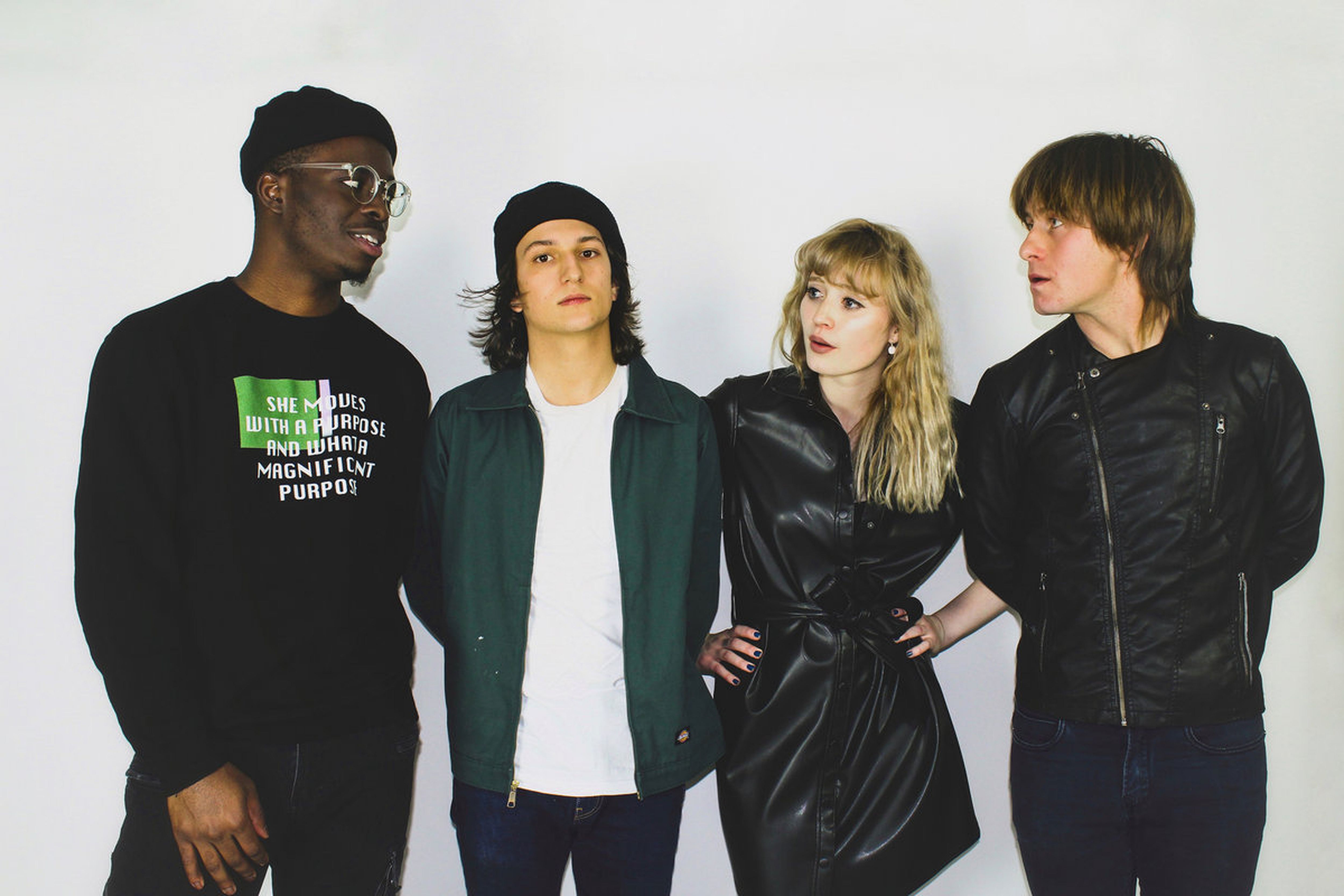 The internet was supposed to make our lives better. The reality of that naive dream is a little more complicated and a whole lot scarier, as it turns out the information superhighway might just lead to a dead end. Still, sometimes the universe chooses kindness, and the web makes good on its promise of connection and possibility. As Julien’s Daughter frontperson Emma Murphy tells it, it was the catalyst for one of Winnipeg’s most exciting new bands.

“I was just leaving high school a few years ago and I was wanting to make a band,” Murphy said. “I had switched high schools for Grade 12, so I didn’t really know anybody and I didn’t know anyone else in the scene […] so, I started making these Kijiji ads to try and connect with other musicians in Winnipeg.”

Murphy joined our Zoom call from her bedroom, while guitarist Ian Tata called in during a work lunch break, his breath visible from his parked car. Murphy continued, describing the search for the rest of Julien’s Daughter as a kind of cross-platform scavenger hunt: “I connected with [multi-instrumentalist Chelliot Osuntade] on this website called BandMix,” she said. “It’s almost like a dating app for musicians — but it’s not for dating, it’s just for connecting with other people. Then […] we found everyone else.”

“Everyone else” being Tata and drummer Cody Kennerd, who finally rounded out the quartet after a few false starts. “The band [has gone] through multiple lineups — probably five or six other people have been kind of in and out of the band, and then we finally landed on [Tata and Kennerd].”

For four complete strangers, Murphy and Tata describe a near-immediate musical chemistry — an effortless convergence of styles and ideas that lends their debut EP, The Static That Carries Over, a sense of swagger and confidence.

“We could build a song in an hour — it was crazy how we can bounce stuff off each other,” she said.

According to Tata and Murphy, the surging “Kitty Oxford” was hashed out in 20 minutes, while Osuntade penned the EP’s opener, “Coffee,” which was finished by Osuntade and Murphy in a single evening.

“Every song has kind of been built a different way,” said 19-year-old Tata. With the pandemic halting spontaneous basement writing sessions, the band has had to adapt to writing remotely. “However we can write at the moment is how we do it,” he said.

Recording a first EP in the middle of a global crisis is no small feat, complicating an already nerve-wracking experience. “I’m pretty sure that was everyone’s first experience [recording in a studio],” said Tata. “It was super fun — everyone was super easy to work with. But since we were doing a whole EP in a weekend, there was a lot of rushing and running around.”

Due to a tight budget — “we were broke,” said Tata — the band chose to record the bulk of the EP at Collector Studio rather than label HQ, House of Wonders. Murphy and Tata say they’re proud of what they made, though the sessions weren’t without hurdles.

“It would have been nice to not have to sit in a small room with a mask on in the summer — we were super angry and mad and on edge at times,” Murphy said. She describes the vocal takes as particularly anxiety-inducing, a world away from the freedom of the practice space and the stage. “I was having these meltdowns,” she said, laughing. “Ian was falling asleep while I was doing my vocal tracks and I was [feeling] like ‘You guys don’t support me! You guys weren’t listening to me!’”

All the heat and pandemic blues paid off, as The Static That Carries Over is that rare debut that wears its disparate influences proudly — the muscularity of a Josh Homme riff for Tata or the glittering bombast of Metric’s Fantasies for Murphy — while still sounding effortlessly individual. It’s likely only a taste of what’s to come, and the world of Julien’s Daughter feels full of endless possibility. As Murphy said, “This is just our first EP, you know?”

Building the arts in a borough