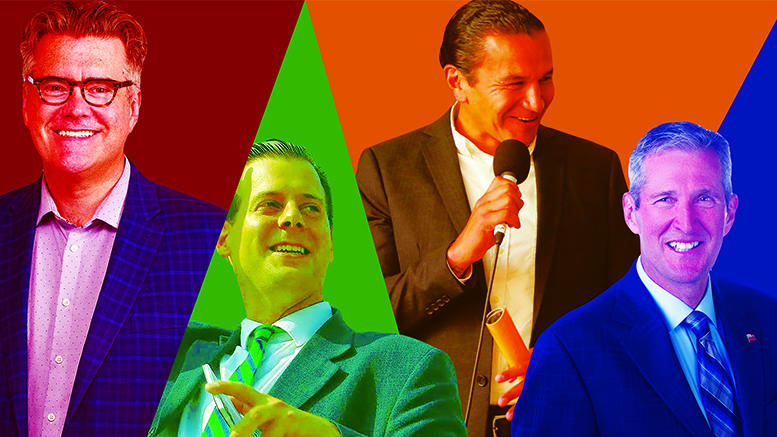 The Manitoban held a survey through social media to see what U of M students wanted to hear the party leaders discuss with us. The most popular answer was how each candidate would approach climate change.

Photo provided by the Green Party of Manitoba.

“Climate change isn’t just one heading in a platform”

Green Party leader James Beddome says he wants to make sure those who need it have access to basic income.

While the NDP and Liberals have also promised some form of basic income assistance, Beddome told the Manitoban Greens would pay for the program by removing tax credits he said are often used to benefit the wealthy.

“It’s $1.58 billion, so it’s a significant program, but it is funded, essentially, primarily by getting rid of the basic personal tax exemption and a number of other tax credits that, when you really look at them, benefit those that are making three or four times the low income cut-off line, it benefits them as much, and sometimes even more than it benefits low-income earners,” he said.

He also called concerns that a general basic income program would result in the removal of social services — and then possibly be cut by a different party in the future — “unwarranted,” saying citizens should see the program as additional to social services.

“It’s not quite high enough that we think it could dominate social services and be an effective replacement,” he said.

“So you’ll note in our proposal that [the basic income program] becomes in addition to social services, and it’s worth highlighting under repetitive PC and NDP governments going back to the Filmon days we sort of see nothing or very, very little for those living on social assistance, far less than the rate of inflation.

“And so we see our poor get poorer and get left behind, and this addresses that and in fact substantially enhances the social safety net.”

The Green Party’s platform also includes a student loan repayment plan that is based on the income of the person paying and a promise to assess at least 50 per cent of eligible assistance as non-repayable for students who need it.

Beddome added that a basic income program would benefit students who may not have time to work extensively while getting their education — which in turn, would benefit Manitoba by getting students into the workforce faster.

While the party has yet to speak on post-secondary tuition hikes, Beddome said the recent increases were “disappointing.”

“The other one I think also that was really atrocious was cutting international students off of healthcare coverage,” he said. “And those are things I think we would like to look at working on.”

Beddome referred to the Liberal party’s climate change plan as “overly optimistic in many categories” and criticized the NDP, saying they “didn’t really address climate change in the 17 years that they had,” and pointed to the NDP delaying passage of the $25 per tonne carbon tax plan in 2018.

“The entire political space that allowed the PCs to flip-flop on the carbon tax was created by the NDP, and I don’t see people pointing that out,” he said.

Beddome said what sets the Green Party’s climate plan apart from competing parties is a long history of environmental activism.

“Ultimately I think people realize that for the Greens, this has been important to us, it’s obviously the reason for the founding of the party,” he said.

“Climate change isn’t just one heading in a platform, it’s something that has to be interconnected through everything else that you do.”

Liberal Party leader Dougald Lamont believes all other party issues hinge on how we approach one — climate change.

“We can, we should talk about the other important issues, whether it’s education, or health, or jobs or justice,” he told the Manitoban. “But the fact is, none of that is going to matter very much unless we’re really putting a huge effort into dealing with climate change.”

“It should matter to post-secondary students for the same reason it should matter for every human being,” he said. “We all want to leave a better Earth to the future than we inherited.”

Lamont called the Liberal party’s plan the “most ambitious” of all the parties, which includes the goal of making Manitoba carbon neutral by 2030, meaning the province would capture at least as much carbon as it releases.

“There are a bunch of different ways to do that, some of it is just planting new forest, some of it is restoring the grassland, but these are all things that basically can absorb CO2 from the atmosphere like a sponge,” Lamont said.

“One is using technology, better fuels, and more efficient fuels, using electric for vehicles and so on, but the other is a big push on actually taking C02, taking greenhouse gases out of the atmosphere.”

Other goals include a renegotiation of the carbon tax the provincial PC government is currently engaged in a lawsuit against the federal government over, the creation of 50,000 hectares of new wilderness by 2030 and a ban on single-use plastics and Styrofoam.

The Liberal party unveiled their post-secondary plan Sept. 1. It would increase funding for the Access program by $5 million in the first year and broaden the eligibility requirements for mature and part-time students and for students who are not employed full-time.

The Access program provides financial support to post-secondary students who may face barriers when pursuing education. Funding for the program was cut by $1 million by the PC government in 2018.

“We shouldn’t be having these massive tuition increases, they should be frozen to the level of inflation, and we want to make sure that there are supports in place so that students won’t end up going too far into debt,” he said.

“We also want to make sure that institutions have the resources they need so that they’re providing the best possible education, whether it’s research or whether it’s teaching, I think that the U of M and other colleges and universities have really been neglected by a generation of PC and NDP governments who haven’t seen the value in what could be achieved at the U of M and U of W.

“Manitoba Liberals recognize education is the great leveler, and post-secondary education and research universities can be a huge engine for the economy.”

Lamont said that rolling back recent tuition increases is something the Liberals would be “willing to consider.”

“It’s something we’d be willing to take a look at, what people are paying for tuition,” he said. “There were some absolutely colossal increases that even happened under the NDP, where there were some faculties that were seeing increases of 400 per cent.”

“We want to make sure that education is accessible and affordable.”

“I would like to give post-secondary, university students a break on tuition”

While the NDP’s platform has taken a particular focus on healthcare, party leader Wab Kinew has plans for post-secondary students.

“I would like to give post-secondary, university students a break on tuition,” Kinew told the Manitoban.

Kinew said this would be accomplished by freezing the recent tuition increases — the Progressive Conservative (PC) government removed a rule set in place by the NDP that capped tuition to the rate of inflation in 2017.

“By freezing the growth of tuition to inflation, we’d also keep student loans interest-free, there’s some targeted things we want to do to help students who are coming from maybe more disadvantaged backgrounds, like reinstating the Access bursary.”

Funding to the Access program, which aims to provide financial support to post-secondary students who may face barriers when pursuing education, was cut by $1 million by the PC government in 2018, which also cut bursaries that had previously been delivered to 210 students. At the time, a provincial spokesperson said the funds would be integrated with more general bursary programs in the province.

“We want to help students access university and college, to be able to afford to stay there and be successful, but also get a good job once you’re done,” Kinew said.

Recent cuts to international student healthcare coverage are also a focus for the NDP leader.

“To date, they’ve expanded the coverage, and I think we’d work with them to make sure that they do continue to extend that healthcare coverage for international students.”

Another area where the NDP has taken a strong stance is providing solutions to climate change, an issue Kinew called “a major passion” of his, referring to his time protesting at Standing Rock as a sitting MLA.

“This is something I’m committed to because I want all of us, including our kids and the next generation, to be able to feel as tied to this land and to the waters here as we do today, so that means we’ve got to solve the climate crisis,” he said.

Kinew said as premier he would take steps needed to fulfill Manitoba’s responsibilities under the Paris Agreement, and the platform released by the NDP vows to ban fracking in Manitoba and bring an end to oil and gas subsidies.

He also said Manitoba had an opportunity to build jobs while working to fight climate change, particularly through Manitoba Hydro.

“So mobilizing tons of Manitobans to get to work and also to make our homes more efficient, and to build up the infrastructure we need to have a clean economy for generations going into the future.”

When asked what about the NDP’s policies set them apart from their fellow parties, Kinew said the NDP was the only party with the power to unseat the current premier.

“I think what sets us is apart is that we can stop Mr. Pallister.”

Photo provided by the Progressive Conservative Party of Manitoba.

The Manitoban reached out to PC leader and current premier Brian Pallister’s team in early August in hopes of obtaining an interview. After a brief correspondence, the press secretary who responded to our inquiry requested sample questions. After explaining what the discussion topics would be and informing them it was generally against our policies to provide questions, we received no further response.

The PC platform was released Sept. 3 — one week before the vote.

Here are a few things Pallister has promised while campaigning:

More cash for breweries: Pallister promised to end markups on alcoholic beverages brewed or distilled and sold on site.

More nurses: An announcement was made Monday that the premier will hire 200 new nurses over the next four years and 80 new rural paramedics.

A balanced budget by 2022: This promise is two years earlier than the Pallister’s previous estimation.

Investing in energy efficiency: The PCs will invest $25 million a year in the form of rebates for Manitobans making energy-efficient home renovations.

Conservatives to the left of me . . .