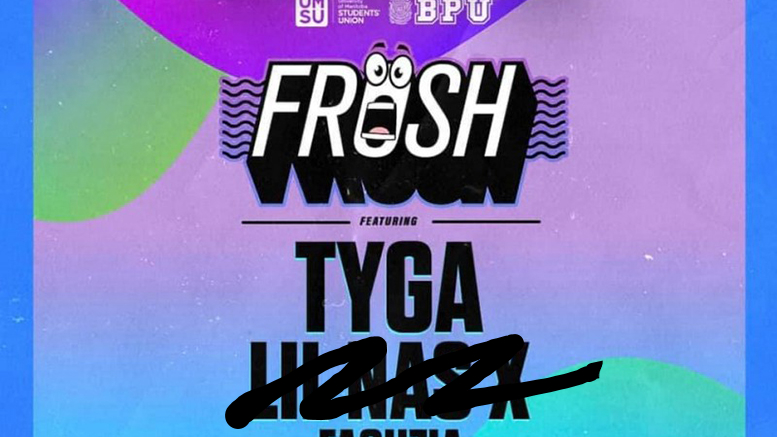 As it turns out, Lil Nas X’s “Old Town Road” does not ride through Winnipeg.

The popular rapper, known for recent hits including “Panini” and “Old Town Road” — which recently was ranked number one on Billboard’s Songs of Summer 2019 chart — pulled out of his scheduled performance at Frosh Fest this Saturday.

UMSU released a statement through the Instagram story feature, saying the situation was due to “circumstances entirely beyond [its] control.”

“We are working on his replacement to continue with an unforgettable show this Saturday that is worthy of our centennial celebration and of the incredible students on this campus,” the statement reads.

Artists Tyga, Faouzia and Myazwe are still slated to perform.

Frosh Fest has had a troubled history in recent years. In 2016, UMSU refunded $10,000 to the University 1 Student Council (U1SC) after a 2015 contract wherein U1SC agreed to pay $40,000 to UMSU to support Frosh Fest was later accused of being invalid.

While the contract was formally deemed valid, UMSU also covered U1SC’s $17,300 debt to UMSU with a zero-interest loan to be paid back over five years. It also paid out $5,000 from the UMSU endowment fund to cover the cost of U1 scholarships and either $750 in gift certificates to Degrees and the Hub or $500 in cash.

In 2017, then-UMSU vice-president external Wilfred Sam-King said the festival was financially unsuccessful and the union needed to “completely rebrand” Frosh or cancel it.

However, tickets for 2018’s Frosh Fest — which included local acts and a silent headphone dance party — completely sold out. Tickets were $20.

UMSU president Jakob Sanderson said Lil Nas X pulling out would not cost students anything this year, as, according to Sanderson, he cancelled due to another engagement.

Lil Nas X also cancelled his show at the University of British Columbia’s Welcome Back BBQ, where he was slated to perform.

What is UMSU smoking?