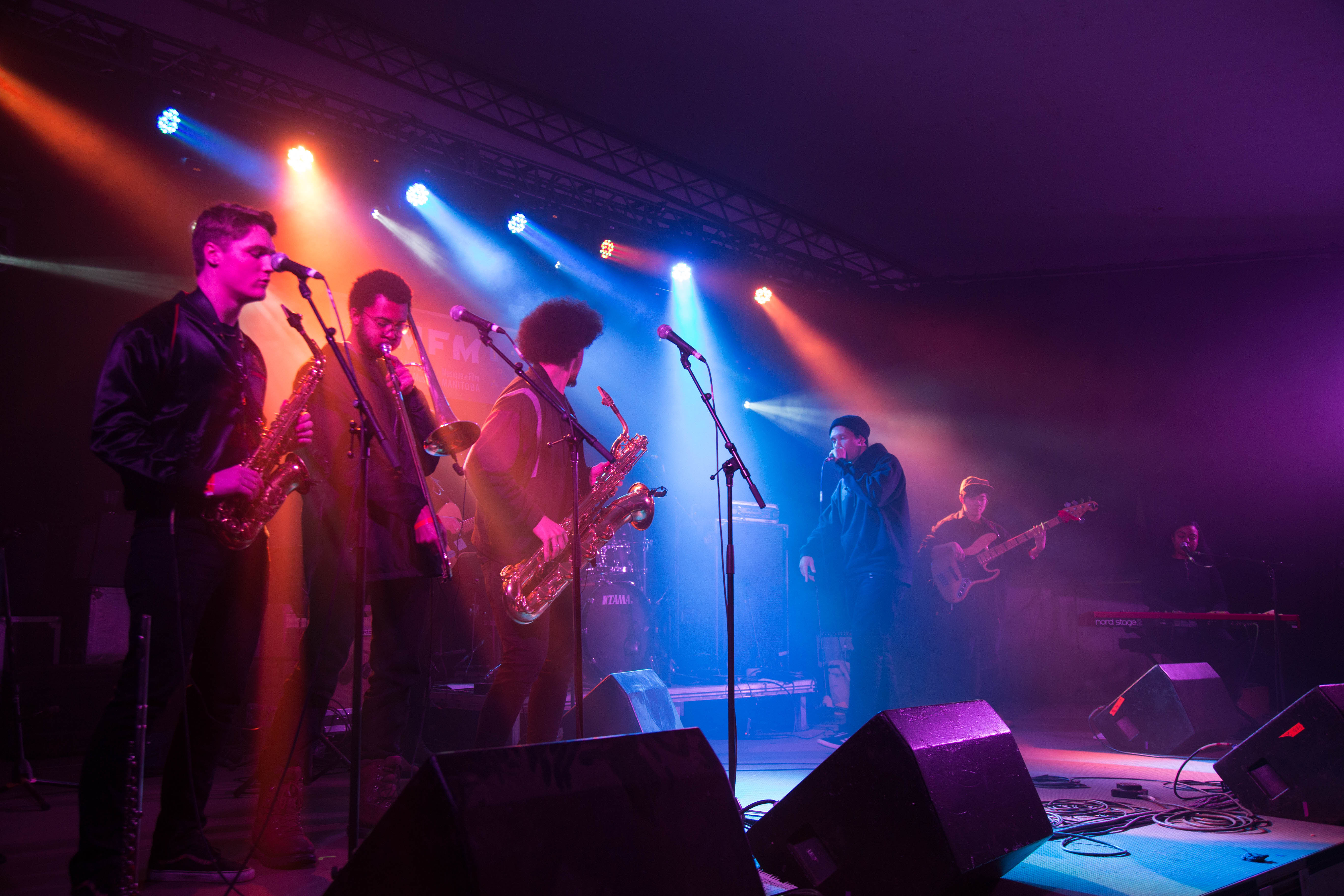 The Manitoban chatted up various performers during the 50th Festival du Voyageur (FDV). Below is an abridged version of the conversations. Kalle Mattson is a singer-songwriter from Sault Ste. Marie, Ont.

Manitoban: Did the reputation of the festival bring you here?

Kalle Mattson: I wasn’t really that aware of [FDV] before. I mean, I heard the name, but then when I sort of mentioned it to everyone, everyone was like “Oh, that’s like the biggest party in Winnipeg.”

A lot of people were saying how many people from Winnipeg that live elsewhere come back for the festival to hang out and see everyone. So, yeah, I mean it was a great time and I’m glad to be a part of it this year.

M: What do you think makes the festival unique compared to other similar events?

KM: Ottawa has a similar festival called Winterlude and we were walking through and we said, “Boy, this is a way better Winterlude.”

We spent very little time here today so it was a lot of setting up and playing. I mean the music creation looks really good, not just the fact that I’m playing it. It seems like super unique that there’s this French-Canadian community, I didn’t really realize there was one in Winnipeg, I hadn’t really thought of it before and that they celebrate their heritage in the middle of winter in freezing cold Winnipeg.

M: Is this your first time playing for FDV?

Sam Sarty: No, Living Hour played Festival I think two years ago. This is our second time playing Festival.

M: How has your experience been so far?

SS: It’s interesting cause you’re outside, so it’s like a bit noisy. People want to party too and our music is pretty sensitive, but that’s OK. You can still party and maybe listen to the music on some level.

M: Could you tell me about your latest album?

SS: Yeah, our second album is called Softer Faces and it’s technically out March 1 and we’ve been working on it for the past three years on and off.

M: How did you get involved with the Festival?

Stefanie Johnson: Well it’s the 50th anniversary and it’s one of Canada’s most amazing and best winter festivals. So, it’s a festival we’re always going to want to go to, whether we want to go to as musicians or we want to go to as people just enjoying the festival. It’s such a great festival, it’s so much fun to play at.

M: How would you say your experience was with Festival?

SJ: It was great! It was awesome. We played a nice big warm tent, there was Caribou [cocktails] going everywhere, everyone was so happy, so excited to be there, everyone in the audience is always so great because they’re just so happy, they love the festival so much, so it was really wonderful.

M: How long have you been playing for the festival and how did your band get involved in this?

Cody Goertzen: This is our first time playing at Festival du Voyageur and we lucked out. Our buddies Riley [Saunders] and Kevin [Harrison] from the Village Idiots, they organized the stage tonight at the MTS stage and they asked us to come and perform.

M: What do you think makes the festival unique?

Adam Hill: It’s the only place you can really have this good a time out in the cold and have so many lovely people come out and share some experiences together.

M: How would you describe your experience with the festival?

CG: It’s been a very energetic experience. Everybody is on their toes and excited to be here.

AH: Everything’s been next to perfect, the sound onstage and I think the sound out on the floor, we’ve been told, is just nothing but perfect.

M: Could you tell me about your music?

CG: We are an upbeat bluesy folk-rock four-piece. We got a lot of beach vibes, a lot of southern rock vibes. We’ve got an EP out, titled The Port of Lopez and upcoming we’re getting into the studio next month to record a couple singles. So, this year we’re planning on releasing two singles and a music a video to go along with that.

The band is this year’s winner of Chicane électrique, a Franco-Manitoban youth band contest.

Sam Fournier: I think they’re two very different things. The thing I like most about going to Festival is just like hanging out with friends and stuff and seeing all the cool traditional things that we celebrate every year and la tire (maple taffy). And, about performing […] like you always see people performing on the stage, so it’s cool when you’re the one who’s looking at the crowd, and you kind of know everyone’s looking at you.

Rydan Sheldon: I think my favourite part about being at Festival is the different bands you discover along the way for sure, and the type of energy with all the French people, it’s really great.

Félixe Sturk Lussier: I think the coolest thing about Festival going is probably being able to celebrate your culture, I guess. It’s not something I thought about when I was younger, but now that I’m older and I have a lot of Anglophone friends it’s nice to bring them around and show them French stuff.

Playing is super fun, cause it’s such a good atmosphere. Anomalie is a classically-trained Montreal-based keyboard player. His music falls into a growing genre that is sometimes described as electro-jazz fusion.

M: What’s your experience been like so far at FDV?

Anomalie: My first impression was that I was surprised to see that it was colder than Montreal, cause I’m used to Igloofest.

I really like the sculptures, the vibe, everyone seems to be really into it, the hé ho thing is really really cool as well.

M: Do you have a label for what you do?

A: I guess there’s this scene that’s forming of either instrumentalists or singers that are really getting into the production game in general.

The sort of hybrid thing that’s happening is pretty worldwide. I mean, there’s low-fi hip hop, I don’t know, electro-jazz or something, but, I mean, I’m pretty confident about the route that I’m building but I’m definitely not the only one that’s sort of exploring this direction. I don’t know if there’s a clear label for it, there’s definitely neo-soul that’s been around for a while, but all the electronic textures and producing that’s got into it, that’s a bit more recent. M: What do you guys think is unique about performing at Festival?

Olivier Macharia (tenor sax): A lot of people that are here we don’t normally play for.

A lot of people we’re seeing their first reaction to us, which is cool.

Brendan Grey: The French aspect, I mean, we didn’t really do too much in French this time, but in the past we have done French music. This is the place to do that.

M: What was your first performance like at Festival?

send + receive: a festival of sound