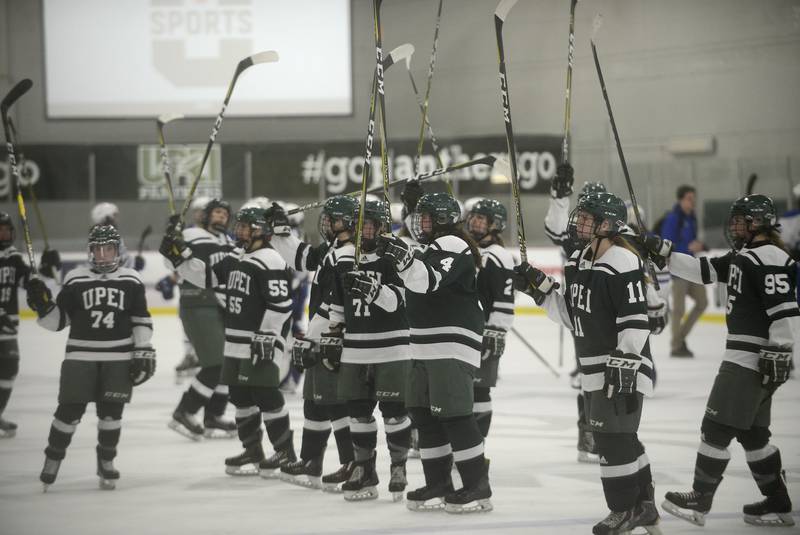 The underdog hosts for the 2019 U Sports women’s hockey national championships — the University of Prince Edward Island Panthers — showed they would not go quietly in a 3-0 loss to the University of Montreal Carabins.

P.E.I. was under siege early in the game as the Carabins fired at will in the first period. Montreal outshot the Panthers 12 to five in the opening frame — including a stretch where the Panthers went shotless — but PEI netminder Camille Scherger held the fort.

Scherger was a force for the Panthers, turning aside 24 of 27 shots she faced in the loss.

The dam finally burst in the second with a Montreal goal from Alexandra Labelle.

Jessica Cormier gained the zone for the Carabins, sending the puck toward a streaking Labelle. She got wood on it, snapping a shot by Scherger for the 1-0 Carabins lead.

Kaleigh Quennec scored an easy tap-in goal for Montreal late in the second frame and the Carabins entered the second intermission up 2-0.

Then in the third, Montreal put the game away with a goal from Alexandra Paradis.

Annie Germain carried the puck behind the Panthers goal, curled out of the corner and found Paradis at the point. She hammered the puck from the point, over the shoulder of Scherger.

From there, Montreal cruised to a 3-0 win.

You would not know this result from listening to the crowd. The Panthers faithful were out in full force, in a game sold out weeks prior to puckdrop, cheering on their club through thick and thin.

The first shot recorded by P.E.I. — taken when Montreal already had sent 10 Scherger’s way — drew a massive uproar from the crowd, sounding like a goal more than a simple shot on net.

With the win, Montreal books a date with the University of Guelph Gryphons in round two, while the Panthers will meet the U of M in the consolation round.