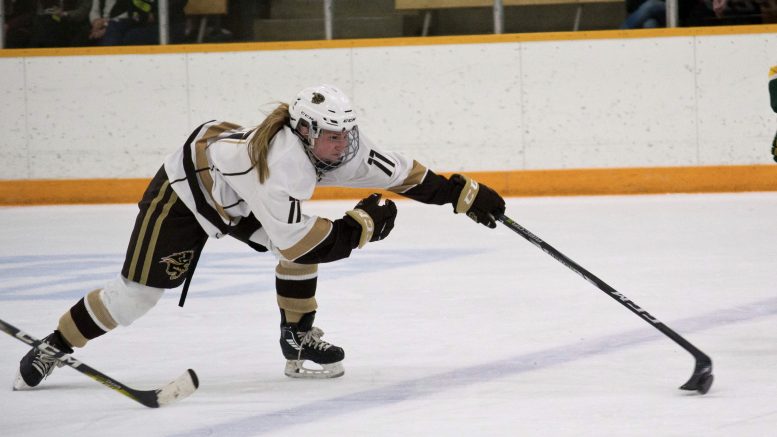 The U of M Bisons women’s hockey team only needed 20 minutes to bury the University of Regina Cougars and complete the weekend sweep. With four goals in the first period the Bisons cruised to a 7-3 win.

Sheridan Oswald continued a wicked weekend, potting two of those four first period goals. Her three goals on the weekend brought the MacGregor-born forward’s season total to eight through 20 games.

“I was struggling a bit to put the puck in the net, but once it went in it kept going,” Oswald said.

“I think it was mainly because of my linemates and the team around me that I did so good.”

Already up 1-0 off a Jordyn Zacharias goal, Oswald tipped an Alexandra Anderson point shot past Jane Kish for a 2-0 Manitoba lead.

Oswald’s quick stick was on full display minutes later to extend the lead to three. Zacharias won a faceoff draw, sent it right to Oswald and she shovelled it by Kish.

Oswald again gave her linemates the credit, saying it was “the teammates really helping out the team.”

Lauryn Keen added a goal of her own and the herd had a 4-0 lead after 20 minutes.

“It was a pretty complete first period there.”

Ireland South got Regina on the board in the second with a shot glove-side on Lauren Taraschuk, but Erin Kucheravy poked a loose puck by Kish to restore the four-goal lead a few minutes later.

Frustrations began to get the better of Regina from there. Multiple undisciplined penalties gave Manitoba a chance to widen the gap further in the third.

After Shaelyn Vallotton gave Regina some life with a goal, Manitoba scored back-to-back powerplay markers for the 7-2 lead. Regina scored another but it was not enough, as Manitoba held on for the 7-3 win.

Fisher called his team’s composure with the physicality “terrific.”

“I just want to be careful what I say so I don’t get fired or fined,” he said.

Regina had 12 of 15 penalties in the game, including multiple body checking minors and a bench minor for unsportsmanlike conduct. The Bisons went 4 for 12 on the man advantage.

The Bisons will be in Lethbridge next weekend where they will take on the University of Lethbridge Pronghorns. Game one is Jan. 25 and game two is Jan. 26, with puckdrops at 8 p.m. CST and 3 p.m. CST respectively.