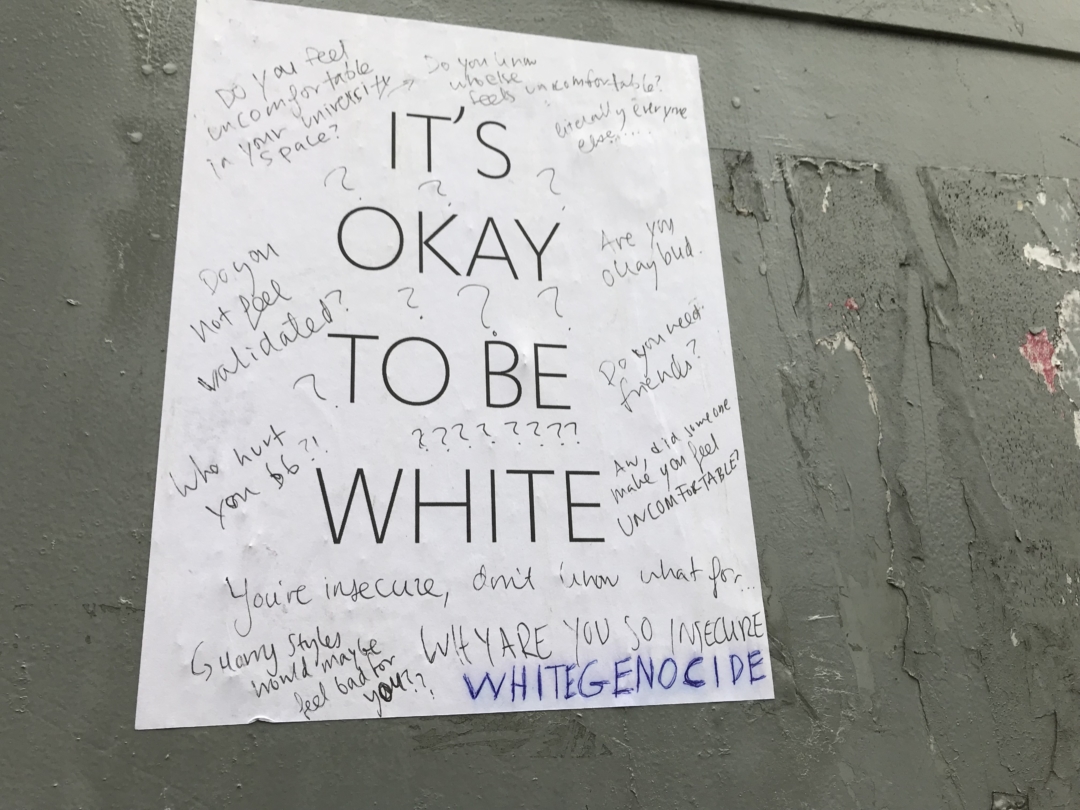 This poster was found at the University of Toronto in 2017, the same signage found on the U of M Fort Garry campus today.

Posters featuring a phrase “It’s OK to be white” were discovered on the U of M Fort Garry campus today.

The phrase, popular with white supremacist groups, was displayed on white legal sized paper and posted throughout campus. The posters were apparently placed sometime overnight on Oct. 31.

The posters were also faxed directly to the U of M’s department of native studies office, according to an UMSU release.

The statement condemns this and other acts of racism on campus.

“We are committed to an environment that is safe for all Indigenous and racialized students, and recognize that these communities have been traditionally marginalized in these spaces and continue to be today,” the statement reads.

“The rhetoric in these posters perpetuates this marginalization and UMSU calls upon all students to stand against it.”

U of M spokesperson John Danakas said the university has “no tolerance for hate and discrimination.”

“The university unequivocally condemns this and any other racist actions,” he said.

The signs appear to be part of a campaign originating on anonymous online forum 4chan.

The phrase was crafted in one of its message boards as an example of how to, as one post explains, “bait the left into revealing their hatred and racism towards white people.”

While the idea of covering post-secondary campuses and other locations with the posters originated in the U.S. in 2017, it has since migrated to Canada.

A popular Canadian far-right subreddit has featured multiple posts explaining the campaign, listing “rules” for hanging the posters — including using only the original design, placing the signs on Halloween and not otherwise vandalizing property.

There was also several posts counting down the days to Oct. 31 when the signs would be placed.

Stickers with the phrase were found near the University of Winnipeg campus in 2017.

Posters have since been reported this year in Ottawa, and a group of men in identical white masks were reportedly seen putting up the signs in downtown Halifax.