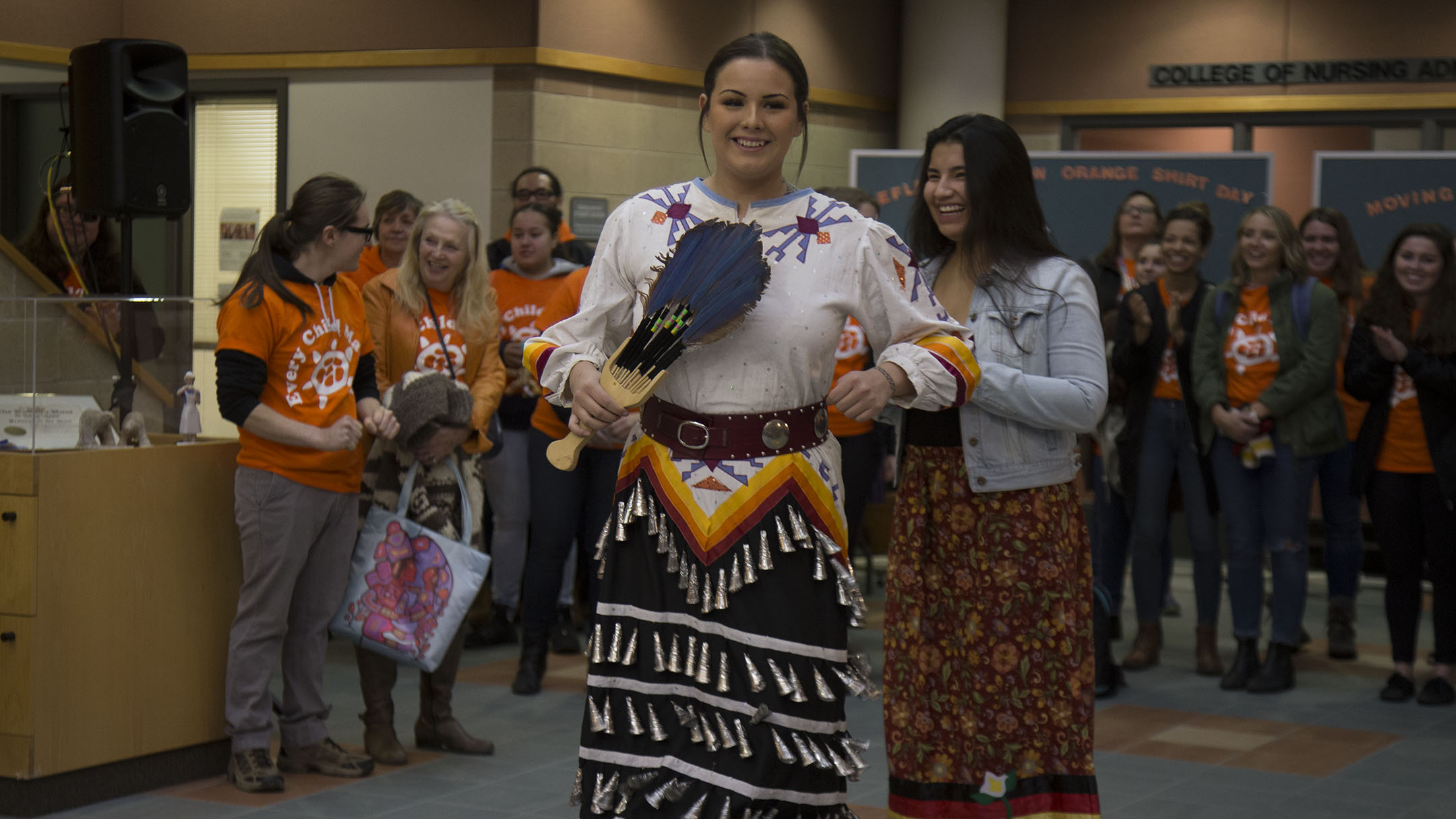 Orange Shirt Day ceremonies at the U of M included jingle dress dancing.

Students across Canada wore orange on Friday in remembrance and to honour the scores of children who attended residential schools.

Orange Shirt Day is a yearly event founded in 2013 meant to acknowledge the suffering Canada’s residential school system caused the estimated 150,000 children who attended them, and the generational trauma that ensued.

The event is named after the experiences of one of those students. Phyllis (Jack) Webstad was stripped of her clothing — including an orange shirt — while at a residential school in 1973.

The shirt became symbolic of, as Webstad said in a statement, “how my feelings didn’t matter, how no one cared and how I felt like I was worth nothing.”

While the official Orange Shirt Day is Sept. 30, at the U of M, students trekked across campus today after an opening prayer.

The walk was led by elders and residential school survivors.

After the walk, the crown gathered in the atrium of the Helen Glass Centre for Nursing. Speakers included elder Albert McLeod, who noted that while the walk outdoors was chilly, it was also a chance to remember that disenfranchised people in the city are facing the elements every day.

“So if you think it was cold this afternoon, think about our health care system, our social justice system, and realize that a man in crutches […] slept outside last night,” he said.

Netha Dyck, dean of the college of nursing, also spoke, thanking the Nursing Students’ Association for hosting the event. Dyck called the day an opportunity to hear the stories of people affected by residential schools.

Two dancers, one in jingle dress regalia, engaged the audience, pulling out several onlookers to dance with them.

Elaine McIntosh, a residential school survivor who has been invited to teach at several schools over the last week, spoke about the students she met who are newcomers to Canada.

“Seeing the little ones […] the little kids, coming from all different places around the world, and some of them can’t speak English,” McIntosh said.

“They come from different places, different languages, different cultures. And then I realize, looking at them, that we have a commonality. And it’s to have peace, and to have empathy with each other.”

McIntosh handed out a copy of a book she had read, along with a tan children’s jacket that she wore while at a residential school, which she said she kept to remember what she went through.

“Now this little person walks with me,” she said, as the jacket exchanged hands among the audience, “and reminds me, ‘Well, sometimes we fall, but you got to get back up again.’”

Healthy living for a lifetime

The 10 commandments of exam week