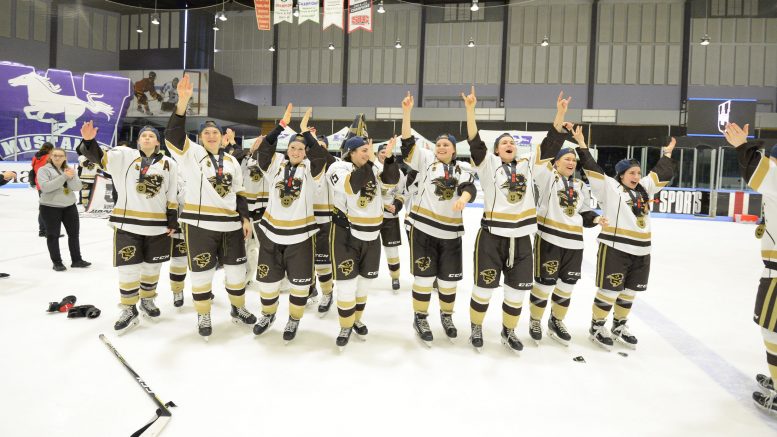 Bisons celebrate after winning the national championship on March 18 against the Western Mustangs in London, Ont.

Weeks later I was on a tiny commuter flight heading from Toronto to London, Ont., ready for the week of a lifetime. The Bisons went on to become national champions, and I was there for every single moment.

Because of this trip to a little city in Ontario, I got to understand what this life means to these players. U SPORTS is their NHL because, as one parent told me, “there is no show.”

Every moment of the tournament was documented, and someday I will be able to pull out an old and tattered copy of the Manitoban to relive one of the most important weeks of my career. The feeling of paper under my fingers and holding a physical representation of my work means far more than I could get trawling online documents.

A week of my life is collected together in ink and paper. That is something I can hold on to.

In 2013, Rogers Communications bought the broadcast rights to all U SPORTS. However, despite a brief segment on Venla Hovi  during a Friday night Sportsnet broadcast last month, there was no indication they cared.

What was once a thriving media scene has been slashed by cuts, as companies try to keep their eyes on the digital world. Now, newspapers and television stations resolve to piggy-back off those already there. They get people already paid to be there to contribute, because their sports sections cannot afford to be there themselves.

Parents of players from multiple teams lamented the fact those at home could not see their daughters compete. The high cost of streaming during ‘#ChampSZN’ on U SPORTS.live was a hindrance and drove many families to trek further than the media companies for just a few games.

Unlike the men’s tournament, which in years past has aired on national television, the women were left with U SPORTS’ own streaming service. At the very least, Bison fans could tune into UMFM, another organization that made the trip.

Walking around London you would not know the tournament was going on. A staff member I spoke with at a local hotel was surprised to learn their hotel was a U SPORTS sponsor.

The production-value of the tournament was top-notch, but I would be quicker to give the event staff at Western U niversity a pat on the back for that.

In an interview with Sporting News, American hockey star Hilary Knight bemoaned the lack of media coverage of women’s hockey,

“We’re trying to put women’s ice hockey on the map, but we’re also trying to combat the statistic of media coverage dropping in women’s sports,” she said.

Over the past two Bison seasons, this team has had an immense amount of pressure put on their shoulders. Last season showed a glimpse at what was possible, and anyone that knows the players in the Bisons dressing room knows their 3 – 2 loss in game two of the 2017 Canada West semifinals to the University of British Columbia Thunderbirds stung. That team had what it took, but the 2017-18 team had more.

When the Bisons lost their playoff opener to the University of Alberta, they did not walk around the rink dejected after the game like seasons past. They had their heads held high and spoke with confidence that the series was not over.

After seeing the Bison men’s season come crashing down in the opening round, the women’s team was determined not to subject the men’s to watching the same unfold. They walked into Wayne Fleming the next day with fire in their eyes and showed why they were the No. 1 team in the country.

The team came into the season with a championship or bust mentality, and that goal was on everyone’s tongue for the entire campaign. Every night we heard the mantra of the four boxes, of players buying in, of players believing in one another, that each and every player was doing it for the next and not themselves.

That’s the difference between a championship team and a contending team. It was once mentioned on the 31 Thoughts Podcast, hosted by well known hockey analysts Elliotte Friedman and Jeff Marek, that you can walk into a dressing room and from the way players talk, walk, and interact in a room – from the energy of the room – you know a team that will become a champion. I felt that from day one with the Bisons this season.

A tale of two sports in the sunbelt

Bears and Bisons do battle in Alberta

Bisons earn valuable split on the road in Saskatchewan