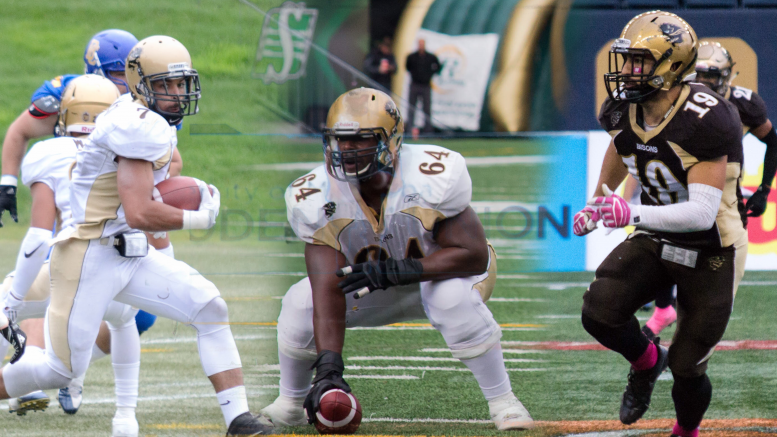 (From left) Jayden McKoy, Anthony Daley, and Tyler Fong will all be participating at the 2018 CFL Western Regional Combine on Thursday, March 22.

Six Bison football players will be looking to make an impact at the CFL Western Regional Combine Thursday.

The top performers at the regional combine will be invited to the National CFL Combine March 24-25 in Winnipeg.

“Every year Manitoba has a lot of guys going and to be selected as a part of that group this year is definitely pretty cool and it’s going to be a good time,” McKoy said.

The Bison cohort has been working out on the turf fields at the University of Manitoba, preparing for the drills at the combine such as the 40-yard dash and the broad jump.

Daley – having played his final season in brown and gold – said he is aiming to be as prepared as possible, but will focus on his personal results.

“My main focus is to just be the best I can do for myself,” he said. “You can compare yourself to other people but I’m trying to compare myself to years previous.”

Daley was last evaluated three years ago, and he said he is excited to see how he has improved.

“Things have changed. I’ve grown up,” he said. “I’ve matured in my mind and my body so I’m curious to see how I’m able to put it all together now.”

For Fong, the opportunity highlights a long, arduous journey. In May of 2015 he suffered a broken rib, punctured lung, and a broken toe after plummeting 156 feet down a waterfall. Then in 2016 he suffered season-ending an ACL injury

“Being able to overcome both those things is still a huge accomplishment for me,” he said. “All the work is getting noticed, and finally getting an opportunity where I can go out and prove myself, and hopefully enough to get noticed and be picked up by a CFL team.”

March 22-25 will be CFL Week in Winnipeg, and Fong said he will be looking to do some volunteering, while McKoy said he might take some time to relax.

“We’ve been going pretty hard for this combine so after that we’ll probably chill and get some rest,” McKoy said.

With all the scouts watching the combine, there is potential for some of these Bisons to get drafted by a CFL team down the line.

“It would be a life-changing experience,” Daley said.

“It could be something that could provide a living for you for a portion of your life, some people, their whole life. To do that as a job would be amazing.”

Washington on the defense

Derek Dufault: A call to the herd