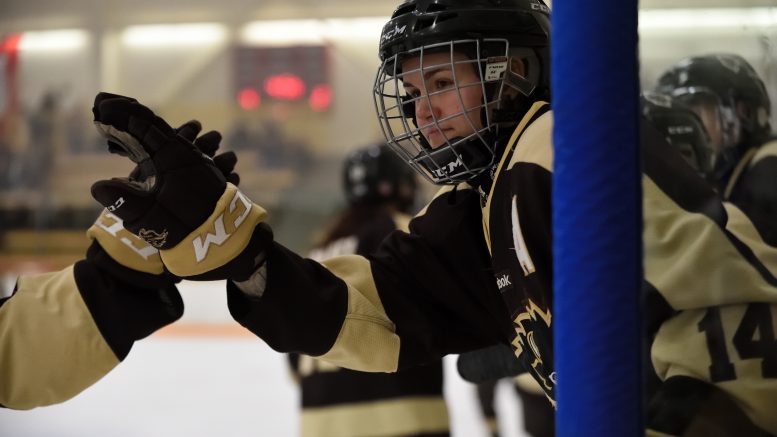 Bison fifth year forward Alana Serhan celebrates a goal in game two of the Canada West Final against the Saskatchewan Huskies on March 3 at the Wayne Fleming Arena in Winnipeg.

For graduating Bison forward Alana Serhan, going out on top will be the perfect cap on her collegiate career.

The 2017-18 hockey season has already proven to be an exciting one for the University of Manitoba Bisons. The team claimed its third Canada West Conference Championship, and will go for national glory staring March 15.

“To be able to go out on such a high like this, it really makes everything all worth it,” Serhan said. “It makes all the tears and all the sweat and everything worth it, especially after five years.”

Serhan amassed 75 points – 34 goals and 41 assists – in 137 career games, but the most important goal may have been her last. In game two of the Canada West final, she notched a vintage Serhan goal, fighting off a Huskies defender, corralling a pass, and ripping a shot low blocker.

According to Serhan, beating the Huskies for the championship in her final season was a cathartic experience.

“You know it’s kind of funny, I actually wanted to play in Saskatchewan originally,” she said.

“Steve Kook, the head coach of the Huskies, I originally reached out to him and it was an arrangement that never worked, that he wasn’t interested in working. Jon [Rempel] sometimes likes to remind me that no one in Saskatchewan wanted me as a little bit of motivation when we go into games against Saskatoon and Regina, and it felt good.”

After being passed over by her first choice, and deciding not to take her talents to the NCAA, Serhan winding up at Manitoba was equal parts luck and smart scouting by Bison head coach Rempel.

“I hadn’t even really considered the University of Manitoba in my hunt. I always imagined myself staying home in Saskatchewan or going down south, playing some Division One hockey, but weighing the options I wanted to be as close to home as possible and had a team that wanted me. Jon recruited me in Grade 11, brought me here, and it was the best decision of my life.”

Being plucked by Rempel to join a promising young Bisons squad worked out in spades for Serhan, as she has found a new home one province over.

“Yes, a lot more at home here in Manitoba,” she said with a smile. “I couldn’t imagine having been playing anywhere else for my last five years.”

The Saskatchewan-born Serhan has been a consistent presence in the Bisons lineup, missing only three games in her career. This is an impressive feat considering the style of game she plays.

“My game is kind of a gritty game,” she said.

“I’m definitely not a slickster or anything like that, just hard-working plays. I really like to lead vocally on the team as you know during games. Sometimes I find that if I can be a vocal leader, not only does it help the other players on the bench, but it can help me too.”

A well-known aspect of Serhan’s game has been her ability to pester and confuse opponents with her words, leading to her being deemed the “most frequent chirper” by her teammates.

“I would say I’m definitely the most frequent chirper,” she said.

“Again I would agree with them, probably not the best. Honestly because I can’t think of anything too quick, but sometimes when I have a couple minutes or seconds to think about it – yeah, I can get under a goalie’s skin so that’s my go to thing right now – chirping the other team’s goalie.”

As for her post-collegiate career, Serhan is not committing to anything.

“I originally thought of playing some hockey in Europe,” she said.

“That was basically a couple months ago when I wasn’t going to be satisfied with how the season has ended, but being able to end it here on a high has made me maybe put those thoughts on hold. Is hockey over for me? I don’t think so. Maybe as a player but definitely not as a coach. I want to stay involved in hockey and maybe mimic all those great experiences that coaches gave me growing up.”

Former Bison Amanda Schubert is currently plying her trade with KJT of Finland’s Women’s Liiga, and Serhan admitted to considering a possible Bisons reunion in Europe.

“She’s been bugging me to maybe think about coming down there to play with her next year,” she said. “I still have a little bit of time yet and just being able to focus on what’s at hand has taken more of my thoughts so far.”

Connor is next in line from college ranks