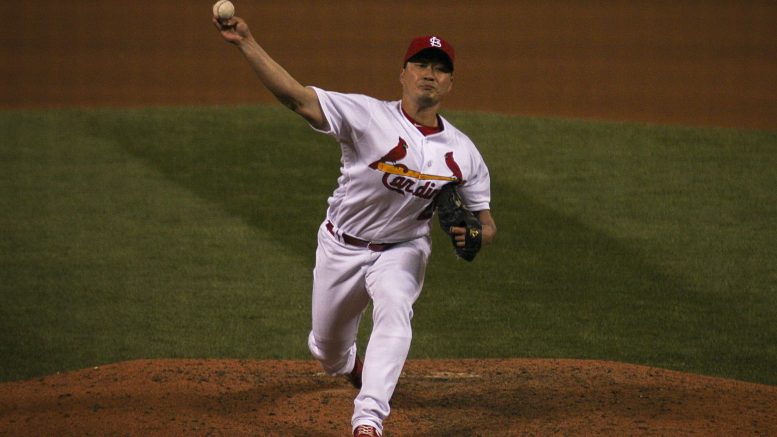 New addition to the Blue Jays bullpen Seun-hwan Oh is hoping to rebound this season. Photo from wikimedia commons.

Looking toward 2018, the Toronto Blue Jays have made a few acquisitions that may be correctly termed “patch-ups.”

While the names aren’t headline-grabbing like Giancarlo Stanton or J.D. Martinez, the players the Jays have grabbed can be considered low-risk, high reward. This is especially evident with the bolstering of the bullpen, so much so that it looks like there will even be competition just to crack the opening day roster. With the high value placed on having a formidable bullpen nowadays, this can hardly be seen as a negative outcome.

Fangraphs recently projected the Jays to finish the 2018 season with an 87-win and 75-loss record, and, according to their projections, this would be good enough for the second wild card spot. Any sensible Jays fan would take this with a grain of salt. Still, it is encouraging to think that maybe this 2018 roster has a chance.

In recent years for the Jays, it felt like the bullpen has always had the potential to be one of the best in the league, but something always falters. Injuries, inconsistency, and straight up bad luck always seem to get in the way. There are familiar faces coming back this year that we will definitely see on opening day, such as Roberto Osuna, Aaron Loup, Ryan Tepera, and Danny Barnes. Alongside these four, there are three more spots looking to be filled.

One guy who seems to be a lock for one of those spots is recent signing Seung-hwan Oh. A dominant closer during his time in Korea and Japan from 2005-2015 where he posted a 1.81 ERA and saved 357 games, he continued that dominance in his first year in the MLB as a St. Louis Cardinal. He put up a 1.92 ERA, saved 19 games, and finished with a WAR of 2.6. The following year, however, the other 29 teams understood him better. His ERA shot up to 4.10, he induced fewer groundballs, and his K/9 went from 11.64 the previous season, to 8.19.

Despite that, Oh – also known as either Stone Buddha or The Final Boss – has the makings of a strong comeback season. With the proper adjustments and the reduced pressure of not closeing games, he could be the perfect set-up man or the extra out needed to seal the deal.

Other signings may see some major league bullpen action, including Simcoe, Ont. native John Axford, and lefty Craig Breslow. Both finished their 2017 campaigns with stats less than desirable – ERAs of 6.43 and 5.09, respectively – but, like the Stone Buddha, they have experienced success before and have the potential to return to their old form should they make the right adjustments to their game.

Preparing for the inevitable

Death, taxes, and an injured Jays infield. The latter theme has been witnessed in the past couple of years, and there’s no doubt the Jays front office took notice.

One thing to especially note is it looks like second baseman Devon Travis will start having scheduled off-days to preserve his health. Thus, it would make sense to have a utility infielder to at least cover those games where Travis is not scheduled to play and, at most, given Travis’ injury history, take over second base completely.

That utility infielder would be Yangervis Solarte , who was acquired in a trade back in January . Solarte primarily played second base with the San Diego Padres last year, but is able to play all four infield positions. His stats from last year imply that he is not likely to dazzle much at the plate in 2018 – a .255 batting average, .314 on-base percentage, and a .416 slugging percentage in 2017. But one strength he seems to have is a low strikeout rate, 11.9 per cent in 2017. As well, most of his contact with the ball in 2017 was classified as either medium or hard, and with recent evidence showing that the balls used in the MLB are indeed “juiced,” perhaps that will work in his favour at the hitter-friendly Rogers Centre.

There is no doubt, unfortunately, shortstop Troy Tulowitzki is showing signs of aging. His status for an opening day start does not look good as he deals with a chronic bone spur in his heel. Slot in Aledmys Díaz. Acquired through a trade with the aforementioned St. Louis Cardinals, he was a rookie in 2016 and his stats in the first half of that season – .315/.380/.536 alongside 13 home runs and 48 RBIs – garnered All-Star status. In 2017, however, he failed to replicate the numbers he had produced during his 2016 campaign and even spent time playing triple-A ball. This may have been due to an injury he suffered late in 2016, where he took a 95-mph fastball to his hand.

Things do look better for 2018, and if all goes well, we may see flashes of his 2016 talent at the Rogers Centre. As well, he and Solarte seem to have the makings of a dynamic infield duo, as they linked up for a flashy Spring Training double play.

Whether this is a foreshadowing of what is to come for the Jays infield no one knows yet, but perhaps there can be some confidence placed in what Fangraphs has predicted for the 2018 Jays campaign.