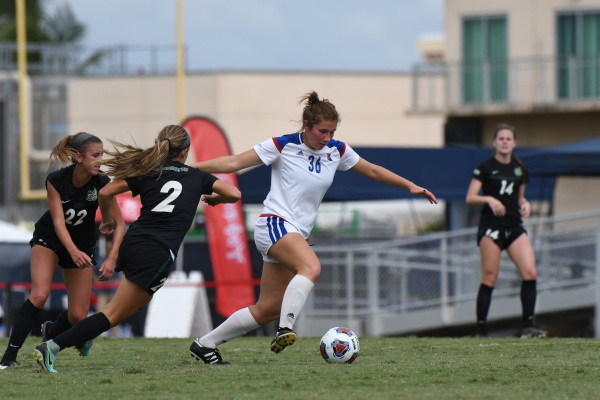 As the Johnny Cash song goes, so too has Bison soccer recruit Gabrielle Clark been everywhere, man.

After being born in Centreville, N.S., moving to Faribault, Minn. in Grade 9, then being off to Ruston, La., to play soccer at Louisiana Tech University, Clark is coming home.

Clark’s family comes from Manitoba, and both her parents attended the University of Manitoba. Her mother Nancy was named the Bison female athlete of the year in 1982, back when the U of M had a gymnastics program.

“I felt kind of homesick and wanted to come home,” Clark said. “Most of my family is from Manitoba and I also want to go to medical school in Canada after college in the U.S.”

Clark was invited out to camp last summer, enjoyed her experience, and wanted to eventually play as a Bison.

“I got to see the coaches, the players, and the facilities and I loved it, actually,” she said. “I was thinking about transferring and [Manitoba] was my first choice.”

Clark’s sister, Emma, had already committed to the Bison program, and Gabrielle is excited to get the chance to play with her sister.

“I don’t want to say it but I think she’s almost better than I am,” Clark said with a laugh. “I didn’t want to ride her coattails or anything, but she was really cool with it.”

Both of the Clark sisters went to Shattuck-St. Mary’s School and played soccer there, although Emma didn’t stick around the whole four years and currently plays for the Junior Bisons. With Emma as a centre back and Gabrielle as a defensive midfielder, Manitoba will have a strong defensive connection.

Growing up in Nova Scotia was a good experience for Clark. she played in the small community of Centreville and eventually played provincially and went to Canadian nationals, but Clark was looking beyond Nova Scotia.

“I wanted to do bigger things,” she said. “I wanted to see the world and I could do that through soccer.”

After playing at Shattuck’s St. Mary’s, Clark managed to get a full ride scholarship at Louisiana Tech and become a Lady Techster. In her first season, Clark played in 21 of 22 matches and was named to the Conference USA All-Freshman team.

When Clark first met Bison head coach Vanessa Martinez Lagunas, it was at a restaurant when she tagged along with her mom to talk about her sister. Clark said Martinez Lagunas was different from a lot of coaches she has interacted with.

“She was really personal, telling us stories and stuff,” she said. “For me that was different and cool, you can tell that she really values each one of her players whether they play or not.”

Clark said she never thought she would follow in her parents footsteps, but she is looking forward to it.

“I never thought I would go to the same university that they went to, but it’s awesome,” she said.

Martinez Lagunas said she is also looking forward to getting Clark back to Canada and in a Bison uniform.

“I think she is ready to get back into the Canadian system,” Martinez Lagunas said. “I am just so happy to welcome her, to have her family here and reunite that family at U of M.”