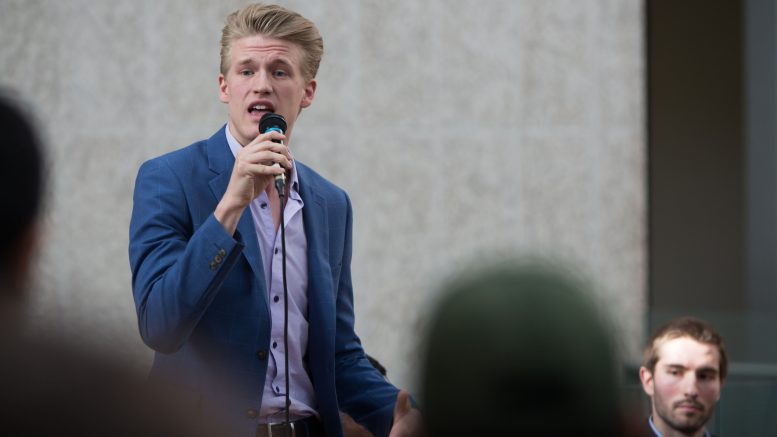 Sanderson beat out current UMSU VP finance and operations Jehan Moorthy’s Future UMSU slate and Mathew Scammell’s Two Brothers UMSU by taking slightly more than 45 per cent of ballots cast. 2,360 of the 5,616 ballots cast for president went to Sanderson. 1,518 went to Moorthy and 1,353 to Scammell. There were 385 abstentions.

Mastromonaco won with 46 per cent of the vote over Two Brothers’ Sean Scammell, 27 per cent, and Future UMSU’s Brandon Barratt, 27 per cent.

Sanderson said his team is excited and ready to share their “fresh perspective” to the union’s membership, adding that he plans on ensuring it is one that is “as present as possible to all students.”

“I am excited for all of the things we are planning to do next year,” he said.

“Our term officially starts on May 1, but I cannot wait to be talking to students and hear exactly what they want from the next UMSU executive, find out why they elected us,” Sanderson said.

VP student services-elect Mostromonaco called her team’s victory an “indescribable feeling” and said she looks forward to the transition process.

“There has to be some kind of incentive for students to actually care about what’s going on,” he said.

Scammell said that with his graduation planned for October, and his current term as UMSU councillor representing Society of Earth Science and Environmental Studies coming to an end, he will continue to advocate for a transparent and effective student union.

“One of the largest elephants in the room about our union is that nobody really participates in it,” Scammell said.

The campaign period was relatively quiet until this week when social media posts accused Future UMSU VP finance and operations candidate Wasylak of involvement in a racially-charged incident at the Hub Social Club in October.

Wasylak was among a group of five Bison men’s hockey players who were briefly banned from the Hub following an incident where two international students were allegedly attacked with racial slurs. An investigation found no proof of the slurs and the bans were later withdrawn. Moorthy commented on behalf of Wasylak and denied his involvement.

Five complaints were registered with the chief returning officer over the 12 day campaign period, all between the Elevate UMSU and Future UMSU slates. There were six complaints filed in 2017.

UMSU gets it right with political neutrality