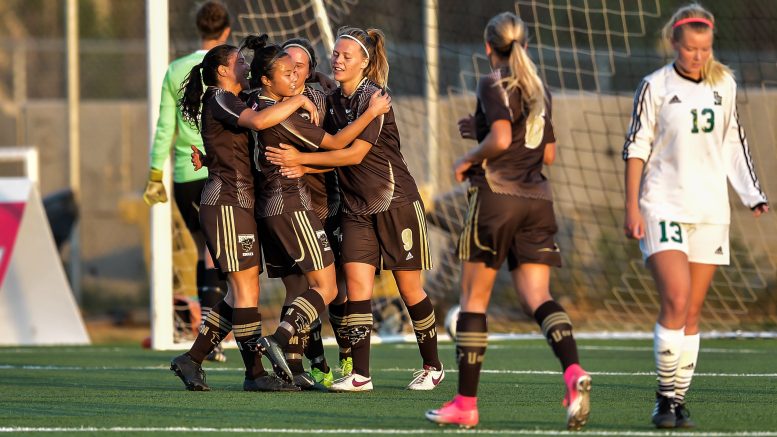 Bisons celebrate their first goal against the Saskatchewan Huskies on Sept. 10. Manitoba won 3-2.

Five months after hosting the U SPORTS  nationals, the University of Manitoba women’s soccer club is hosting another tournament this weekend.

The Bisons will be welcoming the Universities of Regina and Saskatchewan to Winnipeg for a pre-season tournament. The Junior Bison soccer team, comprised of many future varsity players, will also take part.

“Having a competitive tournament during the spring helps to keep student-athletes motivated while they train hard during the off-season and gives them the opportunity to test themselves with other U SPORTS teams towards the end of this period,” said Bison head coach Vanessa Martinez Lagunas.

The Bisons finished last season sixth in the Canada West Prairie division with a 4-7-3 record, then promptly bowed out in the first round of the Canada West playoffs with a 3-1 loss to the University of British Columbia Thunderbirds.

The tournament kicks off with the Bisons and Huskies on Friday at the Winnipeg Soccer Federation North at 5:30 p.m.

Hailey Lavarias flourishing in her second year with Manitoba