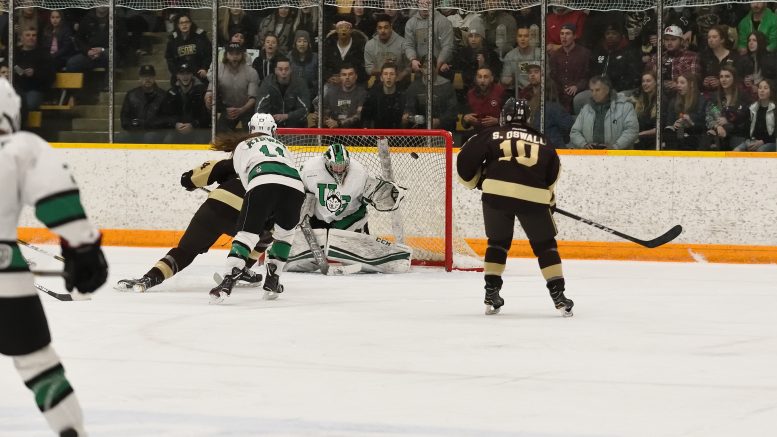 Bison forward Natasha Kostenko scores a goal while Sheridan Oswald looks on during game two of the Canada West Final at the Wayne Fleming Arena in Winnipeg.

The University of Manitoba Bison women’s hockey team’s offence was on full display Saturday, as the club charged to a 5-2 win to capture its first Canada West Championship since 2011.

The University of Saskatchewan Huskies and Bisons locked horns Saturday night with the herd looking to claim the Canada West Championship and the Huskies pushing for a game three.

Unlike the last two Bison games, the teams put points on the board in regulation. The Bisons struck first with Charity Price’s first goal of the playoffs to make it 1-0 in the second period. And then the wave started.

Alana Serhan cut through centre and took a stretch pass from Courtlyn Oswald. The Saskatchewan-born Serhan fought off a Huskies and ripped a shot low blocker on Jessica Vance for the 2-0 Bisons lead.

“It was just a sick pass,” Serhan said postgame. “[Warkentin] hit me in the middle and Jon’s [Rempel] been preaching all week about kind of slashing through their D and Warks, she kind of set one up for me.

“Luckily I got it on my stick and it was almost out of my reach, and I just pulled it back and I was thinking ‘Get it on her blocker side, her glove is her strong side’ and it went just below the blocker there, post and in.”

Five minutes later, the home side struck again. Natasha Kostenko slipped coverage in the slot, taking a pass from Sheridan Oswald and sniped her first of the postseason top corner glove-side on Vance.

Saskatchewan would not go quietly, however, as captain Kaitlin Willoughby tore into the Bisons zone on a breakaway. Her shot went top corner on Lauren Taraschuk, ending her shutout streak at 259 minutes and 30 seconds. The teams ended the second period 3-1.

Saskatchewan went on to add one more but a goal from Jordyn Zacharias and an Oswald empty netter put the game out of reach, leading the Bisons to a 5-2 win.

“I feel good,” Bison head coach Jon Rempel said postgame. “To do it at home finally with this group, having the other two on the road, it’s really special to do it at home here and it’s been a long time since we’ve had one.

“We had four boxes we wanted to check off this year and three of them are checked, first place, qualify for nationals, and win Canada West, and we’ve done all those things.”

Manitoba’s rookie netminder Taraschuk was sensational in goal, giving up no more than two goals in a game all season on the way to the championship. It was just as special for her veteran partner, graduating goaltender Rachel Dyck.

“Yeah I mean, this is everything,” Dyck said. “We worked so hard for this throughout the season, every game, overtime, whatever it took. We did it, and I’m just so proud of everyone.”

Fellow veteran and graduating captain Caitlyn Fyten was just as lost for words.

“I am so happy right now I can’t even describe it,” she said.

“I’m overwhelmed with joy right now. It feels unreal, we’ve had a strong team these last four years, to see us finally able to cap it off and all that hard work paying off it feels unreal.”

“It’s crazy, the atmosphere in here is unreal,” she said. “Our Bisons faithful is awesome.”

Next up for the Bisons is the U SPORTS National Championships on March 15-18 in London, Ont.

Herd the news about Bison hockey?