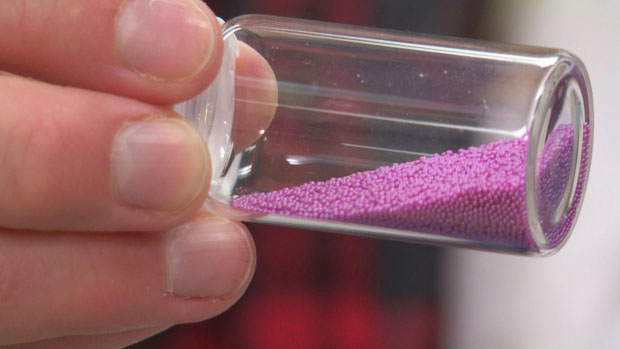 These tiny microbeads were used to compare them to the micro plastic beads found in the Red and Assiniboine rivers.

A recent study by a University of Manitoba undergraduate student suggests that Lake Winnipeg, and the fish that inhabit it, contain high levels of microplastics.

Microplastics are tiny (approximately five millimetres in diameter) bits of plastic that can be found in a myriad of places. Many inexpensive face scrubs, for example, use the plastic beads for exfoliating purposes. Microplastics can be found in clothing, toiletries, and can also be created by small pieces breaking off of plastic products.

The study, which was published in the Manitoban undergraduate journal, the Proceedings of Manitoba’s Undergraduate Science and Engineering Research (PMUSER), involved student Sarah Warrack, along with professors Mark Hanson and Michael Rennie, taking samples from bodies of water in Manitoba to search for microplastics.

PMUSER, which primarily functions as a peer-reviewed undergraduate journal, is the first STEM-focused undergraduate journal in western Canada. Warrack, who received the Best Paper Award from PMUSER for her research, noted that the journal’s for-students-by-students method provided an opportunity for students in STEM fields to gain first-hand experience in science writing.

“PMUSER offers students an opportunity to learn how the peer review process works when writing a scientific paper,” Warrack said.

“It is a very good experience for any student.”

While microplastics have yet to be proven dangerous to humans or animals – in the study, it is noted that the number of microplastics ingested did not appear to affect the fish that were examined – the sheer magnitude of manmade pollution found in Winnipeg waters speaks to a wider environmental problem.

“Typically, if microplastics are ingested, they pass through the digestive system as would any other solid material,” Warrack said.

“This isn’t an excuse to ignore the problem, rather it speaks to our general disregard at times for what we are willing to release into the environment.”

Just last month, toiletries that contain microbeads were banned from sale or import in Canada. While the ban does not go into full effect until Canada Day this year, the effect of microplastics on water here in Manitoba is staggering today – while watersheds surrounding the likes of Lakes Erie and Ontario are more densely populated, Lake Winnipeg’s surface concentration of microplastics was found to match theirs.

It is estimated that five trillion plastic particles are currently floating in our world’s oceans, or about 300,000 tonnes. The study comes at a time when microplastics are a central focus of a new research grant from the federal government – just last week, $2.7 million in funding to study several types of ocean contaminants and their effect on water-dwelling creatures was announced.

Warrack is continuing her master’s studies in the department of environment and geography, and hopes to continue studying microplastics and their behaviour.

The trials and tribulations of PMUSER

While PMUSER presently finds itself in the exciting position of having published some of the most consequential undergraduate research of the past year in its 2017 edition, this has not always been the case for the once-troubled journal.

Kyle Morris, a section editor for PMUSER, was seminal in the revitalization of the journal, which took years to come to fruition. After it was founded in 2011 by students at the University of Manitoba and the University of Winnipeg, the first volume was not released until 2013, and the second volume was not released until 2016.

“I hypothesize that the first gap was due to initial challenges of gathering resources needed to establish the journal – library support, faculty support, administrative support,” he said.

“There was a dedicated journal advisory board but not enough resources. I hypothesize the second hiatus was a result of students coming and going quickly due to the nature of a fast-paced degree program at U of M. Since there were few artifacts remaining that outlined the PMUSER vision and process, new members of the team had nothing to work with and thus the momentum was lost.”

After Morris reached out in 2015 to Ben Li, the associate dean of undergraduate studies at the faculty of science, he was put in touch with fellow student Jonathan Challis, and the pair were the sole members of PMUSER until 2017, when Matthew Doering – who also works as a copy associate at the Manitoban – was brought on as associate editor and eventually made editor-in-chief. Presently, the publication has 10 members on its editorial board – all of whom are students.

Chloé Schmidt, the current associate editor at PMUSER, noted that part of what makes the journal such a valuable resource is the hyper-accessible nature of the research it publishes.

“We publish peer-reviewed original research, reviews, et cetera, which is archived online and available open access for anyone – student, faculty, at the University of Manitoba, or anywhere in the world – to read,” she said.

“It’s an outlet for students to showcase the work they did as an undergraduate, especially if they weren’t previously considering getting it published.”

PMUSER is an example of the magnitude of the work done by undergraduate students at the University of Manitoba, and its now-rapid growth speaks to just how important accessible options to publish that work is.

“What I’ve found is that there are good students everywhere, and U of M is no exception,” Morris said.

“I feel [students] of the U of M, Winnipeg, and Manitoba, in general, should be more vocal and proud of the diverse and valuable research that is being done here.”

PMUSER is planning a relaunch event at the end of the semester, along with promoting the journal on social media.

“Of course, these are all in addition to the goals we always have,” Schmidt noted.