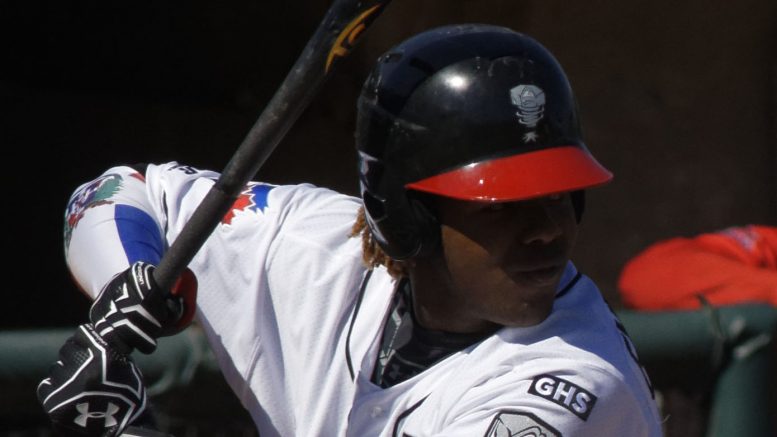 Blue Jays prospect Vladimir Guerrero Jr. with the Lansing Lugnuts in May of 2017. Photo by Joel Dinda

For the Toronto Blue Jays, the window of opportunity to capture a World Series has closed for a few years.

The result has largely been a combination of multiple factors: the inability to find an equal replacement after the departure of Edwin Encarnación, a sudden drop in production from former star and now free agent José Bautista, and the constant trip to the disabled list for Devon Travis and Aaron Sanchez – two players who fans had hoped would be integral pieces to the puzzle the Jays were hoping to solve.

With the New York Yankees seemingly set to run the AL East for at least the next three years, it seems that all is lost for now. That is a key phrase: for now.

On Jan. 27, the top 100 prospects in the MLB by MLB Pipeline were announced, with the Jays landing three in the top 100. Two of the three were in the top 15. While prospects are always a risky call no matter the sport, it seems there is something special about these players that should give the Toronto faithful something to be optimistic about and, hopefully in the future, something to cheer about.

Signed as an international prospect at the age of 16, you ought to take a chance on the son of a Hall of Famer. His father, Vladimir Guerrero, will be heading to Cooperstown as part of the Class of 2018. He had a storied career with the Montreal Expos and Los Angeles Angels, and was known as one of the premier hitters during his time in the majors. It seems as if those skills have directly been transferred to his son. Vlad Jr. was given the first ever 80-grade hit tool for his prospect report. (For baseball scouts, there are five tools for batters, one being hitting. They are graded on a scale with 50 being the average, and every 10-point deviation representing the next step in skill, or lack of.)

While only 18 years old, he seems to be the heir apparent for the third base position once that role is vacated by Josh Donaldson and any further replacements. Donaldson, at 32, signed a one-year deal for the 2018 season. It is likely he will be moved as he starts to age and leave his prime years. Whether it is a change in position or a change in scenery is still up in the air. Having a replacement like Vlad Jr. developing in the minors and already being a highly-touted prospect provides some relief for the potential uncertainty surrounding the position.

Bo is another prospect with baseball ties – his father Dante Bichette was a four-time All-Star with the Colorado Rockies. Although Dante doesn’t have as storied a career as Guerrero Sr., the offensive potential of his son is on par with Vlad Jr.’s. Bo received a 70-grade hit tool from scouts, and his showing in 2017 in the minor leagues suggests he would be a nice complement alongside Vlad Jr. should the two make it to the show.

Bo would provide additional relief surrounding uncertainties at the other positions the Jays may have problems with in the next couple of years. Shortstop Troy Tulowitzki can still show he’s got it when it comes to a defensive showing in the infield, but at the plate, things are dimming. The aforementioned Travis has shown flashes of greatness, but only when he was healthy. Both Tulowitzki and Travis were hit with the injury bug in 2017 and missed more than the half-season. An aging Tulo and an injury-ridden Travis mean the Jays have to choose where to permanently place Bo once he is ready.

Alford was drafted by the Jays in 2012, knowing full well he was committed to playing college football with Southern Mississippi. He subsequently transferred to Ole Miss. Luckily, and perhaps the smarter choice, he made the switch to pursue baseball. What might be unsettling are the trips to the disabled list he has made while in the minors, but all seems well besides that.

At 23 years old, Alford is the one readiest to make the jump to the major leagues. With scouts giving him a 70-grade tool in running, he could potentially be the speedy leadoff hitter the Jays have not seen since they traded for Ben Revere for the latter half of their 2015 campaign. With the departure of Bautista, Alford would also provide a much needed patch-up for an outfield that has mainly showcased Kevin Pillar alongside a rotation of players in left and right field.

Biologist and economist team up to talk about the environment