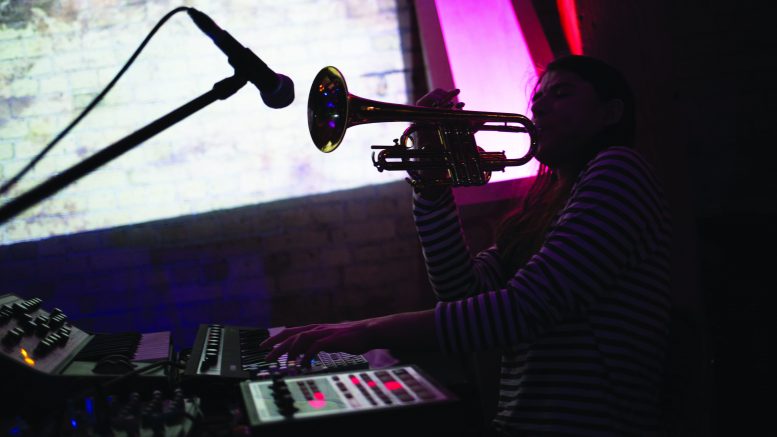 Matthew Cardinal impresses the crowd with his masterfully coordinated performance on Friday Night.

From Feb. 2 to Feb. 4, local coffee shop Forth will host experimental music performances, visual art installations, and artist workshops brought international artists such as Leslie Deere and Lisa Busby to create and perform alongside local artists including Colby Richardson and Joanne Pollock.

As visual coordinator for this year’s festival, Colby Richardson was responsible for coordinating the visual art installations at Forthwith.

“Really my job this year has been much more how I can accommodate the other artists at the festival and populate the space with some really interesting work from artists around the country,” Richardson said.

Edmonton-based band nêhiyawak performed a score they released for a film called ôtênaw, which documents the oral storytelling of teacher Dwayne Donald from Edmonton. Band member Matthew Cardinal said he thinks nêhiyawak was invited to perform at Forthwith based on that score because it is much more experimental than what they typically create.

“The normal stuff is more song-based and there’s a lot more vocals and a lot more melody, where this score work is a lot more sparse, some slightly different instrumentation, I do electric piano, we play brass instruments that we don’t normally do, and it’s a lot longer, one song is like 20 mins. A lot more of it is improvised,” he said. Nêhiyawak performs the score for the film ôtênaw at Forth on Friday night of Forthwith Festival.

“A cliché of sound art shows is a lot of people really quiet sitting on the floor listening really closely. And Forthwith does expect that, but combines the social element of music with […] listening to sound art,” Richardson said.

“It’s just trying to bring experimental audio and art installations into more of a casual kind of experience in the sense that some audio art can be so academic it may dissuade folks from experiencing it.”

Richardson had an installation at the festival called “Channelers.” The piece is a series of video sculptures in the shape of old television sets communicating with radio waves locally transmitted by Richardson. While people walk around and observe the sculptures, the visuals on each will change as the bodies interact with the radio waves.

“The idea is to utilize the analog TV and analog TV broadcasting to try and connect the living observer with the dead radio waves around them,” Richardson said.

“There’s all these radio waves that were the hallmark of advanced civilization, like TV, and now it’s all dead space. The radio waves are now completely empty, so I used those channels by sending out a local transmission to the three channels and as the body walks around them, it acts as another antenna in the room and transforms the image on the screen.”

As the second annual festival, artistic leader Wouter Jaspers said they have learned a lot since last year.

“This year we put more time into building the learning part of the programming with expanded artist workshops, the nighttime parties had bigger lineups, and we had more of a focus on the visual artists and installations,” Jaspers said.

The festival wrapped up on Sunday evening with a performance from Berlin-based experimental musician Uchi.

Inaction on Churchill rail a dereliction of responsibility