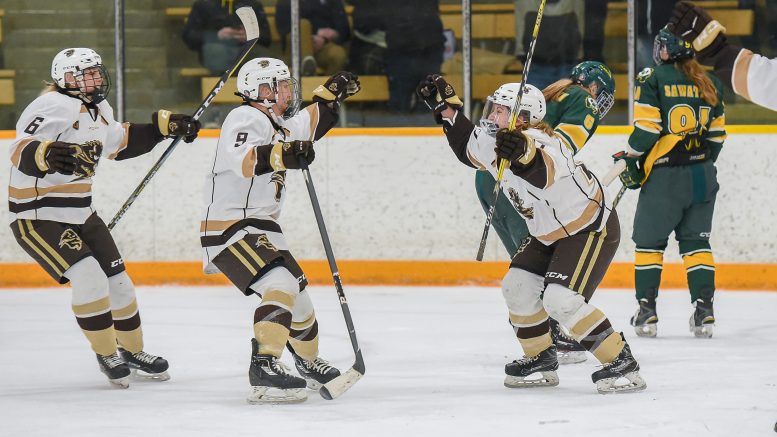 The University of Manitoba women’s hockey team has guaranteed a spot at U SPORTS Nationals after they beat the reigning national champions, the University of Alberta Pandas, in three games in the Canada West semifinals.

The Bisons will host the University of Saskatchewan in the Canada West finals on March 2-4.

The Bisons and Pandas battled in an even game Friday night until a controversial call late in the third gave the Pandas an edge to eventually take the game 4-1.

Bison forward Courtlyn Oswald set up the opening goal when she stepped out from behind the net at the 12:17 mark of the first and put a backhand on the Pandas goalie Kirsten Chamberlin. Mekaela Fisher snapped home the rebound for her first of the playoffs.

The Pandas came back a few minutes later on the powerplay, Taylor Kezama hammered a point shot through a crowd and low-glove on Rachel Dyck.

The game remained tied until the 16:42 mark of the third, when Bison defender Erica Rieder took a roughing penalty. On the powerplay, a shot from the outside was blocked and then fired short side by Amy Boucher to give Alberta a late lead.

Boucher and Regan Wright added an empty net goal each to put the game out of reach.

Manitoba and Alberta were locked in a tight game Saturday, needing overtime to pull the Bisons even in the series with a 2-1 overtime win.

Game two was the triumphant return of Venla Hovi to the Bisons lineup, fresh off her bronze medal win with Finland at the Olympic Winter Games in South Korea. Hovi had an assist and three shots in her return, which was in jeopardy until the day of the game.

“I came back [Friday night], was stuck in Vancouver first for about six hours because of a snow storm,” Hovi said.

“So I was supposed to get back earlier [Friday] but I got in pretty late. I was supposed to come skate this morning. I didn’t because I didn’t get my gear, so I was basically praying, hoping my hockey gear would get here before the game.”

With 20 seconds left in the first, Bison Sheridan Oswald picked up a pass from Lauryn Keen and went bar down on Chamberlin to open the scoring.

Manitoba’s lead was short lived after Pandas forward Alex Poznikoff came back to tie the game early in the second with a great individual effort. She broke into the Bisons zone, fought off defender Erica Rieder on her way to the net, and tucked a backhander under Lauren Taraschuk’s pad to make it 1-1.

The final frame solved nothing, and in the overtime, Bison defender Alexandra Anderson was in the right place at the right time. Anderson got the puck off the draw and picked the corner with a laser to force a decisive game three.

Less than 24 hours after their overtime thriller, the Bisons and Pandas were back on the ice for the series deciding game.

The two teams slogged through a scoreless game and into a fourth overtime before the Bisons were finally able to net the 1-0 game winner.

With six and a half minutes to go in the fourth overtime, a Bison faceoff win in the Pandas zone went to Hovi and she slid back towards the middle, drawing the defenders to block her shot. Instead the Finn sent a slap pass to Jordyn Zacharias, who tipped it in to end the second longest game in Canada West History, sending the fans at Wayne Fleming into pandemonium.

“I mean that’s in my top, probably three that I’ve been a part of at this level for sure, maybe ever. I just thought two incredibly evenly matched teams that didn’t want to give an inch.”

Bison rookie goalie Taraschuk made 31 saves in the shutout win and had yet to process the experience postgame.

“We absolutely deserve that and we’ve worked so hard and we knew what we wanted the outcome to be and we just didn’t stop until that puck went into the net and we got what we wanted.”

Rempel didn’t have much to say after the game.

“I just said ‘who wants to go to Western?’ as loud as I could,” he said with a laugh.