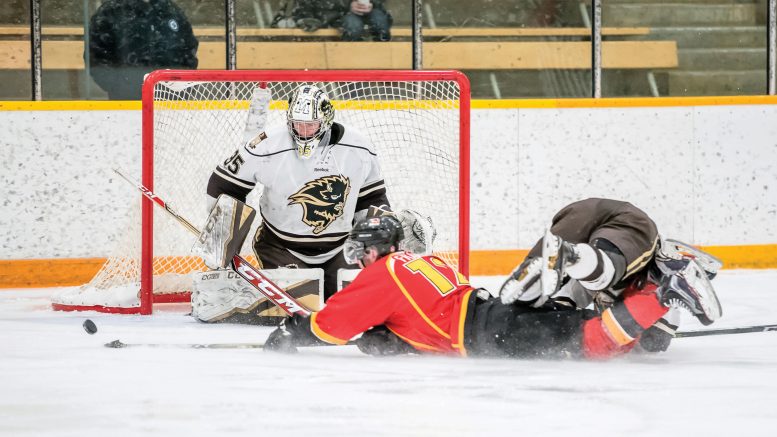 Bison goalie Byron Spriggs makes a save against Calgary.

The Bisons’ red-hot offence got cooled down in Calgary this weekend. After combining for 31 goals in their previous six games, Manitoba only managed only two in two games. The Bisons lost 5-1 on Friday night, and 4-1 on Saturday afternoon.

Warren Callis and Michael St. Croix were the only Bisons to score over the weekend. St. Croix finished the year third in Canada West scoring with 35 points (13G, 22A) in 28 games. In between the pipes, Byron Spriggs collected two more losses over the weekend, finishing the year as the busiest goalie in the west, having faced 815 shots and playing 1434:52 minutes.

Manitoba concluded the year with a 16-10-2 record with 34 points, good enough for third place. Bison head coach Mike Sirant has guided this Bison program to its 11th straight playoff appearance.

The Bisons will host the Mount Royal Cougars in a three-game series on Feb. 16-18 in the Canada West quarter-finals at the Wayne Fleming Arena.

Gazing into the (silicon) crystal ball

Beating the Buzzer in Saskatchewan

U of M Bisons drop pair at home to Regina Cougars