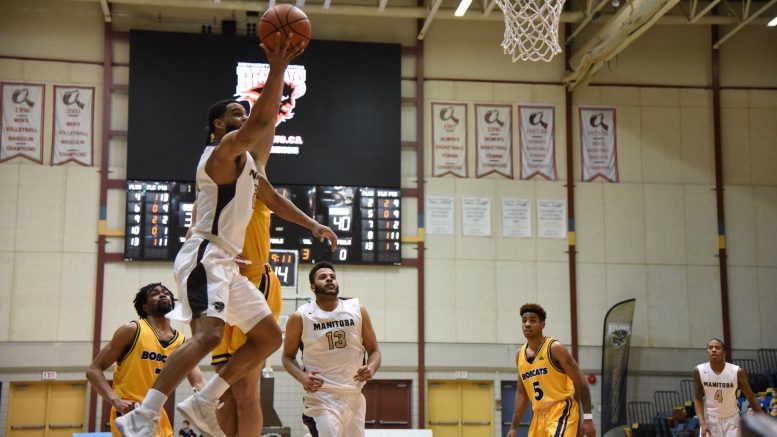 With a 82-76 win over their provincial rivals, the Bisons move on to play a three game series against the University of British Columbia Thunderbirds Feb. 15-18.

Rashawn Browne was the man for Manitoba in the first quarter, driving the offence forward with multiple jumpers and scoring 11 points. Cameron O’Hara was a beast on the glass, tallying nine points and four rebounds. He put up a double double with 13 points and 13 rebounds.

“That’s a phenomenal performance from a first year kid. He was unbelievable,” said Bison head coach Kirby Schepp. “We know we’re going to get performances from Justus [Alleyn], Rashawn, and James [Wagner, but] we need one of those other guys to step up and do something and he was the guy tonight.”

Brandon was nearly equal to the task and the score was knotted at 24 after 10 minutes.
Browne, the Canada West assist leader, went down early in the second quarter to injury, but returned a few minutes later. He made his presence felt with an incredible display of acrobatics to tip in a rebound after Alleyn missed a three-pointer.

The second quarter didn’t see much scoring, but the Bobcats pulled ahead, to lead 40-35 at the half. It was a three pronged Bobcat attack in the first half, with Jonathan Range leading the way with 11 points, and Tyvon Cooper and Pookie Saunders both pitching in nine.

Alleyn exploded to start the second half, hitting a quick three, then getting a jumper to fall. He followed that up with a hard lay up. Alleyn scored 20 points in the third quarter alone and led a 16-2 Manitoba run in the opening five minutes of the third quarter. He finished the game with 31 points, seven rebounds, and one assist.

“I came out flat in the first half. I didn’t really play my game,” Alleyn said. We “regrouped at half time and just came out really aggressive and it worked for us.”

Manitoba led 62-53 after a dominant third quarter, outscoring Brandon 27-13. Brandon crawled their way back in the fourth bring the score close. But Browne or Alleyn were there to quell the danger with a clutch jumper. Manitoba held on for the 82-76 win, securing a berth in the quarter finals against UBC.

“It’s relief really. You’re just completely focused on this game it’s done,” Schepp said. “I’ll probably have one cold beer and prep immediately for UBC and that’s about it.”

Manitoba heads out to Vancouver to play the UBC Thunderbirds in a best-of-three series in the Canada West quarter finals on Feb. 15-18.

Bisons track and field season off to great start