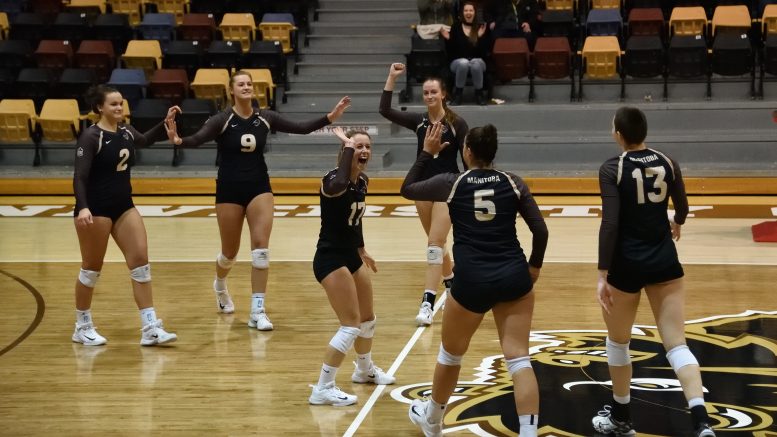 The Bison women's volleyball team celebrate after upsetting the UBC Okanagan Heat 3-1 on Feb. 17 at the Investors Group Athletic Centre in Winnipeg.

The men’s team earned a sweep over the Heat without losing a single set to end the regular season on a four-game win streak.

“The way we played the last two weeks of the season is really gratifying to see us play some of our best volleyball this time of the year,” said Bison head coach Garth Pischke after Saturday’s 3-0 win over UBC Okanagan.

“I’m excited for what the next round holds for us. We earned our way in, we did what we had to do to do it, and that’s what makes it more gratifying.”

The Bison men’s team finished the season with an 11-13 record, placing them seventh in the Canada West. Pischke’s squad did this by starting four first year players – and first year setter Jack Mandryk has played exceptionally well for Manitoba down the stretch.

“We called upon him when we didn’t expect to and he came through for us and really showed a little bit of leadership and some great setting skills for a first year kid,” Pischke said.

It was a bittersweet weekend for a pair of Bisons, as fifth year players Scott Vercaigne and Adam DeJonckheere were playing in their last home game in brown and gold colours. Vercaigne saved his best night for last, finishing with a team-best 19 kills.

“I’m feeling really good,” Vercaigne said. “We made playoffs tonight and we got a good spot, looking to travel to B.C. and we’re playing our best volleyball right now so we’re excited.”

DeJonckheere etched his name in the record books over the weekend and took sole possession of second place all-time in Canada West career conference kills with 1,394.

On the women’s side, the Bisons had to win a set against the number one ranked Heat on Saturday to secure a playoff berth. It appeared to be a daunting task, as Manitoba fell 3-1 the night prior.

They did more than just that, as the giant was slain 3-1. The Bisons lost the first set handily, but they stormed back to win three straight.

“We just hung in there and kept fighting. We just started to play better. Hey, this is a tough team to play against, the margin for error is very slim, but I’m really pleased with the level of play we rose to.”

The win marks a return to the playoffs for the Bisons, as they finished the year seventh in the Canada West with a record of 12-12.

“It feels great to get us back to where I think we should always be, which is in that upper echelon of the conference and in the country,” Bentley said. “I think we scraped and clawed our way back to that.”

A key aspect of Manitoba’s success this season was the return of former national champions Brittany Habing and Emily Erickson. The pair came back this season and officially bid their final farewell to Investors Group Athletic Centre.

Habing had a remarkable match on Saturday, the setter finished with 43 assists, 13 digs, five kills, and four blocks.

“It’s bittersweet to play the last game on this court. Obviously these years have meant a lot to me,” she said.

“I don’t think it’s really sunk in yet exactly the feeling of not ever playing here again but it was super cool the team kind of just stepped up and said ‘it’s your senior night we’re going to do this for you’ so that was really cool.”

With Manitoba’s seventh place finish, the Bisons will see the Heat again next weekend in the Canada West quarter finals, this time in Kelowna, B.C.

“We spent a week there over the winter so we kind of got to know them on a personal note and they’re a super fun team, super nice group of girls so it’s tons of fun to play them because we know it’ll be a good match no matter what.”