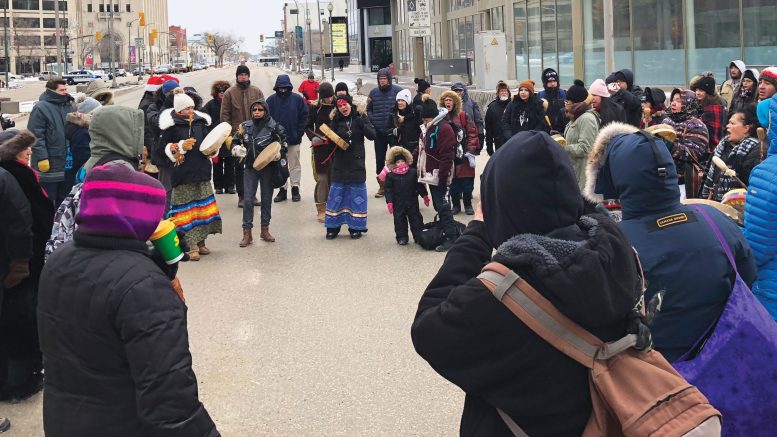 Community Members gather at Portage and Main to show support for INM.

More than 50 people gathered at Portage and Main to observe the fifth anniversary of the Idle No More (INM) movement on Dec. 23.

INM started as a protest against Bill C-45 proposed by the federal government under then-Prime Minister Stephen Harper, which critics charged would undermine Indigenous rights and environmental protections by changing land management laws on reservations.

INM gained momentum when Chief Theresa Spence of the Attawapiskat First Nation undertook a hunger strike in 2012 to draw the attention of federal government toward Indigenous issues.

Since then, INM sparked various actions across Canada and North America and became a broad movement encompassing issues including environmental degradation, Indigenous rights, honouring the treaties, Indigenous sovereignty, and economic and social inequality. Those present also held signs to protest against energy proects such as Line 3 Pipeline.

“Food insecurity, water insecurity that may not change, lack of affordable shelter, bills that put our children at risk, our children and youth staying in foster care. The list is so long.”

As stated in the vision statement, INM aims to motivate “all people to join in a peaceful revolution, to honour Indigenous sovereignty, and to protect the land and water” and shine a light on the injustices faced by Indigenous peoples in Canada.

Hickes, who is part of the movement in Winnipeg, said it is crucial for her as an Inuit woman to participate. She said she feels like a guest  on Treaty 1 territory, despite having lived in Winnipeg for the majority of her life.

Those in attendance took part in drumming, singing, and a round dance to show solidarity with INM, which celebrates the resilience and resurgence of Indigenous peoples across Canada.

“It’s not just about a round dance at Portage and Main, it’s about showing our province that we can gather in love and protest with song and dance to help open the lines of communication,” Hickes said.

Moving forward, Hickes said that INM is about “communicating to our settler friend[s] what Idle No More stands for – and it is not just one thing.” Many issues – such as inequitable access to services, lack of access to clean drinking water, and overrepresentation of Indigenous youth in government care – must be addressed, she said.

“These are issues that need to be brought up,” Hickes said.

Locally, INM has been working closely with the Bear Clan Patrol, a community-based crime prevention organization in the North End that provides “personal security in the inner city in a non-threatening, non-violent and supportive way,” according to the group’s website.

“I personally am so thankful we have such a strong relationship with the Bear Clan who work on our streets in our communities to help one-on-one with the people and let community know there is safety,” Hickes said.

Tyra Cox, program officer at Canadian Feed the Children, an organization that focuses on building sustainable community resilience though partnerships in Canada and around the world, said that she has followed the work of people within the movement since INM’s inception and “aligns” with it.

“I love the women who started the movement and also those who identify as change makers,” Cox said, referring to Sheelah McLean, Nina Wilson, Sylvia McAdam, and Jessica Gordon, who founded INM in 2012.

Cox said INM has carried forward the conversations pertaining to Indigenous rights, compelling Canadians and those in power to pay attention to the injustices suffered by Indigenous populations across Canada.

“So whether that’s on the frontlines or with your families teaching about movements in a safe and secure home, you do what you can for and on behalf of the movement,” Cox said.

Cox also pointed out the importance of implementing United Nations Declaration on the Rights of Indigenous Peoples (UNDRIP), as recommended in the final report of the Truth and Reconciliation Commission.

“I don’t think the government understands UNDRIP because it has not been implemented yet, and the only people trying to implement it that I have seen are other Indigenous peoples,” Cox said.

In April of last year, a bill was introduced in the house of commons by Quebec NDP MP Romeo Sanganash which seeks to align Canadian law with the principles of UNDRIP.

The bill – Bill C-262 – was debated in the House of Commons for an hour in December of last year and is scheduled to be debated for another hour in February. A vote on a second reading scheduled for March.

Commenting on the provincial government’s commitment to addressing the issues raised by INM, Hickes was not hopeful, noting the opposition NDP has postured a more open position.

“Sadly, I do not think any of these issues INM are on their radar,” she said. “It’s sad really, as the party in power seems the least involved in Indigenous issues.”

Public education for the public good

Canadian strategy on climate change all style and no substance

Researchers examine the question of genocide in Canada