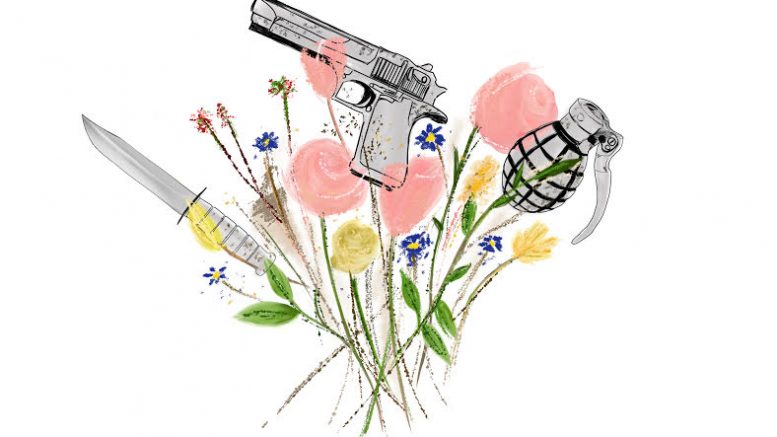 A modern-day adage is that we have become desensitized to violence. In immediate defiance of the so-called moral arc of the universe, we have outpaced desensitization; in contemporary society, violence has become aestheticized.

Considering we live in a liberal-democratic society – a political system built atop the humanist philosophical revolution of the Enlightenment – we must be wary when our artistic practices consistently glorify the deformation of the physical embodiment of what humanism prizes: the human agent.

In 1969, the American National Commission on the Causes and Prevention of Violence reported that, within the previous decade, depictions of violence in children’s cartoons had increased by 94 per cent. Prime time television had ratcheted up the depiction of violent acts by 81 per cent.

Current data supports the conclusion that violence increasingly permeates popular media. The American Association of Pediatrics, for instance, has publicly endorsed studies that show violence to be an empirical regularity in film and television. Findings show not only that all American-produced animated feature films between 1937 and 1999 portrayed violence, but that the average American will be exposed to 200,000 violent acts on television prior to age 18.

The spectacle of violence is nearly ubiquitous across our public mediums. Yet the nature of violence – in both concept and execution – has steadily become wrapped up with status and glamour as an aesthetic motif in its own right.

For instance, the National Television Violence study, conducted between 1995 and 1997, found that much of the violence portrayed in television programming was of a “glamourized” or “entertaining” nature.

Relatedly, a 1998 study bankrolled by the National Cable Television Association determined that 40 per cent of all violent acts on television are committed by characters framed as heroic, attractive role models.

Hard data aside, one need only take a cursory glance of popular media to realize the extent to which violence has become stylized. The cinematography of Quentin Tarantino infamously instrumentalizes violence for the sake of elaborate choreography and praiseworthy camera shots. In this sense, Tarantino is picking up on the rich history of American sensationalism in aestheticizing violence: making it cool, the stuff of principled action, a necessary tool in the repertoire of the powerful.

Even using physical violence as an expression of humour, as in the tradition of slapstick comedy, has the effect of debasing the human body for the sake of hearty laughter at the effects of brute force on the frail human form.

Given that individuals are inundated with media flows through unprecedented access to information via the Internet, society has become immersed in the deep end of personal formation by way of cultural influence. It would be absurd to deny the influence of popular media in an era of historic growth and equally absurd to deny increasing levels of stylized violence therin.

William Friedkin’s 1973 film The Exorcist depicts the desecration of the innocent body of a child and inspired an intended revulsion in viewers. The Saw franchise of the 2000s and 2010s, arguably an exercise in body horror with no modern competitor, induced no such widespread reaction. Between a film in the early 1970s that saw a young girl’s body temporarily degenerate into a corpse-like being whose head spun, and films across the 2000s that portrayed skulls cracked, bodies splintered, and ribcages thrust open – only one provoked fainting spells and flights of terror in their audiences. It was the movie that featured a little girl with the voice of a long-time smoker.

The massive popularity of the Saw saga problematizes cinema insofar as its efforts to paint human carnage onto the canvas of the silver screen has become more and more respectable as pieces of art. Progressively aestheticizing violence, the film series abandons its original, albeit flimsy, plot device of brutal torture as didactic moralism in place of the extravagant and senseless deprivation of human life through as elaborately cruel a means possible. The Saw franchise comes out in favour of gratuitous violence for its own sake – popularizing “torture porn” as a sub-genre in horror films – and has been rewarded with more than $873.3 million at the box office.

How can we take ourselves seriously as a purportedly humanist society when more and more of us faithfully feast on the very visual violation of that humanity? With a society allegedly founded on the principles of respecting human worth, dignity, and freedom, our popular media runs rampant with the symbolically savage desecration of the human form.

The increasing prevalence of aesthetic violence in contemporary media – and, perhaps tangentially, our increasingly nonchalant reactive attitudes to violence – is extremely disturbing.

Were we to live in a political society truly dedicated to celebrating the value of human beings, then one would expect these cultural expressions to be oddities, outliers, anomalies: not constituting the rising statistical trend of graphic gore as art.