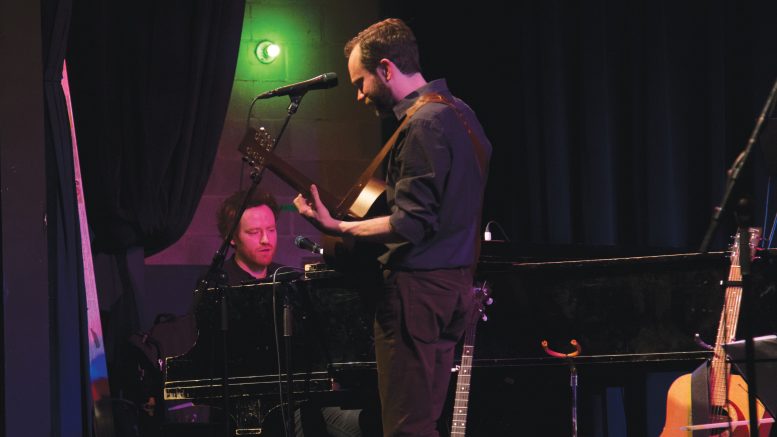 Heavy Bell has crafted a full and evocative narrative in their new album, By Grand Central Station, which was released Jan.12, one day before the first show of their tour in Winnipeg on at the West End Cultural Centre.

The album, was composed by locals Matt Peters and Tom Keenan and it is based on the 1945 novel and masterpiece of poetic prose By Grand Central Station I Sat Down and Wept by Elizabeth Smart. Some of the album’s lyrics are taken directly from the novel and set to music, which sounds much more like an animated journey or personal tale than a pop-y, folky album arranged with more strings than usual.

Peters is best known as front person in local indie-pop band, Royal Canoe, and Keenan for acting as well as songwriting. The two have collaborated on a stage production of Shakespeare’s The Winters’ Tale and Richard II, By Grand Central Station is another ambitious move by the duo for their first album which moves farther away from their typical musical projects into a realm of prose-inspired experimentation. “Monterey” opens with a simple melody on piano, rising gently until joined by string instruments and Peters’ and Keenan’s vocals which are sung in unison for the majority of the album. They sing a short story over the simple and swaying piano line, and gentle horns reach up to fill the space with motion when the vocals go quiet. The combination of elements makes for a catchy, instinctually poppy song played by an unexpected arrangement

The entirety of the album, which took eight years to complete, is marked by the careful composition of each song. The album continues to “It Is Coming,” which picks up where the first song left off to continue our journey with Smart. A gentle choir joins in for some of the song, matching the melody being performed on other instruments.

Selections of the novel create the lyrics centered on themes of love and heartbreak, as well as clips of Smart reading passages directly from her novel. It sounds almost churchlike, between the chamber orchestra and choral arrangements, and is reminiscent of old English ballads performed by wandering minstrels. Peters and Keenan are stepping into an ancient tradition in releasing this album, one that is not seen often in today’s pop culture.

However, the album retains a contemporary feeling, weaving pop melodies into trumpets and cellos and the various instruments involved in bringing this story to life. The album moves through moments of joy, lightheartedness, moments of pause, reflection, and some somber moments of quiet and lamentation.

Some highlights include the speed and playfulness in “O Waste of Moon,” the pensive and captive rhythms of “I Am Going to Have a Child,” the subtle yet vibrant Begonia on harmony, and an overall mastery of composition. Peters and Keenan make full use of their instrumental and compositional talent to escalate, simmer, diminish and prolong the emotional movement of the narrative. Often the duo keeps things sparse and effective, leaving space for the weight of each note to settle onto your skin.

Heavy Bell has begun as a remarkable and outstanding ensemble with their first release.

Winnipeg was the first stop of seven for Heavy Bell, as they embark on a tour with their long-awaited album.

The show opened with the simple and sweet quirkiness of Christine Fellows. The solo folk-pop artists sang captivating tunes including songs of her best friend, Carmen, and her bird, Pickles. Fellows fittingly also shared some of her favourite poems set to music, which was a great transition to the headlining performance. The audience was in the palm of her hand as she took people on a journey of metaphorical lyricism that was by turns charming, funny, and heart-melting, while plucking along on her ukulele or behind the keys of the piano, Fellows’ crystal-clear voice echoed over the crowd in a spoken style that is typical in the folk-pop genre.

For those unaware of the context of the show and album, Peters and Keenan introduced the poetic novel and the history of the project to the audience, before playing the album from beginning to end.

In an interview, Peters described the show as a stand-alone piece inspired by Smart’s novel. “Our intention was never to tell the story of the novel with this album. We tried to choose passages that felt the most lyrical and vibrant,” he said.

“The novel chronicles a love affair [Smart] has with a married writer from England. The songs are mostly snapshots of her intense inner journey through this volatile relationship – the ecstatic highs and the debilitating lows.”

The show was named one of the five “Hottest Tickets in Canada” by the Globe and Mail, which left Heavy Bell with high expectations from the audience. Simply put, they delivered. Aside from the core eight musicians, theatre actresses Sarah Constible and Alissa Watson joined the stage to recite passages from the novel, and local singer Begonia, who performed on the album, was announced earlier in the day as a special guest for the Winnipeg show.

In an interview, Peters explained the process of finding musicians for the live shows, as there were so many people involved in the creation of the album. “For this coming tour we had to tighten the arrangements a bit to pare down the ensemble to eight players and we wanted instrumentalists who could do double duty as singers,” he said.

“It’s almost entirely a new cast of players for the live show. We’re lucky we live in a city with so much to offer in that regard.”

Peters and Keenan sang primarily in unison slipping in and out of harmony. All but two of the eight core musicians on stage sang as well as played their respective instruments which gave the performance a varied landscape, at one point the many voices flowed into a cascading waterfall of sound with a perfectly executed round passed from member to talented member. The harmonies of the pure and clear voices brought Smart’s prose to life and conveyed the emotion of the words into a living, moving piece.

The lyrical and instrumental phrasing made the duo’s ambitious effort of converting a novel with nonrhyming and ununiform lines to a piece of music a successful venture. The emphasis on certain words and syllables, which created a song rather than a simple recitation of prose was beautifully executed, the music following the time signature created by the prose rather than having the prose fit in to a box of typical song structure.

The album took eight years to create, though the initial composition of the songs took place over the course of a few days. The supergroup of professional musicians were extremely tuned in to one another, with attentive eyes on one another and well-choreographed, seamless timing, nodding in unison while the songs flowed from one to another with no space lost to banter.

The show comes highly recommended. It was a perfect combination of recited prose, ambient music, pop, and orchestral sounds. The universal theme of love was at the core of the novel, album, and performance, with all its highs and lows set to music that was so varied across the performance, also seemed to carry a feeling universal accessibility.

Visit heavybell.com to purchase tickets for upcoming tour dates, to listen to the album, and lyrics.

Hop on over to Black Rabbit