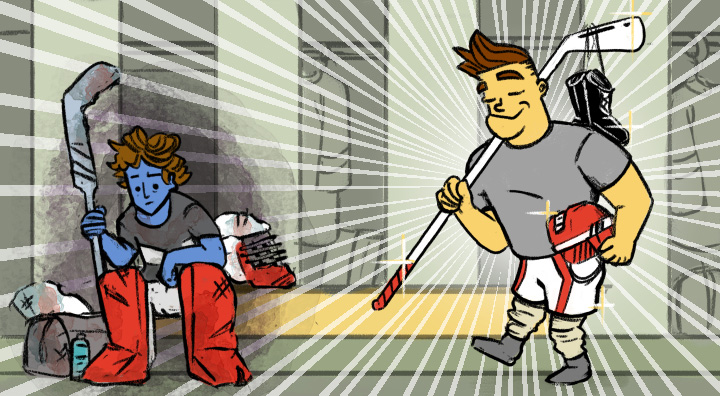 The idealized version of hockey we see emblazoned on the $5 bill no longer exists.

Hockey has changed a lot over the years. Yes, this is a fairly obvious statement, but it seems like the Canadian populace hasn’t noticed. I should preface this with the statement that I have an extreme love and passion for the game, and would like nothing more than the best for my favourite sport.

Watching the World Junior Hockey Championship over the holiday break always brings out the nostalgia in Canadians as they huddle around their televisions, placing their national pride on the shoulders of 19-year-olds. This was especially true when Canada played the U.S. outdoors at New Era Field in Buffalo, the championship’s most recent iteration.

Except the idealized version of hockey being played outdoors that so many Canadians have in their heads isn’t as prevalent as days gone by. Watching the game, I wondered how many of these Canadian kids grew up playing hockey on outdoor rinks.

Hockey has become an increasingly elitist activity. For a family to send their kid to an academy like the Canadian International Hockey Academy – the type of program attended by Connor McDavid and 11 other members of the 2015 world junior team – it would run them about $53,000 for a year’s tuition. Kids are being groomed all across the country to become hockey players in hockey academies and power camps.

Gone are the days of spending hours on the outdoor rink skating to the tune of your own beat. This has been replaced by the regimented schlepping hockey bags into the backs of minivans going to the sixth practice that week. If you want your kid to make it to the NHL, you have to give them the best chance to do so.

I often jokingly say to people that my parents are the reason I am not in the NHL today, unless anyone’s general manager wants to take a chance on a late-blooming 21-year-old. Although it is meant to be taken as a joke, there is a kernel of truth to it.

Had my parents slapped hockey skates on me the second I emerged from the womb, and thrown me in every power camp and skating lesson with every personal trainer available to me – maybe, just maybe – I could have developed into a half-decent hockey player.

Instead, I learned how to skate on an outdoor rink, at the neighbourhood park. Some of my fondest memories of the game come from that rink. I don’t want to make a sweeping generalization, but I bet a lot of the gold-medal-winning Canadians don’t have too many memories of outdoor rinks.

When I would go to the outdoor rink while I was growing up and playing competitive hockey, a majority of the guys there did not play any kind of organized hockey, whether it was due to their parents not having the money, or only a fleeting interest in the game.

The great Bobby Orr, who grew up in Parry Sound, Ont., played hockey on a frozen river and said it helped shape his iconic style of play. His freewheeling style of carrying the puck as a defenceman revolutionized the game of hockey.

Kids do not get that freedom anymore, not now that the game is increasingly a competition of whose family can spend the most money on training. Instead, kids are locked into corporate arenas with Tim Horton’s to warm the gullets of their watching parents.

Canadians love to fetishize the outdoor game as if it still has relevance in developing the next McDavid or Sidney Crosby. It doesn’t. A fat wallet is the path to success.

It’s gotten to the point where hockey kids are not playing any other sports. The Ottawa Citizen released a fascinating three-part series last year about the benefits associated with being a multi-sport athlete. The results were shocking. The kids who played hockey year-round could not manage a somersault, or even run backwards. Playing multiple sports helps prevent injury, teaches new skills, and helps kids get a break from being confined to one activity.

And there’s the rub. With this current system, we are developing hockey players. Not athletes. At the end of the day, we shouldn’t streamline kids into just one sport. The greatest hockey player of all time, Wayne Gretzky, shoved his hockey bag in a closet during the summer and played baseball and lacrosse. Steven Stamkos and John Tavares also both played other sports in the summer months.

Playing hockey for fun seems to be dying a slow, miserable death. As minor hockey registration declines, partly due to the fact that the sport has become hypercompetitive, parents are choosing not to enrol their kids in hockey because there is too much emphasis on producing elite athletes rather than having fun and developing life skills.

The next Great One could be right under our noses, but they could be off becoming a mediocre basketball player because their parents thought hockey was too competitive or just didn’t have the money.

Bisons first half wrap up

U of M home to hockey robot