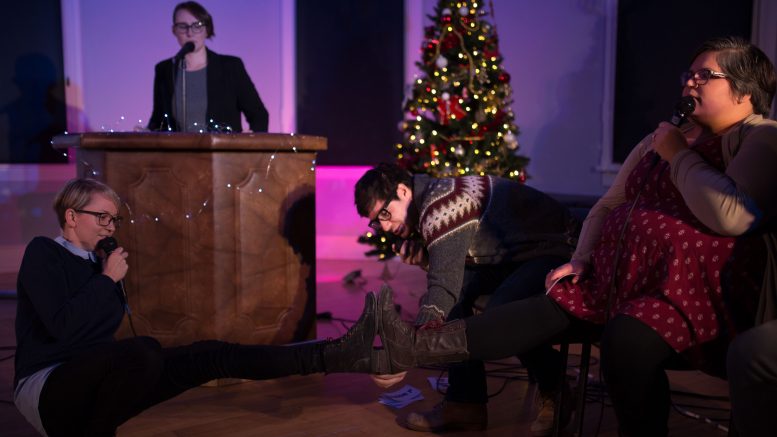 The goal for performers is to guess whether the opposite team is lying in each of three rounds. In the first round, each team member takes turns reading a statement off a card and answering questions from the opposite team. The questioning team then decides if the comedian is lying, and the truth is revealed.

For their most recent show on Nov. 28, Angie St. Mars from local sketch group President Bear comedy, and Aaron Pridham of Free Snacks comedy faced off as captains of their respective teams.

Also playing the game were comedians Elissa Black Wolf Kixen and Aaron Merke, who joined Pridham’s team, while St. Mars had Jesse Bercier and Johanna Burdon on her team. The evening was hosted by RobYn Slade of Outside Joke.

“I like the concept of lying through your teeth and trying to make it believable,” Kixen said about the evening.

“Just because in society […] it’s such a taboo subject, of lying and not lying, in the instance of a game where you’re supposed to lie and make people believe your lies, it goes against everything you’re morally taught,” Kixen said.

In the second round, a person’s photo is shared on the projector for all to see, and each team member has to explain how they know this person. The opposing team then asks questions to determine who is telling the truth. The third round is a speed round, similar to the first but team members are only permitted one question.

Paul Little is the co-producer for the show, alongside Leah Borchert.

“The biggest basis is a particular British game show that I sort of stumbled upon on YouTube about a year and a half ago and binge-watched,” Little said, referring to the British comedy series called “Would I Lie to You?”

“I thought right away, this could work in a live format, and it could be tweaked and work really well especially with improvisers, and other comedians,” Little said. He said he began to share the idea until enough friends wanted to be involved that it became possible to produce.

“We were able to start really talking about how are we going to put this show together, who are we going to get as hosts,” he said. “That all started happening in spring this year.”

The first edition took place on Aug. 17, 2017. Little says they are hoping to host the show on a monthly basis.

“It’s not the same as anything else out there, and basically you’re seeing seven performers at once but not in a way where any one outshines anyone else,” Little said. “You might see in a big improv troupe not everyone gets stage time. But with the game show everyone is given their turn and the chance to ask questions and get in a good joke or a good line.”

“I think it’s a good way to see a bunch of different comedic perspectives in one big hour show,” he said.

Kixen said she appreciated the format of the show, and that she would participate again.

“In improv, and just in comedy, the point is to get your audience on your side, you know, through any means possible,” Kixen said. “But I’ve never just flat out lied and made things up just for the sake of a game.”

“It was one of the few shows I could take my kid to, and he really enjoyed it too.”

Information on the date of the next event will be posted on www.purpleroom.ca