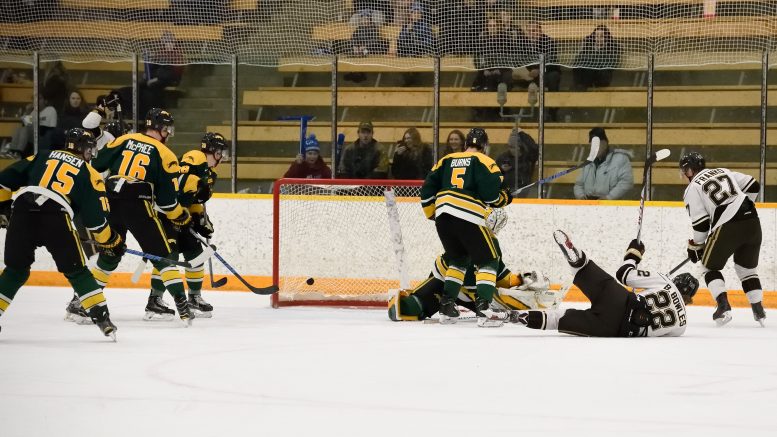 Riding a three-game winning streak into this weekend’s action against the University of Lethbridge Pronghorns, the Bisons stand at 14-8-2 and have already punched their ticket to the playoffs.

In a game that would make any coach sprout a few grey hairs, Manitoba came out on top in an 8-6 barn-burner. Despite the close score, this game never seemed out of reach for Manitoba, who actually found themselves down 1-0 three minutes into the first when Ben Duperreault buried a breakaway chance.

That goal woke up some kind of beast, as the Bisons went on to score four unanswered goals to end the period. This four goal flurry included a nifty goal from Michael St. Croix after a slick behind-the-back feed from Kamerin Nault.

After a sleepy start to the second period, the Cougars pounced, and Landon Peel rushed his way into the Bison zone to make it 4-2 five minutes into the second. Quintin Lisoway, Brad Bowles, and Brett Brooks made it 7-2, but Jordan Burns answered back for Regina to make it 7-3 after 40 minutes.

Justin Paulic made an appearance in net for Manitoba in the third period and Regina popped a pair of goals on him early to make it 7-5. Lisoway quelled the comeback attempt with a powerplay marker late in the third, or so he thought. Stephen Langford roofed a one-timer to make it 8-6, and finally the scoring stopped.

“High scoring game, not necessarily how we want it to go at this point in the season,” said Bison head coach Mike Sirant. “It showed depth in our team with the number of guys who scored in different situations and different ways.”

Manitoba tightened up defensively on Saturday for the matinee rematch, winning 7-1.

Remi Laurencelle broke the deadlock midway through the first period, with Joel Schreyer a minute later to double the lead.

Burns got on the scoresheet again cutting Manitoba’s lead in half early in the second period. That was all the scoring Regina would get in this game, as Nault popped his 11th of the season a couple minutes after Burns’ marker. Lisoway continued his good weekend by scoring midway through the second, and Warren Callis scored his third of the year in the final minutes of the second.

Justin Augert scored an early powerplay marker in the third and, in the final minute of the game, Lucas Skrumeda rubbed salt in the metaphorical wound by scoring his second of the year. Byron Spriggs stayed in the crease the entire time in this game, making 26 saves.

Manitoba’s offence was the story of the weekend, with 12 different players registering at least one goal in the pair of games.

The Bisons stay at home this weekend for a pair of games against the Lethbridge Pronghorns on Feb. 2-3 at the Wayne Fleming Arena.

Winnipeg Jets push for the playoffs