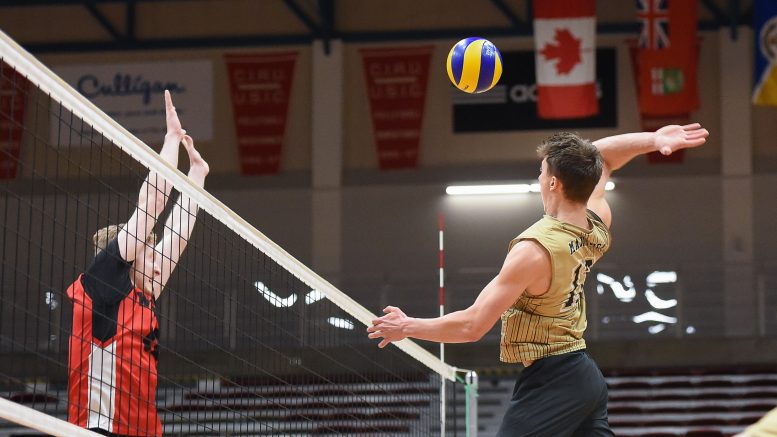 Bison captain Dustin Spiring (#12) goes for a kill as a Wesmen attempts to block at the 27th Annual Duckworth Challenge at the Dr David F. Anderson Gymnasium, University of Winnipeg, on Jan. 18.

After the women’s soccer teams drew 0-0 on Oct. 8, the two schools were tied. The 27th edition of this challenge wraps up tomorrow with the basketball portion at Investors Group Athletic Centre.

In the first game and Duckworth Challenge portion of the volleyball games Thursday the Bisons (7-10) took out the Wesmen (1-16) 3-0.

Manitoba jumped out to a 16-11 lead at the technical timeout in the first set, the Wesmen crawled their way back to make it close, but left side hitter  Josie Abbott smacked home the set winning kill. The score of the second set was a carbon copy of the first, with Manitoba again winning 25-17. Manitoba rolled on to win 25-19 in the third set to take the match win.

“I felt we played clean, it’s a short week to turn around after such a hard weekend,” said Bison head coach Ken Bentley referring to last weekend against ninth ranked Trinity Western. “We can’t afford any slip ups, the teams that we’ve lost to we’ve been really competitive with. I mean the top teams in our conference, we’ve closed the gap to just millimetres, that’s where we are.”

Following in the footsteps of the women, the men won set number one 25-17. The second set was significantly tighter, with no team able to establish a commanding lead. Bison setter Dylan Sutherland had some cheeky tips to earn a few points, and a Scott Vercaigne tip ended the set 27-25. Vercaigne finished with 16 kills on the night.

In the third set it was once again close, but Winnipeg pulled ahead 16-12 at the technical timeout. Manitoba clawed their way back to go up 21-20, forcing a Wesmen timeout. Winnipeg eventually forced a fourth set after winning 26-24.

The fourth set followed the trend of the entire match, with Bison Kevin Negus making an incredible diving play to keep the ball alive as well as a huge kill a few points later. Adam DeJonckheere fired home the match point, giving Manitoba the win. DeJonckheere finished with 13 kills, and seven digs.

The Bisons and Wesmen resume niceties at Investors Group Athletic Centre on Saturday, the men play at 1:30 p.m. and the women at 3:15 p.m.

Back in the big show