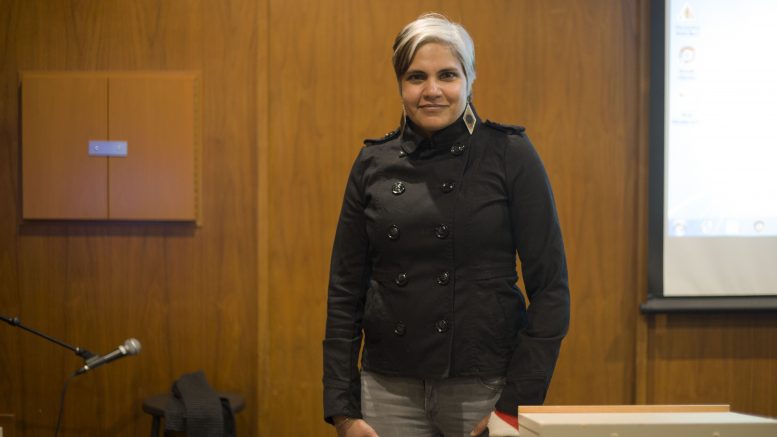 The Institute for Women’s and Gender Studies at the University of Winnipeg (U of W) hosted New School university professor Jaskiran Dhillon for a keynote lecture to discuss her book, Prairie Rising: Indigenous Youth, Decolonization, and the Politics of Intervention, Jan. 18.

Dhillon, an academic and a first generation Canadian who grew up on Treaty Six territory in Saskatchewan, is an assistant professor of global studies and anthropology at the New School University in New York City.

She is noted for her study of political movements centred around decolonization, environmental justice movements such as the resistance against Dakota Access Pipeline, and the role played by Indigenous youth within these movements.

Dhillon spoke about Indigenous-state relations and the colonial nature of state intervention policies in the lives of Indigenous youth, which she said are “lived expressions of racism, both obvious and subtle that have resulted in a strained relationship between Indigenous and non-Indigenous residents in Saskatoon.”

Dhillon’s book focuses on the city of Saskatoon, which is divided into east and west sides by the South Saskatchewan river. The west side of the city, Dhillon said, is home to Indigenous people living in deep-rooted racialized poverty.

“Indigenous youth have told me about the palpability of these hostilities when they describe their experiences of moving from the Westside to the Eastside of Saskatoon across the South Saskatchewan River over one of the city’s eight bridges.

“They have told me about the way business owners stare at them when they enter restaurants, bars, and clothing stores they are not expected to enter, when they break the informal codes of conduct in an overtly segregated city,” Dhillon said during her address.

Dhillon said it was a common sight to see police officials pull over Indigenous youth and engage in a rough line of questioning, which she added is a reflection of the “interminable power of the criminal justice system.”

Growing up, Dhillon said she “would often see things happening on the street, Indigenous people being verbally abused, people yelling at them in grocery stores, or [in] department stores being followed.”

Dhillon mentioned that her upbringing in a “politicized household” helped her comprehend the history of Canada as her parents engaged in detailed discussions, about the country they chose to immigrate to with her from a very young age.

Calling this a “school-to-prison pipeline,” Dhillon noted that the phenomenon, acknowledged in the United States, occurs in Canada as well.

As schools develop zero tolerance policies towards violence and anything that can be described as problematic behaviour, schools involve law enforcement in discipline, which Dhillon argued amplifies the scrutiny of Indigenous youth in the public education system.

“They are often minority students, students of colour, or in this case Indigenous students that then develop a relationship with the police,” Dhillon said.

“Historically, Indigenous migration to Canadian cities was viewed with scepticism and fear, solidifying the belief that their rightful place was on the reserve,” she said.

In 1960, the government of Saskatchewan submitted a report to the Joint Committee of the Senate and House of Commons on Indian Affairs.

The government of Saskatchewan issued a statement saying “the day is not distant when the burgeoning Indian population, now largely confined to reservations, will explode into white communities and present a serious problem indeed.”

Fast forward many decades later, a report released by the Department of Justice in 2004 confirmed the disparate representation of Indigenous youth in prisons.

Dhillon pointed out that nationally the percentage of Indigenous youth in prison sits at about 33 per cent, even though they make up only five per cent of the population. In Saskatchewan, 88 per cent of youth in custody are Indigenous.

Calling it an “astounding” number, Dhillon said that “incarceration rates mirror the intensity of settler-colonial confrontation between Indigenous youth and the criminal justice system.”

“It is short-sighted and dangerous to assume that the settler state is simply going to step in and right its wrongs – regardless of how many more inquiries are called or reports commissioned or participatory strategies are developed,” Dhillon said.

Representation politics, she said, does little to shift the dynamics of power if institutions focus solely on the participation of representative Indigenous communities without thinking about operating outside state structures.

“This means we need people working in settler state spaces and agencies that embody a politicized understanding of Indigenous-state relations and the stronghold state institutions have on the lives of Indigenous youth through micro, everyday actions,” she said.

In addition to thinking about the structure of the institutions, youth programs, and public services, Dhillon said government should abandon “the language and practice of service delivery and instead” focus on the “realities of colonialism when considering program creation and advocacy alongside Indigenous youth.”

Dhillon said that hiring practices and public programming that make up institutions of higher education need to make concrete changes in the curriculums being taught at post-secondary institutions.

“The social workers, youth workers, probation officers, nurses, doctors, aid workers, criminologists, and police, along with many novice researchers, are being ‘trained’ within our post-secondary institutions,” she said.

“What forms of critical pedagogy are we using to challenge the dominant modes of address invoked in everyday references to Indigenous peoples across Turtle Island? How are we ensuring that the white-washing of our fields of study and program areas are not feeding into the production of a new set of professionals willing to take up the goals of the settler-colonial state?”

Implementing Indigenous course requirements, which the U of W introduced in 2016, is “excellent” and “absolutely central” to advance the learning about Indigenous people and Indigenous worldviews, Dhillon said.

The U of M has debated following suit with its own mandatory Indigenous credit requirements.

“Forcing students to sit in a class that they would otherwise not be willing to take does the work of providing them with some exposure to the history and the politics of the country,” Dhillon added.

Indigenous course requirement a ‘good step, but only one step’