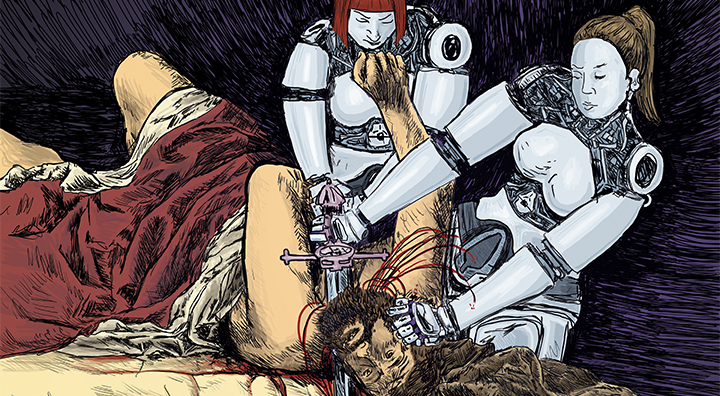 Robots are coming – in more ways than one.

Advancements in artificial intelligence, says U of M associate professor of philosophy Neil McArthur, are such that sex robots will soon not be just a sci-fi wet dream but concrete fixtures of human reality. Call them sexbots: an endearing nickname that may well one day enter a roster that currently includes pet names such as ‘babe’ and ‘honey.’

Except this already happens in the fantasy lives of men everywhere, where the ‘sexbot’ is a human woman. With the virile rise of pornography – children aged as early as nine are being exposed to explicit material, where boys aged 12 to 17 are the largest consumers – people everywhere are witness to degrading, dehumanizing depictions of women as mere sex objects geared toward the goal of male orgasm.

That is, pornography is rampant with the subjection of women, be it through sexual means.

Depictions of women in popular, mainstream Internet pornography not only consistently fails to address women’s sexuality but ignores its existence altogether. Only 17 per cent of mainstream Internet pornography shows woman actors as they experience orgasm. In this paradigm, heterosexual sex merely happens to women. This objectification of women has disturbing consequences: a meta-analysis of 22 academic studies over seven different countries found that the consumption of pornography is “associated with an increased probability of the use or threat of force to obtain sex.”

During the launch for Robot Sex: Social and Ethical Implications, for which McArthur was a co-editor, he claimed sexism, misogyny, and pornography are not so linked. Truthfully, there have been studies that demonstrate pornography as a positive tool for developing sexuality: be it in navigating one’s orientation, increasing intimacy with a partner, or learning how to have safer sex.

Yet these benefits are marginal, even irrelevant, when compared to the effect pornography has on women through their objectionably objectifying depictions.

Research today – linking back to experimental work conducted in the ‘80s on the impact of pornography on the prevalence and acceptance of rape and sexual violence – suggests sexual violence is not an anomaly but a normality in mainstream pornography.

One should be suspect as to whether tropes such as the feminine submissive would even exist were we not in a culture that defiles and demeans women’s human status through means not exclusive to but including pornography.

Clearly, women are already seen as sexbots in pornography. Yet there is reason to believe the introduction of actual sexbots would not only compound a pre-existing problem but introduce an issue in its own right.

We can assume sex robots would be subject to the same sexual marketplace that runs mainstream pornography – an entirely libertarian one, subject to little content regulation and driven nigh entirely by the lust of the everyman.

Sexbots – or, women, sexually robotized – will become the simulacrum upon which an ideology of sexual violence will be mapped with frightening resemblance to reality. Given the data that links pornography with sexual violence, there is reason to doubt the “outlet” thesis: that sexbots instead of humans would receive the brunt of violence. Given the predominance of sexual violence in contemporary society, one could flip the causal arrow in this equation and wonder whether such an “outlet” would actually channel and enhance sexual violence.

Yet we also have reason to distrust this technology along humanitarian concerns. What would behaviour toward women look like should every man hold prisoner in his closet eerily robotic depictions of his female peers?

It is easy to celebrate the rise of sex robots under the guise of “sex positivity,” or egalitarian concerns regarding the limited availability of sexual partners for certain demographics of society. Yet there is nothing positive in obscuring and neglecting the reality of material and symbolic violence enacted on women in mainstream pornography, that which would likely be additionally transposed onto a robotic sisterhood.

Even if the hotly contested research that claims pornography is not correlated with violence turns out to be true, the onus remains on pro-pornographers to justify the practice of consistently depriving women of their agency in pornographic media. They must further explain and offer justification for why so much pornographic media displays hostile aggression toward women.

Nor does debunking the anti-porn violence argument offer any acceptable answer regarding the problem of how women are dominantly represented as vehicles for male sexual pleasure, lacking sexuality in their own right, and further dolled up as mere objects for male use.

Furthermore, we ought to be highly skeptical regarding the prospects of pornography – or a liberating wave of sexbots for women – as changing for the better given the current grip of male dominance in the sex industry and our socio-political landscape generally. A minority of women successfully producing humane depictions of women in pornographic media is but a ripple against a tidal wave of male-designed, male-oriented depictions of women as the sexual cattle of men.

As Audre Lorde said, you cannot dismantle the master’s house with the master’s tools. In this case, you cannot beat the dom with the dom’s paddle. We must take a firm political and legal stance against the current subjection of women in society and end the pornographic practices that enable this very subjection. Sexbots would be just another practice to abolish.

Give Grandma a break!

Exploring a holistic approach to wellbeing

A critical analysis of facilitated communication