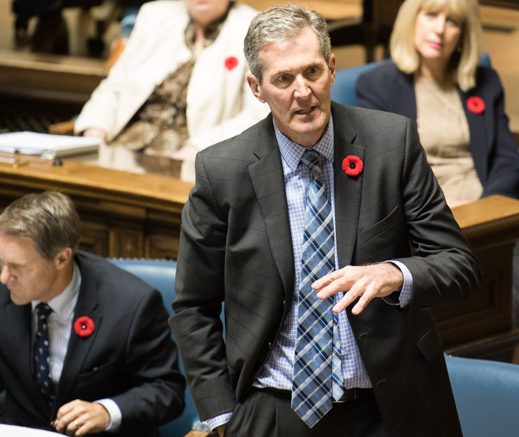 The government’s speech from the throne opening the third session of the 41st legislative session on Nov. 21 outlined the priorities of the government and indicated an overhaul in the delivery of public services.

Manitoba’s Progressive Conservative government plans to reduce public sector spending by cutting senior management in the civil services as a part of a “new public service transformation strategy,” to focus on new early learning strategy to invest in child-care spaces, and to reduce the number children in government care programs.

An overhaul of the delivery of public services

“A new public service transformation strategy will challenge public servants to better understand and meet the needs of citizens, question past practices and experiment with innovative ideas, and harness their collective talent,” reads the speech from the throne. This is in addition to the eight per cent cut in provincial civil service jobs over three years previously announced by the provincial government.

According to the speech, this transformation strategy involves collaboration with the private sector to build public infrastructure, including schools, to reduce the “costly practice of project labour agreements that force unionization of workers.”

Kevin Rebeck, president of the Manitoba Federation of Labour, said he is disappointed with the speech.

“They can keep trying to make that claim. But they got elected on a promise to protect and improve public services and they are not living up to it,” he added.

The throne speech also mentioned the government’s intention to review services provided by both municipalities and the provincial government to reduce overlap and streamline delivery of services,  including road maintenance, snow clearing, and water control and drainage.

Winnipeg mayor Brian Bowman  said the provincial government does not have the priorities of Winnipeggers in mind and argued the streamlining of services will put an undue burden on the two-thirds  of the provincial population living in Winnipeg.

“We don’t want to see decisions dictated and downloaded to the City of Winnipeg and we have seen that on matters especially outside of the basket funding,” he said. “We have seen that with transit funding, certainly with the decision on ride for hire. We are ready to do our part and build the model.”

“But what we have seen is the downloading in terms of the cost of services that are outside of this basket funding,” he added, “and so obviously that is putting a squeeze on Winnipeg taxpayers.”

The government recently ended a 50-50 transit funding deal with municipalities, leaving a $10 million deficit on Winnipeg Transit’s 2018 budget. This resulted in a city budget proposal that includes the reduction of service to 23 transit routes, a 25 cent hike in bus fares, and job cuts.

“We also did not hear specific reference to transit operational funding, which, as you know, was recently cut by the province of Manitoba,” said Bowman. He added that there was also no reference to any long-term municipal funding policy.

“We’re hearing them talking about streamlining the relationship with municipalities,” he said. “Sounds like to me they are going to justify more cuts to the city even beyond what we heard in this past week in terms of cuts to transit [and] cuts to the infrastructure money that is going to the city.”

The provincial government vowed to introduce new legislation to allocate additional resources, programming, and private partnership to improve literacy and numeracy skills among young children across Manitoba and to create new child-care spaces.

According to a Program for International Student Assessment   report – conducted by the member countries of Organization for Economic Co-operation and Development – Manitoba ranks second to last in science and reading and third last in mathematics, when compared to other provinces in Canada.

The exam showed that students in Manitoba are approximately a year behind in reading and science and more than half-year behind in mathematics compared to Ontario, Alberta, and British Columbia.

“Our work will continue to improve outcomes in early years literacy and numeracy by refocusing resources and enhancing the programming during this critical period of development,” the speech reads.

Norm Gould, president of the Manitoba Teachers’ Society (MTS), said it is concerning the teachers were not consulted before a partnership with private enterprise was announced.

“I would think that educators, certainly kindergarten teachers [and] Grades 1, 2, and 3 [teachers], would be able to bring something to the table and talk about the needs that are necessary for students when they enter school,” Gould said.

“The only information I have had is from a news release and from what was reported in the paper,” he added. “So we haven’t been approached formally to participate in the process.”

The government plans to introduce an amendment “to the Child and Family Services Act to remove barriers to guardianship.”

“Moving children from government care to guardianship with adult caregivers has been shown to provide stable, healthy, and lasting relationships that greatly improve the long term social, emotional, and physical health of children and youth,” reads the throne speech.

Kinew said the high number of children in care is a “major issue” and that “no government has done enough” to address.

“When they talk about making the move from foster care to legal guardianship, they missed the first call to action of the Truth and Reconciliation Commission’s (TRC) final report,” Kinew said.

The commission, which investigated Canada’s residential school legacy, issued a report with 94 calls to action to move toward reconciliation between Indigenous and non-Indigenous Canadians in 2015.

Recommendation one calls on “the federal, provincial, territorial, and Aboriginal governments to commit to reducing the number of Aboriginal children in care,” with a focus on keeping Aboriginal families together.

“So as they roll out the details on this plan we are going to be looking to see that there is a firm commitment to ensure that Indigenous kids can stay with Indigenous families,” said Kinew. “If it’s just full steam ahead with opening up the process to legal guardianship without considering the importance of family and community then we could be looking at a situation where young kids in our province are reliving the ‘60s scoop .”

“What caught my attention is when they spoke about social impact bonds, the first area that they are going to move on is with kids in care,” Kinew added. “That gives me a lot of concern because children in care should not be profit centres.”

Minister of Justice and Attorney General of Manitoba Heather Stefanson, speaking to reporters, said the government wants to move kids out of government care programs and into guardianship settings.

“We believe that they should be with loving families rather than in a hotel,” she said. “So that’s the kind of thing we are moving forward on. This is an exciting initiative.”