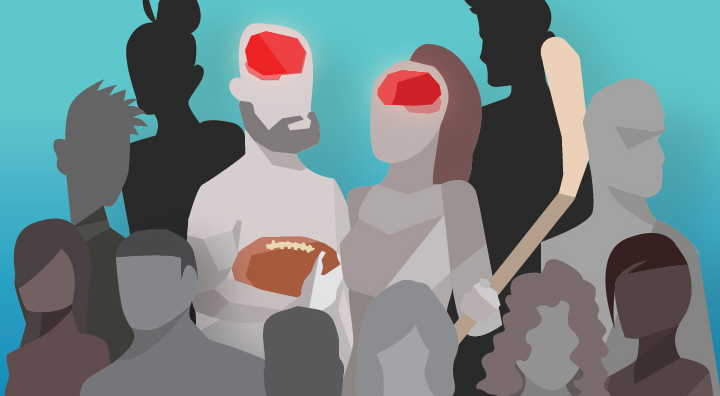 In November, an article was published in the medical journal Neurosurgery by a team of researchers in the U.S. who reported a land mark achievement in the quest for a method to diagnose chronic traumatic encephalopathy (CTE) in living patients.

“We present a modality that may be instrumental to the definitive diagnosis of CTE in living patients,” the researchers stated in the article.

The paper carried forward research published in 2013 in which the authors found patterns in markers seen during MRIs, they used to presumptively diagnose CTE in a living patient, consistent with a probable psychiatric diagnosis. Following the passing of the patient, later revealed to be Fred McNeill, a former Minnesota Viking linebacker, post-mortem brain imaging confirmed that diagnosis.

The researchers conducted an [F-18]FDDNP-PET brain scan on McNeill about four years prior to his death. The scan sends a molecular probe into the brain, which then bonds with abnormal proteins, tagging them to be seen through PET scans. A similar technology has been used to diagnose Alzheimer’s. In the case of CTE  the molecules bind to and tag the tau protein deposits characteristic of the disease.

Tau proteins are essential for normal brain and nervous system function, but fold incorrectly and accumulate in diseases like CTE and Alzheimer’s.

They combined the results of the brain scans with symptom reports by McNeill’s wife, and brain function evaluations to evaluate memory, depression, and anxiety.

Following McNeill’s death, a post-mortem autopsy was conducted and found an increase in tau proteins throughout his entire brain, showing degeneration.

The researchers concluded [F-18]FDDNP-PET may have significant value in the ability to conclusively diagnose the accumulation of tau protein in diseases such as CTE in living patients, and can detect distinct, differential distributions of tau proteins in the brain. They were also able to tentatively confirm the distinct fingerprint of tau pathology left by CTE, by comparing the brain scans and post-mortem autopsy. The authors said that these results, while only based on a single individual, warrant clinical trials to confirm their findings and develop diagnostic methods.

The prevalence of CTE

On May 13, 2011, Derek Boogaard was found dead in his apartment after a night out with his brother. The six-foot-seven Boogaard, known by his well-earned nickname of “The Boogeyman,” had died from a mixture of alcohol and oxycodone. He was 28.

Following his death, researchers at Boston University’s School of Medicine studied his brain, diagnosing the former enforcer with CTE. In Boogaard’s case, the disease was in an advanced stage, far beyond what would have been expected for a 28-year-old at the time, and far beyond what was found in legendary enforcer Bob Probert – who had died the previous year due to heart failure.

Four months after Boogaard’s death, Rick Rypien and Wade Belak – fellow NHLers who played a similar enforcer style of hockey – both committed suicide. They were 27 and 35 respectively. The deaths of these players – who both exhibited mental health issues similar to Boogard – raised serious questions about the role of enforcers, and more importantly head trauma, in hockey.

Researchers have conclusively determined CTE is caused by repeated head trauma, often marked in an athlete who has received numerous concussions. The disease is caused by the presence of hyper-phosphorylated tau protein deposits in the brain, which primarily collects in the medial temporal lobe.

This area of the brain is responsible for memory, impulse control, addiction, emotion, depression, and anxiety. Trauma to this area causes the addictive behaviours seen in Boogard, depression seen in Rypien and Belak, and sometimes violent outbursts like those of former wrestler Chris Benoit – who was also found to have CTE.

To date the number of athletes affected by CTE is hard to pin down, but recent reports indicate that as many as 99 per cent of former, deceased NFL players tested were found to have the disease.

It is also important to note that CTE does not only affect athletes in contact sports. In 2012, former Cincinnati Red and Toronto Blue Jay, Ryan Freel, was found to have CTE following his suicide. Freel was known for putting his body on the line, laying out to make catches and sacrificing his body to snag balls at the outfield walls. He was also known to have multiple concussions.

Then there is Dave Mirra, a former BMX superstar, who committed suicide in February 2016. Mirra was the first extreme sport athlete diagnosed with the disease, after his brain was tested by researchers from the University of Toronto.

There is currently very little knowledge on how to deal with CTE, short of removing players from dangerous situations, and even less is known about identifying it. The only way to diagnose an athlete with CTE is currently through posthumous testing. However, new developments like those recently published may have massive implications on not only diagnosis in living patients and earlier treatment of the disease, but the future of sport.

Having a tool to reliably show the markers of CTE, diagnosing the disease years before an athlete’s death, represents a massive shift. It is something that could change the future of many sports, even signalling their demise.

Both the NHL and NFL have come under fire in recent years, with multiple lawsuits by former players cropping up, and the systematic denial of the link between head trauma from sports and CTE. However in 2016, NFL senior VP of health and safety policy Jeff Miller acknowledged the link between the sport and CTE. The NHL has yet to make any such statement.

The 2016 decision in the class-action suit against the NFL was in favour of the players, resulting in a $1 billion settlement. This was a massive win that represented a huge blow to the pocketbooks of team owners. A similar lawsuit against the NHL could sink the league if changes are not made.

If the lawsuits do not change anything, then the stars of both sports that are leaving in droves could do even more damage.

With the early retirement of NHL stars like Paul Kariya – recently inducted into the Hockey Hall of Fame – due to head trauma, a simple and conclusive test for a deadly disease could push others to leave as well.

“I have no recollection of anything that happened before game six, [in] game six, game seven two days afterwards,” Kariya said in an interview with TSN regarding the famous hit in the 2003 Stanley Cup Final that left him with another concussion.

He was struck by New Jersey defender Scott Stevens in open ice, and was unconscious on the ground for 48 seconds. It was a hit immortalized in hockey history, as Kariya returned to the game, scoring the famous “off the floor, on the board” goal. Unfortunately it remains a moment in his career he does not remember.

Kariya retired from the game in 2010 following his sixth concussion, and reportedly took a few years to fully recover.  Then there is Sidney Crosby – arguably the face of modern hockey and the greatest to ever live – having fans, former players, and doctors questioning his decision to continue playing after his fourth concussion.

The sports world is at a crossroads – or more aptly a breaking point – regarding head trauma and CTE. With conclusive evidence of a link between head trauma and CTE, and the potential for testing that could drive players into early retirement, serious questions need to be addressed.